After the 2014 election we knew we would be losing ground for a couple of years. The crop of incoming conservatives featured many new, terrifyingly crazy anti-LGBT legislators.

We were right to be worried.

We even have three states with pending bills that would make it nearly impossible for transgender students and citizens to even use a public bathroom. Business owners who let transgender people would face fines and lawsuits. Individuals who turn in transgender students would receive $2000 bounties according to the latest bill in Texas.

Pause there for a second.

Let that sink in a little more.

However, these bills are just the continuation of a process. LGBT Americans live in one of two distinct political environments, with very little in-between. We are either full citizens, or are left completely at the whims of the multitudes who would do us harm.

States either offer a host of protections, or they offer very few. The most recent in-depth study of transgender rights looked at state level conditions for transgender people in the US. It clearly showed the gap between our two Americas. There are a cluster of states with high (good) scores where transgender people enjoy protections in almost every facet of life.

There is an even bigger cluster of states with very low (bad) scores where transgender people have virtually no legal protections. Access to any sort of redress requires a federal lawsuit. 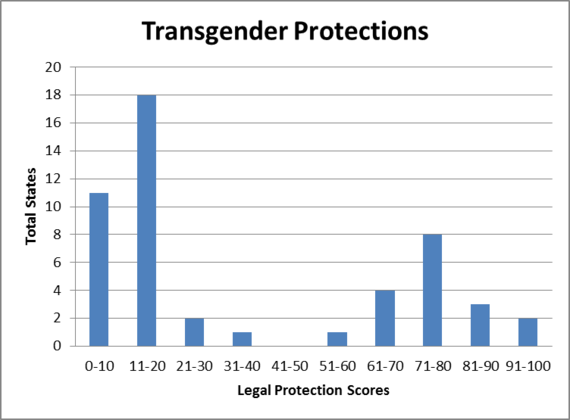 The same pattern holds true for LGBT protections as a whole. 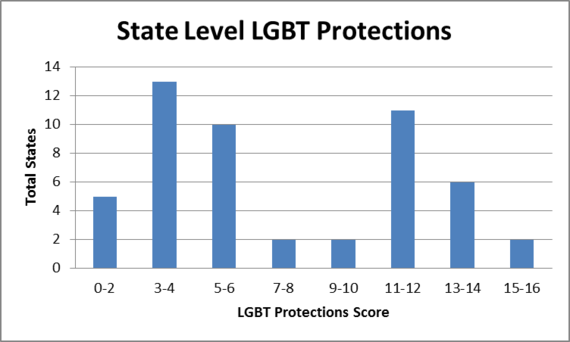 Again, there are two groups, and the distance between these clusters is only going increase as more and more bills pass that are designed to nullify protections and provide religion as a legal excuse to discriminate. There are almost certainly going to be more bills aimed at transgender people, and the attacks will become both more frequent and intense as marriage equality wraps up. Just as conservatives rolled back women's rights with Targeted Restrictions on Abortion Providers (TRAP) laws, they will peel back any protections LGBT people have.

Until there functionally are none.

Additionally, two other factors are working against the LGBT legislatively. One is gerrymandering, which will help keep red states red. It also means that comprehensive federal legislation protecting LGBT people won't happen in the foreseeable future.

The other is the fact that most Americans generally don't care about their candidates' views on LGBT people, no matter how vicious and crazy they are. Case in point: Colorado State Representative Gordon Klingenschmitt.

The result of this widening gap will be an America where more than half the country can marry the person they love, but also be fired, denied housing, refused health care, denied service, and refused public accommodations because they got married in the first place.

Culturally, though, it is already far too easy for people living in states where they live with acceptance and legal protections to forget that this is the exception rather than the rule. When singer Kelly Clarkson was asked about her lesbian and gay fan base, she remarked, "I think it's silly that we're still talking about gay rights. I just live in this world where people are accepted, so it's very hard for me to even realize that that still exists. It's hard for me to wrap my brain around it."

It isn't just Clarkson who lives in something of a bubble of acceptance and legal protections. In a "let them eat cake" moment, one LGBT celebrity remarked that the secret to dating as a queer person is to date other queer people, oblivious to how queer people in most states are being actively driven underground.

And that's the whole point of these kinds of anti-LGBT bills, and especially those focusing on transgender people.

Conservatives want us gone. Their religious leaders deny we exist and claim we are threat to humanity equal to nuclear weapons. Whether we self deport, de-transition, or never transition, they want transgender people to disappear. They're working to make sure we cannot access the health care needed to transition. They've passed bills making it impossible to participate in school activities. They've passed bills making it impossible to get correct government identification documentation.

Finally, bathroom bills like the ones in Texas, Florida, and Kentucky are designed to legally drive us out of the state or back into the closet.

Without a sustained legal effort to push back at such legislation, they may succeed. Oddly enough, all those legal folks who worked on marriage equality may be left looking for a new civil rights battle to fight sometime in late June.

As luck (and religious conservatives) would have it, there is going to be no shortage of prospective clients.