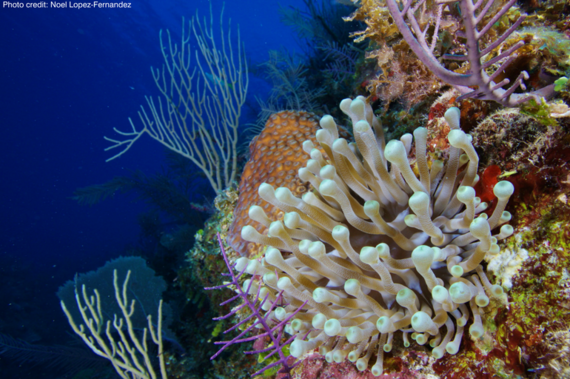 If you love the ocean, you probably know that nearly 30% of the world's coral reefs have been badly damaged, and that the rest are in serious trouble. Many scientists expect that no more than 5-10% of original reefs will survive over the coming 50 years, as global climate and oceans waters warm, seas acidify, sea levels rise and storms intensify. The near disappearance of corals and the myriad organisms that depend upon them would constitute a true biodiversity catastrophe, but also a grave human crisis for the many millions of people who rely upon reefs for their health and wellbeing.

But there is a pathway to a bright future for corals if action is taken, and there are powerful reasons to double down, now, on corals and coral ecosystem management, both to ensure corals' genetic heritage for the future, and to enhance the prospects for communities at risk. With some creative thinking and focus, the future of the coral world does not have to be as bleak as some would have you believe.

Understand, first, that I am not an unbiased observer. My personal exposure to the marvels of coral reefs began decades ago, when my wife and I made our first dives among the incredible Elkhorn and Staghorn reefs in the Florida Keys. Many hundreds of dives followed, on spectacular reefs and coral walls, falling away into the abyss. Vibrant reefs, and swarms of spectacular fishes - with new creatures to discover under every coral head - helped confirm my personal aspiration as a steward of the seas.

Perils of Climate Change
The 1990s and 2000s saw periodic coral bleaching, deteriorating reef health in much of the tropical world, and the near disappearance of magnificent branching corals, including in the Florida Keys. Today, following the Third Global Coral Bleaching Event, even the most remote reefs have suffered significant damage, with more than half of corals dying in many places. These die-offs were caused by continuously elevated water temperatures, lasting much longer than ever before.

And this is just the beginning. As climate shifts over coming decades, only a small fraction of today's coral growing zone will maintain temperatures and acidity profiles that sustain corals. Even hitting ambitious global emissions goals for carbon dioxide and other greenhouse gases will nonetheless imply a significant period of warming that will threaten most corals. That's - inarguably - the bad news.

A Few Rays of Hope
However, I am optimistic for two important reasons. First, scientists are rapidly learning how to identify, protect, propagate and enhance heat-resistant corals, in order to maintain coral species and coral genetic potential. They are also working hard to find and manage those special places that can harbor important coral diversity - the future's coral legacy - while also learning techniques to actively sustain corals in culture and in genetic banks. These "coral life boats" - both out in the ocean and in laboratories - must be an essential element in a strategy for future reefs. Once we begin to reduce warming emissions, adequate genetic material can be available to allow corals to repopulate future seas.

Second, there are tremendous opportunities to get the most out of the other 90% of changing reef ecosystems, through the coming climate transition. We already know a lot about how to manage for reef health and resilience, both by mitigating additional external threats and by directly managing fish populations around reefs (especially large fish, predators and herbivores), in order to minimize damage. Reefs with high big fish abundance are healthier, and are more robust against climate and other threats. The amazing recoveries of reefs following bleaching in Cuba's Gardens of the Queen - where big fish swarm - speak for themselves.

Corals and reefs have been around for more than 500 million years, sustaining ever-changing associations of reef-building animals. Coral reef ecosystems have experienced extensive dieoffs several times in geologic history, and then come back in a vibrant - if different - form. There may even be an inherent power in the tight and complex inter-connections among the changing portfolios of organisms that make up reefs. Many ecologists believe that complex webs of life are more resilient to even profound perturbations, and few ecosystems are more tightly interwoven than coral reefs.

Don't get me wrong - I am not saying we shouldn't be concerned. If we do not win the global emissions fight, coral reefs are toast, to the severe detriment of the planet and its people. I am saying that we have an important and exciting opportunity to save what we can, while also managing the other 90-95% of reef habitats expressly to enhance their ecological condition and resilience through the climate bottleneck ahead. This work can maximize these reef habitats' socioeconomic and cultural values to the people that depend upon them.

It is time to get to work - together and aggressively - to pursue both of these pathways to a future bright with corals.