In August, scientists at Columbia University released a study that identified the contribution that global warming made to the severity of the California drought between 2012 and 2014. Their finding - that global warming increased the drought's severity by 8 - 27% - deepens our understanding of just how damaging and costly even small amounts of global temperature increase can be. This year alone, the California drought has cost the State 2.7 billion dollars, and led to the loss of 21,000 jobs. Beyond that, it has caused tremendous hardship and personal strain for thousands of people, particularly in the agriculture sector.

It surprised me to see just how strongly global warming is already playing it's hand because until now I've tended to think about climate change in terms of large scale, future impacts. But my gaze has suddenly been brought to the very present, and the fact that a small amount of warming is already carrying massive costs.

Earlier this year we crossed a milestone of sorts that nobody celebrated and few people recognised: we clocked up more than 1 degree of warming since the mid 1800s. That puts us halfway at least toward the two degree warming limit countries have committed to through the United Nations Framework Convention on Climate Change. But keeping within the two degrees limit is unlikely at this point, and according to current policies in place the world is on a path to between 3.6 to 4.2°C warming by 2100. Even 2 degrees will bring significant costs to pay, and the burden all too often will fall on those that have done the very least to cause this problem.

That burden is currently unfolding across the Pacific Ocean, as Papua New Guinea plunges deeper into a severe drought. Over 2 million people are facing severe food and water shortages, schools have closed due to water shortages, and according to the Post Courier in Papua New Guinea, many people are being urged to cut back to just one meal a day (see photo). Just have a look at these photos to get a sense of how desperate the situation is turning. 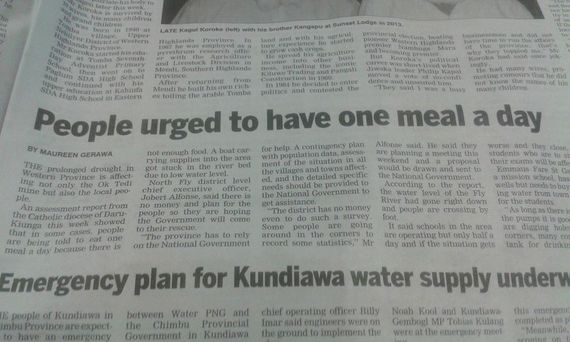 Each year, the heat squeezes more moisture from soils and ecosystems. This is because, as the atmosphere warms, its demand for moisture rises. Just as a puddle evaporates more quickly on a warm day, soils dry out more quickly during warmer years, which are becoming increasingly frequent in most locations globally.

The future for Papua New Guinea is unlikely to get any easier either, where according to the Asian Development Bank, climate change is forecast to wipe 4% of PNG's GDP every year by 2050, growing rapidly to 16% of GDP by 2100 - and that's under a moderate warming scenario. That's a harsh future to face for a country that ranks 171st for greenhouse gasses per capita, and has done so very little to cause this damage.

It's imperative that the global community responds rapidly and in partnership with the Government in Papua New Guinea to minimise the impact of the drought, and there's important lessons that have been learnt from the devastating drought of 1997. And more widely, as the severity and scale of extreme weather events ratchets up in coming years we are going to have to find new ways of scaling up the global response to climate damage. One thing is clear is that there are companies to be held accountable. The Carbon Majors report establishes that "63 percent of carbon emissions in the atmosphere have come from the coal, oil, and gas extracted and cement manufactured by only 90 entities - the "Carbon Majors", which include Chevron, ExxonMobil, Saudi Aramco, BP, Gazprom, and Shell."

Instead of being passed onto consumers, the costs associated with the levy should be absorbed by the dirty energy giants that have long made extraordinary profits. The money raised should be held in an international fund specifically for the provision of financial support--for responding to an extreme weather event that has caused extensive destruction, for example, or assisting with the relocation of a coastal community subjected to rising seas. Even a minimal levy, of around $5 per ton of extracted carbon, could generate more than $50 billion per year to assist hard-hit developing countries.

As our emerging experiences of living with 1 degree of warming demonstrate, finding new sources of relief and support for resilience building is critical. Hand in hand with redress, the experiences should be a rallying call for people to join the global movement that is perhaps at last building critical momentum. It is at least the best way to remain hopeful in the face of such disruption.