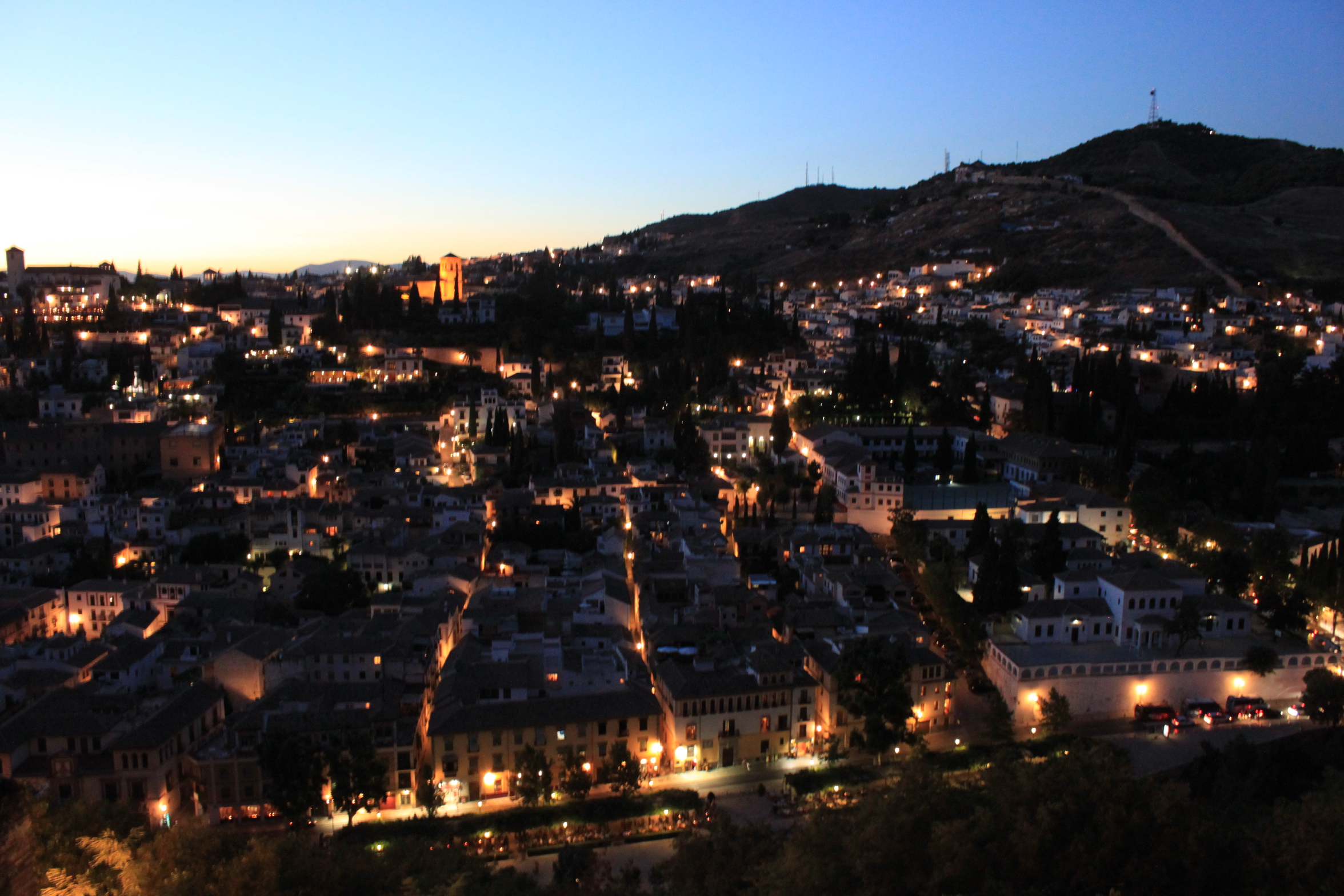 From Granada station, we walked to the Hotel Gran Via 44, passing first through a neighborhood which is best described as 21st century post-recession in character. We made it to the hotel in the historic district soon enough. After some charlie-foxtrot with the air conditioning, which resulted in us contacting the hotel director and sleeping in a different room with better-functioning AC, we hit the rack in preparation for the next day's sightseeing.

Since our ticketed Alhambra visit was not for another day, we spent the day exploring the other sights in Granada.

Our first stop was the Mirador San Nicolas, from where we were able to see an amazing panorama of the Alhambra.

We then headed to the Mezquita Mayor de Granada (great mosque of Granada), where my friend Clay took great offense at the fact that the caretaker assumed he wasn't Muslim just based on his appearance.

We then proceeded to the Palacio de Dar-al-Horra, the home to Aixa, Boabdil's mother. Heading down the mountain back to the city center via the Albayzin district, we passed by the Banos Arabes El Banuelo (Arab bathhouse) and the Iglesia de Santa Ana (church of Santa Ana).

We then had an epic ice cream break at Los Italianos -- a must try, I had it everyday I was there -- and continued on to see the Madraza (the old Muslim University), the Alcaiceria (the Islamic-era silk exchange) and the Corral del Carbon (14th-century inn for merchants, then an inn for coal dealers, and presently a theater). They were setting up for a flamenco show when we arrived, but we did not partake in any flamenco since we had plans for the night.

At some point in the day, when we were searching for paella, we saw the Arco de Elvira, the 11th century gate to the city.

The evening's entertainment consisted of a performance of Vivaldi's "Four Seasons" by the Spanish Quartet, which was very well done and well-received by the enthusiastic audience, with no ill-timed applause at random moments of the performance.

The walls and roof of the Nasrid Palace is packed with such dazzling, intricate work.

The next day was an Alhambra extravaganza. We saw the Palacios Nazaries (central palace complex) and the Alcazaba (fort) during the day, but ran out of time to see the Generalife (gardens). If you're one of those who want savor each and everything, it is hard to cover all in a day.

It was a hot day, so I took a siesta (mid-day nap) and Clay went to some churches and monasteries by himself, requiring him to walk through the bohemian quarter of the city, where he was admonished to look not for the monasteries, but rather to look inside himself.

We returned to the Palacios Nazaries for the night-time tour, where we came up with the brilliant strategy of running to the end of the tour and then working our way backwards so that we could have each room to ourselves for ambiance and photos. And since we had been there earlier that day, we knew what we wanted to have a detailed look at. Since flash is not allowed, you will not get the best photos of yourself -- do that during the day. But it's worth doing the night tour. 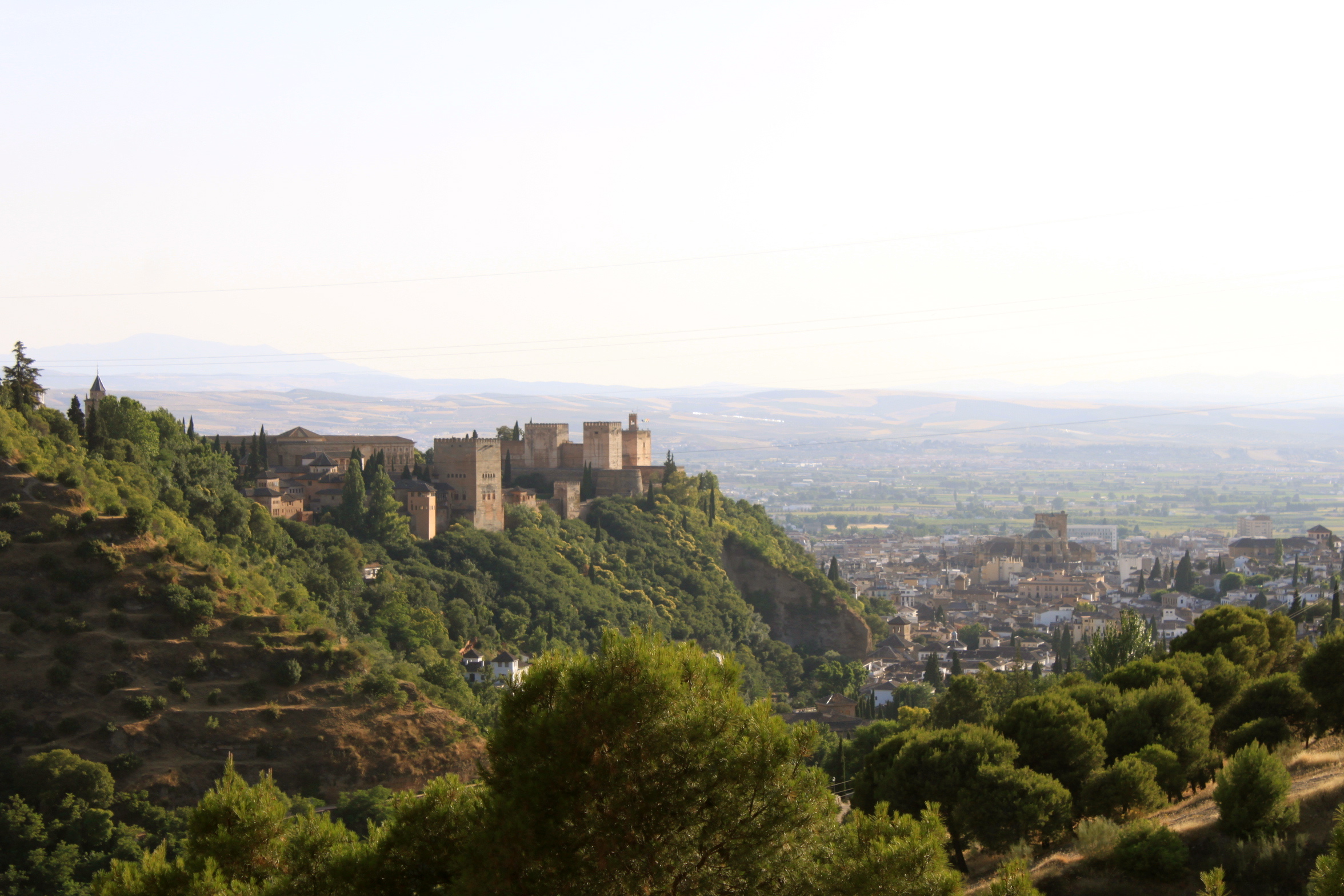 The following day we had a marginally successful attempt to experience the Alpujarras (foothills of the Sierra Nevada) in one day. After finally locating the bus stop after an unsuccessful morning run recon and some aimless wandering up and down the same 100-meter stretch together, we took a public bus to Monachi l-- what a beautiful sight.

Since it was a Saturday, which meant a limited bus schedule, we decided not to risk missing the last bus back to Granada. We walked around the foothills surrounding Monachil for a few hours and then headed back to the Granada. Upon returning to Granada, we toured the Generalife, which we had missed the day before. We then took a city minibus up a seemingly vertical road to the Abadia de Sacromonte monastery, which was notable for its extensive use of the Star of David in its ornamentation.

We then walked downhill to the Venta El Gallo Flamenco school, where we saw a flamenco performance of a totally different character than the ones we had seen previously. The dancers were much younger than in the other shows we had seen but less polished. Both Clay and I agreed that the crowd was obnoxious with their flash photography.

Since the Sacromonte minibuses weren't running after the show, we walked down the mountain to the city center. And I ended up having shwarma before leaving for Ronda the next morning.