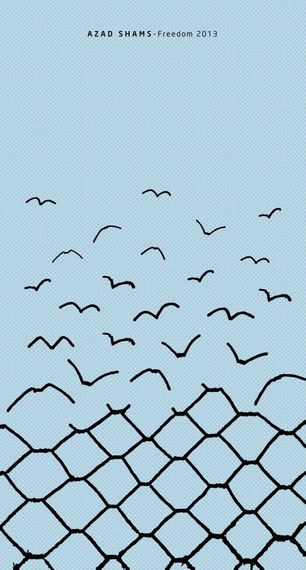 Two Palestinians, Heba and I, coming from the biggest prison in the world, Gaza, went to watch one of the few movies about Palestinians in Israeli prisons during filmfest DC this Saturday. Equipped with no expectations, we started watching "3000 Nights" - a movie by Mai Masri about "Layal,"(whose name means "Nights" in Arabic).

Layal is a Palestinian woman incarcerated at a high-security Israeli prison for picking up a young accused Palestinian while he was hitchhiking. "Layal" is a woman like you and me, a teacher loved by her students, with dreams and hopes. I felt "Layal's" journey of confusion, of battling to have a fair trial, of being denied, her frustrations, her shock and struggles to make the right decision.

My heart was appalled with every agonized scream from "Layal", while kicking the unmovable walls of her cell of solitary confinement. Palestinians were punished for troubles started by the Israeli criminals who continued to receive preferential treatment. Palestinian prisoners, through the movie, were the ones forced to cook for the guards and prisoners, clean the dishes and sew the army military suits.

Among these blank walls, one can easily lose their humanity but that wasn't the case for "Layal." She saved an Israeli female prisoner who was moaning in pain due to a drug overdose - an action that would have shocked all media which tries very hard to prove how monstrous Palestinians are. It is due to such bonds of solidarity with the Palestinian prisoners that Israeli authorities decided to separate Palestinian and Israeli prisoners in later years, as shared by Mai Masri.

The movie touched upon the conditions of pregnant prisoners and their struggles when giving birth inside prison. Palestinian women are chained to bed when giving birth while surrounded by Israeli soldiers holding their guns. The children were used as a psychological blackmail tool to stop hunger strikes among prisoners as well. Strikes that started to demand rights that some consider trivial, such as the right to have books, papers, newspapers and pens. Rights to make you feel like a human who is still alive. It made me wonder how we, in Gaza, could survive if we didn't have social media connecting us to the outside world.

Babies are life in itself and "Layal's" baby gave me and everyone in the cell a reason to celebrate, to count days so they can say happy birthday, and to contemplate what life will look like when freedom is attained. In those moments, the prison with its suffocating walls was not dictating how these prisoners should live or, shall I say, suffer. In those moments, the song "Darkness of Prison" sang by the prisoners echoed beyond the walls, the wired fences and the guards with their guns. It was extremely heartbreaking for me to hear their tranquil voices calling the darkness of the prison to unfold, singing their lack of fear of the darkness, promising the prison that after the night's darkness, a dawn of an ascending glory would shine.

I have always been fascinated with birds' ability to spread their wings and fly; a symbol of freedom. For someone locked in a cell, birds were the main thing prisoners would draw, talk about or carve as if to remind themselves that they are alive. Ahmed Alfaleet, a Palestinian prisoner in Israel sentenced for life, shared through his talk at TEDxShujaiya how a bird with a broken wing was life for the prisoners sharing his cell and himself included. Running to rescue this injured bird, giving it the little food they had, taking turns to care for it made him feel alive; not a breathing human being, but a living one as well. Losing the bird was the hardest thing Ahmed had been through. He shared how he didn't bother stifling his sobs, for every prisoner wept and mourned the loss of hope and life with the bird loss.

The movie ended showcasing how the number of Palestinian prisoners since 1948 exceeded 700,000. Men, elderly, female and children prisoners living under horrendous conditions that are getting worse with the passage of the time; left to die and be forgotten. Palestinian prisoners locked in Israeli prisons and those sieged in Gaza will continue to be forgotten; drawing freedom birds, singing for freedom and convincing themselves that they will taste freedom one day, some day!