When the FaceTime screen lit up Hannah and Kaia were jostling Hannah's mother Peggy out of the picture, shoulders touching in that fierce intimacy of girls who have been friends since the womb, as they like to say. At 11-years-old, these San Rafael girls have cemented their friendship in more intense ways than most girls their age. On October 21, 2015, Kaia Tanaka leaned over a candle on her bedroom vanity and her shirt caught fire, severely burning her back, and under her arm. Three surgeries, as many stays in the hospital and three months out of school later, Kaia is an electric bundle of energy, matched only by her best friend Hannah Butler. When Kaia had the surgery for skin grafts, she had to shave her head, so the doctors could take skin from her scalp for her back. And, if that wasn't enough, she donated her hair to Wigs for Kids. In solidarity, Hannah cut off her long hair, too. The two girls on my phone screen are perfect, mischievous pixie incarnations. 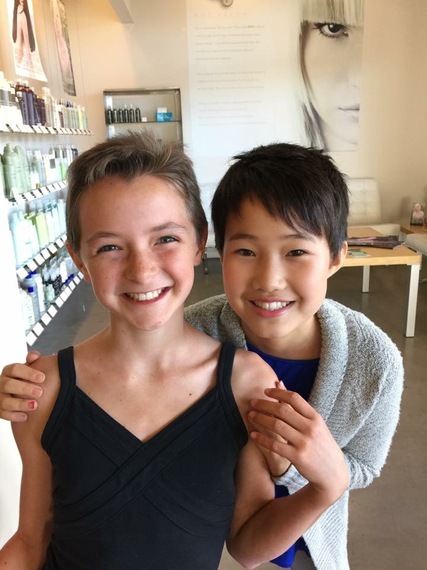 Without missing a beat, the girls are getting ready for a 5k race on May 22, part of the Run Like a Girl race series in California (no relation to my book, except in spirit, of course!). They did the 1-mile version of the race together last year, even though Kaia says she's not a runner and was only inspired to do it by her friend. They told me they like the fact that there are no boys in the race, "Not to be stereotypical," they say, finishing each other's sentences, "But boys are very, very competitive. Boys look more like they're going to die when they run." They said a few more things about boys, until I heard Peggy's voice off-screen, "Don't be so hard on boys." I felt guilty for having encouraged their riff, marveling, as I was, at their precocious poise.
Despite their comments about the boys' competitiveness, Hannah came in first in the race last year. And though Kaia says, "I'm not competitive, I just want to run and have fun." She did come in second last year. But for Kaia that's proof of how motivating her friend and the race environment are, "I feel like the race inspires girls, like me, who don't often run to get out and do it, because it doesn't have to be about a big competition." 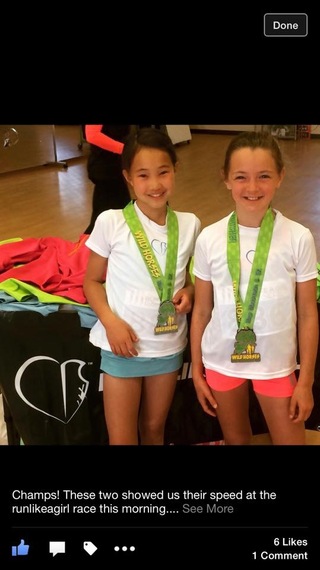 Of course, this year the race has taken on a new dimension. Kaia says, "It feels like more of a big deal. By knowing that I'm going to race, it seems like my recovery happened a lot more quickly. I don't care where I come in. I just want to do it."
No surprise with girls like that around, it turns out that running like a girl is contagious. Peggy has returned to running after a long hiatus, inspired by the girls and her older daughter and son. Though she has to endure the girls making fun of the running shoes she wears to manage her "plantar flashitis", as Hannah refers to her mother's injury. I can sympathize, as much as they've been through, Hannah and Kaia have no idea of the sacrifices we have to make to keep running like girls, as we get older. I'm speaking, of course, of the fashion travesty of the Hoka running shoes, which I, too, have been reduced to wearing, as unconscionably ugly as they are. But oh so effective, and for that I will kiss the ground they run on, with my feet in them.
My Hoka-bruised fashion-vanity aside, like Peggy, I am inspired by these girls--their exuberance, their open embrace of the world and their ferocity; a reminder of what being a girl is, and why I aspire to run like a girl until ... well ... forever.