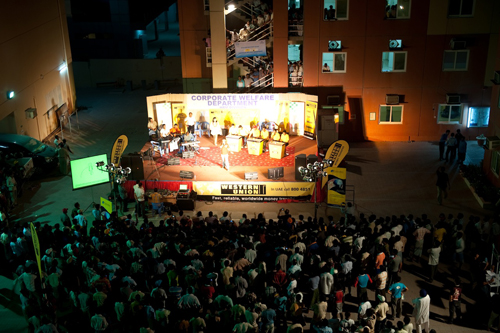 'Dubai Idol,' as the event is popularly known, gets a blurb in the local UAE papers around this time of year. The articles raise readers' eyebrows, cause grins and evoke a warmth, perhaps out of self-righteous pity, toward Dubai's most visible invisibles -- the South Asian men who build, clean and guard Dubai's buildings. The event's official name is Camp Ka Champ ('Champ of the Camp'), 'camp' here referring to the labor camps in dusty sections of sprawling Dubai. The champs (a duo) are chosen through several weeks of auditions and public performances. The jury is chaired by Shobana Chandramohan, a well-known former radio disc jockey and locally celebrated singer who often sings for large-scale events and weddings in Dubai's wealthier Indian communities. 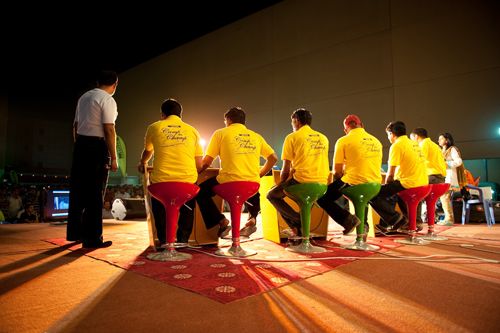 For a few sweltering weeks of a Dubai summer, Ms. Chandramohan and her jury pare down the number of men who have a chance at breaking from the crowd with which they are always associated, if for just a few evenings. While the would-be champs are judged on their voices and stage presence, almost all of them can express stage-size quantities of emotion. If the news blurbs are emotive for the readers, the performances can be overwhelming for the audience. 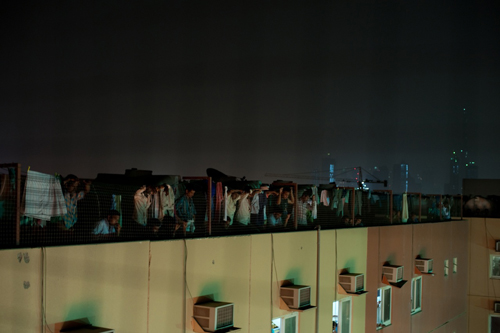 Lookers-on from the rooftop of a labor camp in Al Quoz. Burj Khalifa under construction in the background.

The story of the Gulf laborers (a term that describes a class of expatriate population who are unskilled, cheap and historically the most easily exploited in the Gulf region) is that they leave their destitute surroundings in India, Bangladesh, Pakistan or a hard-up community in any number of economically unstable countries to work in the booming Gulf. It's a tale that includes more nightmares than dreams-come-true, but in the larger picture involves millions of people living a bit better off, at least financially. 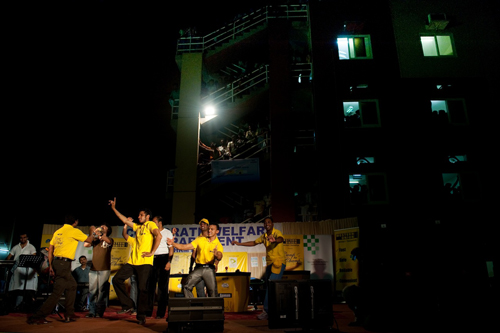 Competitors dance to the singing of one of the evening's special guests.

Camp Ka Champ's main sponsor -- and the one which gives the competition its electric-yellow hue -- is Western Union, the US-based company which provides worldwide services for international money transfers. No company knows more about how much these men are worth -- not only to Dubai, but also to corporate business and thousands of families abroad. In case the link between singing construction workers and money transfer was at all obscure, a 2007 report describes Western Union's motives for sponsoring the event: 'Target labour camp residents in a fun & meaningful way to encourage them to transfer money through Western Union.' 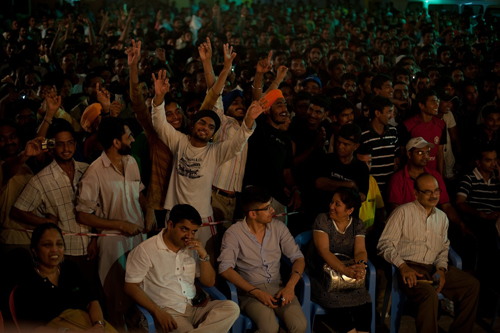 The crowd in Al Quoz.

It is indeed fun. For the audience, the men don the yellow hats and raise the yellow inflatable toys and sway to the songs. For the contestants, the event allows for rare release of energy, pent-up from restless days of wearisome work. For many of the competitors, Camp Ka Champ represents a chance to exist as an individual who can separate himself for one moment from his peers and command a stage. I spoke with the finalists who could speak English before they took the stage. They exhibited an unexpected calmness. Few had practiced beforehand (no time!). Most claimed they were doing this for their friends and family. And also just to have a good time. That creepy, desperate hankering for fame that settles over TV-scale competitions wasn't present in any of them. Maybe because they knew the results weren't going to place them somewhere else, but it seemed to me it was also about a kind of self-confidence, a trait that never is used to describe these men in the news. 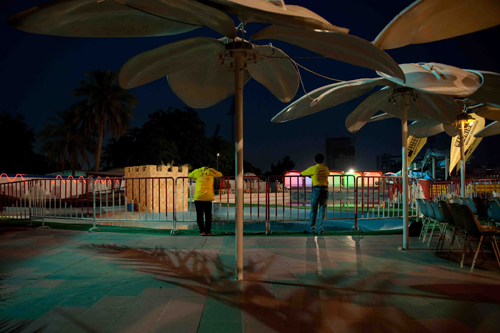 Two finalists look over LeisureLand's wave pool as they rest before taking the stage. 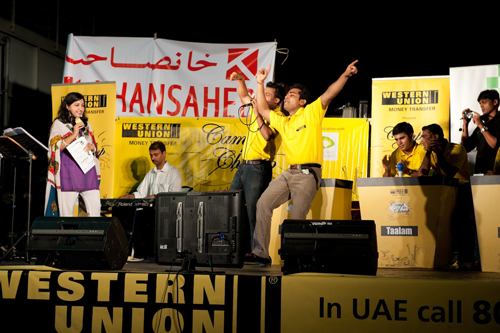 Jurist and event host Shobana Chandramohan stands to the side as two contestants sing their number during the semi-finals.

It is also amazing how well most of these men can sing. I attended some of the first-round auditions, when contestants were invited to sing a song of their choosing, usually a Bollywood number and almost always with an improvised keyboard back-up by a musician who seemed to know all the songs. No one was turned away. Ms. Chandramohan had a marathoner's endurance and gave each contestant her steely form of support. Like the American 'Gong Show,' the better the man could sing, the longer he was allowed to continue. Ms. Chandramohan often asked each contestant a question, usually about his favorite Bollywood film or actor. From there she would ask for another song. Everyone received a cheer. 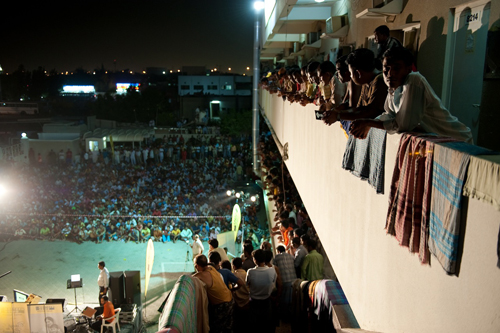 The stage and crowd in the Sonapur district of Dubai.

The semi-finals are perhaps the most captivating of the Camp Ka Champ events, as they take place in Dubai's labor camp neighborhoods of Al Quoz, Sonapur and Jebel Ali. For one night only, the dusty buildings are flooded with bright lights and yellow banners. Outdoor gangways of the surrounding buildings are populated with residents cooking dinner in the communal kitchens and catching glimpses of their friends and colleagues on the courtyard's temporary stage. 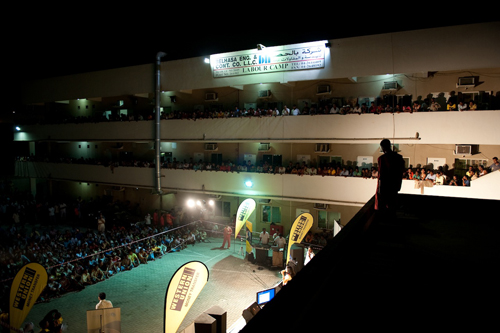 The stage and crowd in the Sonapur district of Dubai.

The finals this past year took place at one of Dubai's yesteryear locales, Al Nasr LeisureLand, far away from the labor camps and home to a wave pool and the Gulf's first ice rink. These men would otherwise never gain access to such a place. The finals are structured less like 'Idol' and more like 'Antakshari', the Indian quiz show where contestants have to answer questions about movies and music. The duo who hits the buzzer first gets to sing some lines as an answer to the question. Giant screens on either side of the stage run continuous Western Union commercials and pop questions for the audience, who can also win prizes by supplying the right answer with a text message (example: Do you need a bank account to send money with Western Union? a) No. b) Yes.) 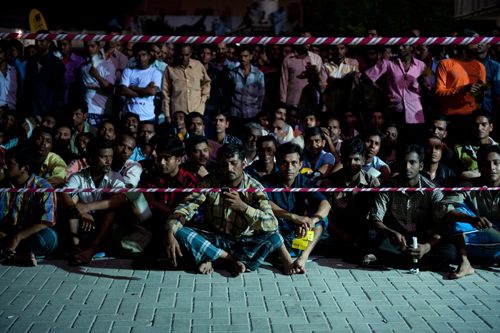 For the semifinals, plastic tape kept the crowd several meters away from from the stage.

Whereas the nights in Al Quoz had a terrific immediacy about them, the move to LeisureLand resulted in some awkward moments. Water and sodas in the 40 degree heat cost three times as much as in stores; invited guests (each finalist can invite twenty friends) arrived late because of bungled mini-bus arrangements; a local TV news correspondent easily got a camera moment with all the finalists -- hailing from Goa, Swat, Punjab, Tamil, Kerala, Bangladesh and elsewhere -- and asked them to sing for her cameraman "Jai Ho", the theme song from Slumdog Millionaire. Needless to say, no one knew the words, and the performance dwindled into a humming for Dubai viewers. 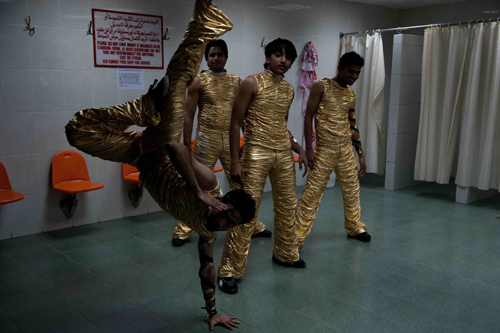 But the uncomfortable moments seemed to be lost on the excited crowd. More minor event sponsors -- a hair dye company, a skin-bleaching brand, a mobile phone provider -- tried to garner attention from a rare captured audience ready to grab free samples and coupons. Friends shared purchased drinks and food. While the VIPs sat up front separated from the rest of the audience by nothing less than red-and-white road barriers, the grounds behind the barriers became a terrific sweaty dance crowd. Chairs were hastily piled to the side, and men started dancing as if this were the best concert ever. The thermometer dropped just below 40 degrees at about 10 pm. Ms. Chandramohan and another local singer put on a show as well, but their performances were stiff, as if they were confused by singing to Western Union executives and Dubai's laborers. But the contestants were not inhibited by the cultural mismatch. Every musical answer shook the crowds into dancing. And then there was the dance troupe, which might have been called 'Michael Jackson's Day,' who could not have expected a more enthusiastic crowd for its poppy choreography and its gold-foil suits.

When it came time for the finalists to sing their songs, however, they inexplicably had to stay seated behind their quiz tables. That was the night's biggest disappointment because given the chance, these men would have rocked the house. One finalist used the occasion to sing Pakistan's national anthem. Camp Ka Champ finals happened to take place on Pakistani National Day.

Trivia scores were finally tallied and the text message votes were in. A duo was elected this year's Camp Ka Champ at around 11pm. The prize for each of the duo: a 1500 dirhams ($408) Western Union gift voucher, more than what many of these men make in a month, and a flat-screen television. After the winners claimed their prizes from the standoffish Western Union representative, the recorded music played on for a while. Eventually the dancing stopped, the four hundred or so guests started to leave LeisureLand, returning to the parking lot and patiently waiting for the mini-buses yet to arrive to take them back to the camps. For most of them, the next day was a work day.

(This is an extended version of a piece that first appeared in Al Manakh 2: Gulf Continued. 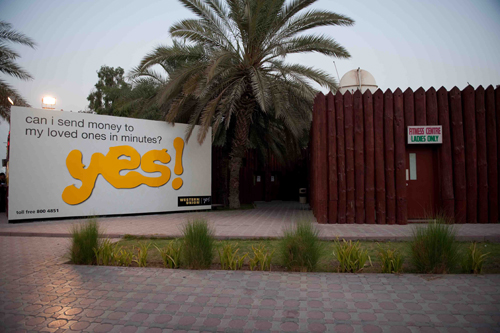