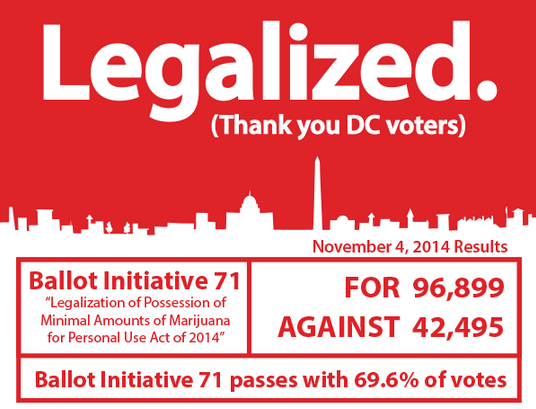 Last month, the District of Columbia voted overwhelmingly to legalize the possession and cultivation of marijuana for adults' personal use. It's been back in the headlines lately because of Rep. Andy Harris' rider on a must-pass spending bill prohibiting federal funds from being used to enact marijuana legalization in D.C. It's been signed into law but doubts remain as to whether it blocks the enactment of the ballot initiative, or just the planned D.C. Council bill to tax and regulate marijuana like alcohol. Whether or not it ends up being successful, this attempt to block the will of D.C. voters is outrageous, especially given that the ballot measure won by the largest margin of any legalization initiative yet, garnering 70 percent approval compared to runner-up Oregon's 56 percent.

How did the measure perform so well? Further, how did it flout conventional wisdom that ballot questions lose support in the last few weeks before an election, instead passing by a larger margin than any of the polls, which measured 63 percent approval in April and 65 percent in September? It's a complicated question, and while the D.C. Cannabis Campaign did an incredible job advocating for the measure, the huge victory was also due in part to a terribly unconvincing opposition.

Two Is Enough D.C., the official No campaign, was fraught with scandals and slip-ups: failing to register with the Office of Campaign Finance, misspelling bus advertisements and releasing a laughably awful video two days before the election in a Reefer Madness Hail Mary, to name a few. But beyond those mistakes, the opposition's failure to gain any traction can be attributed most to the absurd idea so central to the campaign that they made it their name: that "two is enough" when it comes to recreational drugs that are regulated rather than criminalized.

The argument goes something like this: alcohol and tobacco are already so harmful to society, why would we legalize another drug and make things even worse? Or as T.I.E. D.C. puts it:

"You've heard it often. 'Marijuana is no more dangerous than alcohol or tobacco and they are legal.' But think about that. In 2010, 25,692 persons died of alcohol-induced causes in the United States. Tobacco causes more than 480,000 deaths annually and is the #1 leading cause of preventable death in the US. Do we want the consequences of a third legal drug in our city?"

This may sound logical at first, but it quickly falls apart when put under any amount of scrutiny. The campaign's central message rested on the false assumption that legalization inevitably leads to more use and abuse, failed to recognize differences between the three drugs and refused to address that its arguments logically led to banning alcohol and tobacco.

Legalization Doesn't Inevitably Lead to More Abuse, or Even Use

Listening to T.I.E. D.C.'s rhetoric, one may believe that marijuana use is currently rare, and that legalization will inevitably lead to a huge spike in the drug's popularity. Of course, this couldn't be farther from the truth: about half of Americans admit to having used marijuana at least once, including 7.5 percent -- 20 million people -- who are regular consumers. Clearly, prohibition hasn't stopped cannabis from becoming widely used.

Given marijuana's popularity through decades of criminalization, it may come as no surprise that laws actually don't have a huge impact on drug consumption. Just as banning a drug doesn't make it disappear, legalizing marijuana won't necessarily lead to an explosion in its use. The Dutch, famous for their relaxed drug laws, use marijuana far less than other Europeans and only about half as much as Americans. It stands to reason that culture plays a much larger part in drug trends than policy.

While banning a drug won't make it disappear and legalizing won't make it popular, there are some things governments can do to decrease drug abuse. Honest public education grounded in science rather than fear-mongering, such as the Truth Campaign, can be very successful. We've brought teen tobacco and alcohol use to a 30-year low thanks to sensible regulation and evidence-based education, rather than prohibiting these drugs and arresting smokers and drinkers. Meanwhile, youth marijuana use is at a 30-year high. Considering the triumph of education and ineffectiveness of prohibition, one could be excused for thinking "two is enough" was a slogan created by those seeking to keep teens on drugs, not a group who wants to steer them away.

Asking "do we want the consequences of a third legal drug in our city?" implies that the third drug is comparable to the first two, but marijuana is significantly less harmful than alcohol and tobacco. Some of the biggest concerns about drugs are overdose, addiction, DUI, and violence; in each of these categories, marijuana is safer than its currently-legal counterparts.

Alcohol overdose, also known as alcohol poisoning, kills hundreds of Americans per year. In contrast, it's impossible to overdose on marijuana. Unfortunately the myth of marijuana overdose persists among ignorant prohibitionists, with Annapolis, Maryland's police chief even testifying before the state legislature that there have been dozens of marijuana overdoses in Colorado since legalization (his only source was a parody article identifying one overdose victim as former meth dealer Jesse Pinkman, a main character in Breaking Bad).

While there is still some debate over marijuana's addictive potential, scientific studies have consistently shown it to be less habit-forming than alcohol or nicotine. As shown in the chart below, marijuana causes minimal levels of dependence and tolerance in comparison to those two legal drugs. It also does not cause physical withdrawal symptoms, which are what makes it difficult to quit smoking and potentially deadly for heavy drinkers to quit without medical supervision.

Each year, drunk driving kills over 10,000 Americans and injures 290,000 more. This is a tragic consequence of alcohol misuse, and has caused prohibitionists to stoke public fears of "drugged driving" if marijuana is legalized. Yet this hasn't been a big problem in Colorado, and the most heavily publicized marijuana-related crash turned out to be the fault of a driver with a blood alcohol concentration of 0.268, more than three times over the legal limit of 0.08. Marijuana increases the risk of a crash about as much as texting while driving, nowhere near the risk of driving drunk. We don't completely ban alcohol or cell phones because of DUI or distracted driving, and there's no reason to continuing doing so for marijuana.

Two Is Enough D.C. also attempted to tie marijuana legalization to domestic abuse, with a speaker at their launch event citing the "thousands" of alcohol-related violence cases he saw in his career as a judge and pointing to the Ray Rice scandal as evidence of the harms of legal drugs. This fear-mongering had no science to back it up -- in fact, a month earlier, a study from the University at Buffalo School of Public Health found that married couples who use marijuana are less likely to engage in domestic violence than those who do not.

As explained above, legalization won't necessarily lead to big increases in marijuana use. But considering its relative safety in terms of overdose, addiction, DUI, and violence, it may be the case that more people using marijuana could actually improve public health. This rests on marijuana being used in place of more harmful drugs, rather than simply in addition to them, but the preliminary science bears this out. A study published in the Harm Reduction Journal found 40 percent of surveyed marijuana consumers used it as a substitution for alcohol. Another paper in the Journal of Policy Analysis and Management found that marijuana legalization led to a reduction in heavy drinking among 18- to 25-year olds.

If "Two Is Enough," Isn't One or Zero Even Better?

It's doubtful that legalizing marijuana will lead to a boom in use, and cannabis is clearly much less harmful than its legal counterparts. But even if all of T.I.E. D.C.'s unsubstantiated fears were true, there remains one simple question: if marijuana should be illegal, shouldn't alcohol and tobacco be banned too?

After all, the opposition's website features as many attacks on these two drugs as it does on the one it was campaigning to keep illegal. If we accept all of their arguments -- that banning a drug will significantly reduce its use, that making large swaths of the population into criminals won't degrade respect for the law, that the billions spent on police and prisons isn't better spent on treatment -- it's only obvious that we should ban alcohol and tobacco like marijuana.

In a debate in Oregon, lead prohibitionist Kevin Sabet, who also campaigned heavily against Initiative 71, compared the desire to regulate marijuana like alcohol to saying, "Our tail light is broken so we should smash in our headlight so we are consistent." It stands to reason that he thinks we should "fix the tail light" by banning alcohol.

But whenever challenged directly, those campaigning against marijuana legalization always dodge the question or make some illogical justification. During a lengthy conversation on Twitter, the Drug Free America Foundation repeatedly refused to answer the question. When arguing that Colorado shouldn't treat marijuana like alcohol, Sabet said, "Alcohol, unlike marijuana, has a very long, widespread history" and that "we're stuck with alcohol whether we like it or not." As cannabis has been consumed for thousands of years, used at least once by half the country, and only become more popular throughout the War on Drugs, it's impossible to understand how we're not stuck with it too.

However, it's very easy to understand why marijuana prohibitionists don't want the public to honestly compare it with alcohol and tobacco: because the vast majority realize that even though those drugs come with huge costs, banning them isn't the answer. As we've seen during alcohol Prohibition and the modern Drug War, banning these drugs causes many more problems than it solves. Once people consider marijuana laws through the lens of tobacco and alcohol policy, it's obvious that when it comes to drugs that are regulated instead of criminalized, two is not enough.