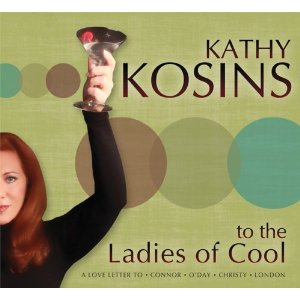 Each week there seems to be at least one CD in my mailbox that features yet another female jazz singer. Some have stellar back-up bands or top quality arrangers. Few leave lasting impressions
Here are two that do.

Singer Kathy Kosins, a name previously unfamiliar to me, has released an album of songs culled from what is often referred to as the "cool" school of jazz. Chris Connor, Anita O'Day and June Christy, were all at one time lead singers in the Kenton band during its heyday, eventually breaking into reasonably successful solo careers of their own. The fourth singer, the beautiful Julie London, was a WWII pin-up, an actress and torch singer whose most famous song "Cry Me A River" featured her signature smoky, sensual voice. Kosins and her musical director/pianist Tamir Hendelman unearth some rarely heard gems from their repertoire.

It didn't take long for me to become a convert to the fittingly laid-back delivery and chilled sense of time that Kosins so adeptly captures here on her latest release To the Ladies of Cool. She not only toasts the hipness of these wonderful ladies of song, she authentically recreates a lost genre of female jazz singing. Recalling a time where serious artists could enjoy being both pop stars and respected jazz musicians.

Kosins, like the women she pays homage to, possesses a warm, sensuous voice with an easy sense of time. Her words flow as effortlessly as maple syrup over hot pancakes. Her choice of material is surprisingly fresh. With "Learnin'the Blues," a tune attributed as much to Frank Sinatra as to Julie London, Kosins shows a deft sense of time and an inherent sense of swing. A smoking piano solo by the under appreciated Hendelman adds icing to this delicious cake. If this one doesn't immediately convert you to a Kosins fan nothing will.

"Night Bird," a song written by saxophonist Al Cohn and sung by the unheralded Connor, features Kosins' voice floating the lyrics of the song over Hendelman's ostinato piano line. The words drift along like wispy clouds over a blue horizon. A melodic tenor solo by Steve Wilkerson follows Gilbert Castellanos warm toned flugelhorn solo. A beautifully haunting version of Connor's "Don't Wait Up for Me" begins with a muted trumpet solo by Castellanos. Kosins' burnished voice drips with pathos and Hendleman's emotional piano solo is equally moving. Castellanos's trumpet is reminiscent of Uan Rasey's classic work on the theme to Chinatown. Kosins completes her Chris Connor set with the upbeat "All I Need is You," originally recorded on Connor's Atlantic album from 1956 A Jazz Date with Chris Connor Kosins' voice is warmer, less smoky than the Connor original. Her voice more fine cognac to Connor's single malt Scotch.

Henry Mancini's perky "Free and Easy" has an airy, lighthearted feel to it, accentuated by a lilting guitar solo by Graham Dechter.

Kosins easily adapts her voice to the feeling of the songs. Witness her treatment of Johnny Mandel's "Hershey's Kisses," originally done wordlessly by Anita O'Day, where Kosins briefly scats in a playful banter with saxophonist Wilkerson.

"Lullaby in Rhythm" comes from the June Christy playbook and Kosins freely scats to the swinging sway of this melody. Guitarist Dechter offers a solo in the spirit of guitarist Mundell Lowe.

Perhaps my favorite ballad of the album is the seldom heard "November Twilight," a nod to Julie London. Kosins just kills it in this most sensuous of renderings. Hendelman's piano and arrangement are evocative of a film noir soundtrack. Pretty arco work by bassist Kevin Axt ends this pouting piece.

The flittering "Kissing Bug" allows Kosins a chance to reveal that she has a greater range then she usually employs. She easily inflects her voice evoking the necessary emotion that these songs embody. Her controlled delivery is always pitch perfect.

The closing piece "Where Are You" has a slight Brazilian feel. Kosins' deliberate voicing is distinctively cool in phrasing and tone. In some kind of trip back in time you can envision her singing to a group of hipsters grooving on a Malibu beach at dusk.

Kosins' To the Ladies of Cool is one of those rare recordings that creates a new reality. In looking back, Kosins offers something contemporary that may be even better than the memory of the original.

Uruguayan born singer/composer Sabrina Lastman possesses an exceptional voice and a fearless sense of daring. The combination is a compelling amalgam that is showcased on her latest release The Candombe Jazz Sessions. Candombe is a genre of music that has its roots in the African Bantu tradition and is widely practiced in Uruguay. Candombe dance is arguably one of the precursors to the Argentinean Tango. 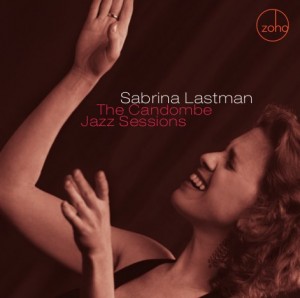 The infectious Candombe inspired "Axis" opens this album with Lastman exercising her formidable voice as instrument in an awesome display of vocal acrobatics. Meg Okura incorporates a robust, slightly Middle Eastern sound to the mix, her violin, blurring the origins of the music, as the two women skillfully trace each other's notes on voice and violin.

"Circular" is another Lastman composition, this one sung in Portuguese, that begins as a serene lament with some colorful percussion provided by drummer David Silliman. It soon transforms into a more upbeat piece with a stirring solos by the talented Emilio Solla on piano and a sensitive arco solo by Pablo Aslan on double bass. Lastman's soprano is pitch perfect throughout despite the rapid-fire twists and turns she puts it through.

The beautiful "Color De Arena" (Color of Sand) uses a poem by Uruguayan poet Washington Benavides for its lyrics and even though I don't speak Spanish the sentiment is never lost. The song features a string section that includes Okura and Ernesto Villalobos on violins and Dave Eggar on cello. This sensitive ballad becomes a vehicle for Lastman to show what a truly beautiful and emotive singer she can be.

The perky "Tengo Un Candombe Par Gardel" features the traditional three sized drums or Tamboriles of the Candombe played by Arturo Prendez, Manuel Silva and Fabricio Teodoro. Lastman weaves her magic in an unending display of her vocal prowess including some effective overdubbing of her own voice.

"Brisca Fresca" (Cool Breeze) is another Lastman composition, sung in Spanish and vocalese where she creates sounds that she uses to tell her musical story in a playful duet with drummer Silliman.

"Aqua E Vinho" (Water and Wine) is a composition by Brazilian composer Egberto Gismonti that Lastman sings so compellingly in Portuguese. Accompanied sparingly by Solla's sensitive piano and featuring Aslan's emotionally charged arco bass, this one is simply gorgeous.

Lastman is an accomplished composer with most of the songs on the album her originals. "A Los Legos" is a case in point. Lastman spent some time in Israel studying at the Jerusalem Academy of Music and Dance before moving to New York where she now lives. The Middle Eastern influences she absorbed there are evident on this track. Some nice interplay with Lastman and trumpeter Alexander Norris is especially tasty, as is Norris's searing solo as the tune turns into a contemporary jazz piece for a spell.

"Zea Mais" is a folk inspired composition that finds Lastman once again singing in harmony with her own overdubbed voice. This world music-sounding piece features a recorder solo by Daphna Mor.

The album ends with Lastman's warm "Deep Inside" and her acappella singing of a poem by Alfonso Romano de Sant'Anna "Cilada Verbal."