Two Honduran teens living in a Tijuana migrant shelter were allegedly stabbed and strangled to death, while traveling between shelters, according to the Honduran foreign ministry. And advocates worry this kind of tragedy may become more common if U.S. Customs and Border Protection (CBP) officers and Mexican authorities continue to reject children immigrating without parents or guardians.

“The death of these two kids shows how incredibly vulnerable and unsafe and unprotected these children are,” said Lisa Frydman, the director of regional and policy initiatives for Kids In Need of Defense (KIND). “Children are being forced to fend for themselves.”

According to the Guardian, child protection groups in Tijuana say there are hundreds of minors traveling alone in the city, though that number is hard to confirm since these children are often scared to identify themselves.

Frydman is part of a group of U.S.-based immigration experts who visited Tijuana last week, where the migrant caravan has stopped. She spoke with unaccompanied minors who are languishing in unsanitary tents and shelters where they can easily get sick or be exploited by traffickers. Other children have embarked on perilous journeys involving smugglers after border agents and Mexican officials have refused to give them access to legal ports of entry.

“I worry about children getting sick...exploited and victimized,” said Alan Shapiro, chief medical director at Terra Firma, a program that treats immigrant children. He recently visited children who had cases of the cold and flu in shelters near the border.

He said the seven-year-old Guatemalan girl who died in U.S. custody last week should have been a “wake-up call” to immigration officials that children deserve better treatment: “God forbid we see another child die because our humanitarian response is really not what it should be.”

A government crackdown on asylum-seekers is prompting immigration officials to turn away children who make the journey to the U.S. without legal guardians, according to lawyers; in many cases, the children want to reunite with parents or family members already living in America.

There are currently more than 6,000 migrants in Tijuana waiting to enter the U.S., yet border patrol officials are only interviewing between 30-90 people a day―a process known as “metering” that is part of a larger government strategy to deter immigration. As a result, shelters are overcrowded―an outdoor tent camp that was at least three times above its capacity recently shut down. Meanwhile, migrants are waiting up to two months to approach the border, after putting their names on a list controlled by other migrants and, unofficially, Mexican immigration authorities. This situation is particularly dangerous for children who are by themselves.

A group of immigrant child advocates who recently traveled to Tijuana said they spoke with roughly five children who were turned away from the border by U.S. and Mexican officials.

Children are being forced to fend for themselves. Lisa Frydman, the director of regional and policy initiatives for Kids In Need of Defense

Last week, Frydman spoke with 14- and 16-year-old Mexican siblings who said that after telling CBP officers they feared for their lives, they spent 18 hours in a holding cell in the U.S. before Mexican officials took them back over the border. (A CBP spokesperson told HuffPost that the U.S. Citizenship and Immigration Services is the department that initially decides whether or not a migrant can pursue asylum, not CBP.)

Two teenage brothers from Honduras told Shapiro that after speaking with CBP officers at the San Ysidro port of entry, Mexican immigration officials escorted them back to a shelter.

And Maria Odom, the vice president for legal services at KIND, spoke with three unaccompanied teenagers from Honduras who were turned away from the Otay Mesa port of entry on Dec. 5, despite being with lawyers.

The advocates say that Mexican immigration officials stationed near ports of entry are also telling unaccompanied minors that they can’t enter the U.S. or join the list of asylum-seekers waiting to cross the border. Instead, advocates say, officials claim the children should be in the custody of Mexican child protective services.

“No one is being denied the opportunity to make a claim of credible fear or seek asylum. CBP officers allow more people into our facilities for processing once space becomes available or other factors allow for additional parties to arrive,” a CBP spokesperson said in an email to HuffPost, adding the agency gives priority to those with medical emergencies, the elderly and children.

If they can’t enter the U.S., many unaccompanied children stay in outdoor camps or shelters, which Shapiro say is dangerous for their health. He is particularly worried about a makeshift shelter near the border, which the pediatrician describes as at least three hundred tents crammed together “cheek by jowl” close to mounds of garbage, in an area that lacks clean water and medical services.

He met one father living there whose toddler had a seizure, yet when the man called an ambulance it never arrived. Shapiro says the toddler was also eating powdered formula directly from the package, likely because no clean water was available.

According to Shapiro, the tents are on a street near a sports complex where the caravan of almost 6,000 migrants had been staying until Mexican officials shut it down in early December “due to health issues,” including open sewage drainage. When it rained in November the camp flooded.

But Frydman says some unaccompanied minors have chosen to remain in tents rather than relocate to safer shelters, where they fear they could end up in the custody of child protective services and be forced to go back home.

Even in shelters with better medical services, Shapiro spoke to children suffering from colds, fevers and swollen glands. He worries that in any open environment, infectious disease could easily spread, which could be especially dangerous for young kids.

Some unaccompanied children resort to more dangerous ways of crossing the border after immigration officials reject them from ports of entry. Frydman spoke with a teenage boy from Honduras who planned to return home and a find a smuggler who could bring him to the U.S.

She said it’s a tragedy that though the boy had safely made the journey to Tijuana, he felt his only way of crossing the border was to “turn around and put himself in grave danger.”

Crossing the border illegally can involve days of walking through the desert, which can make children sick and dehydrated, crossing a river, which puts them at risk of drowning, or riding in the back of a smuggler’s vehicle, where they could suffocate.

They can also end up in the hands of traffickers who disguise themselves as border smugglers.

How many more children have to die before our immigration detention system and our humanitarian response changes to protect children? Alan Shapiro, chief medical director at Terra Firma

Michelle Brané, the director of the migrant rights and justice program at the Women’s Refugee Commission, interviewed a 16-year-old boy from Central America whose eight-year-old brother had disappeared with a group of smugglers.

“It’s an eight-year-old kid that went off to cross [the border] somehow,” she said. “We don’t know how [and] we don’t know who he went with.”

Shapiro is concerned that unaccompanied children who are desperate to cross the U.S. border will be exploited by criminals, especially in a city where gang violence is rampant and homicide rates have reached record highs.

“I would be really worried about victimization and sexual abuse and trafficking,” he said. “The lack of the U.S. [government’s] willingness to process these children is pushing [them] into very dangerous situations.”

Experts say the U.S. government needs to start treating unaccompanied children more like humans than criminals, and that kids who express a fear of returning back home should never be turned away.

“How many more children have to die before our immigration detention system and our humanitarian response changes to protect children?” Shapiro said. “Because right now I don’t see that.” 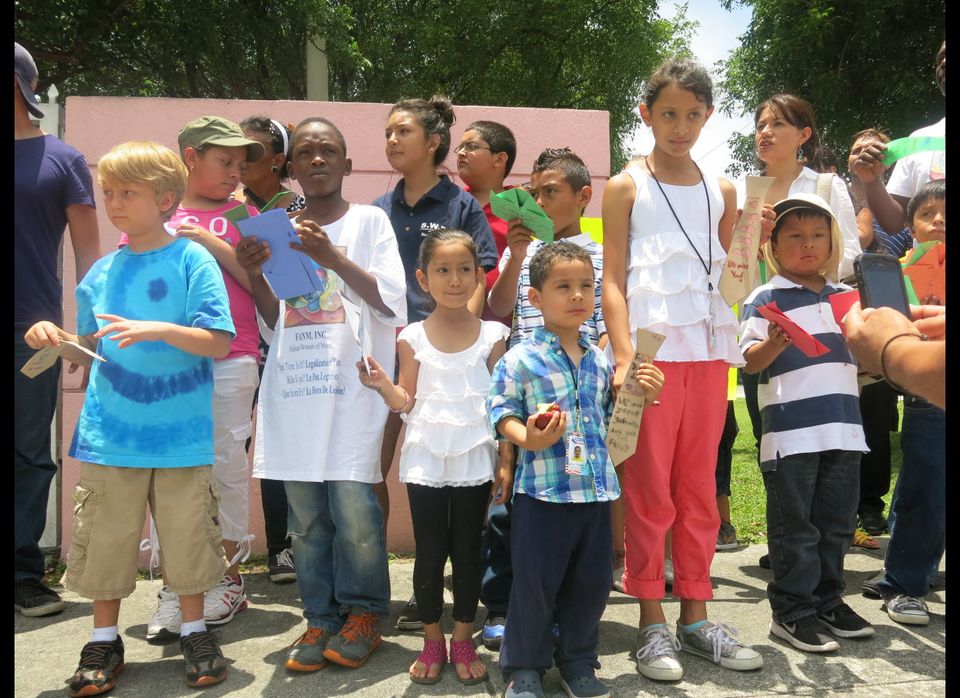