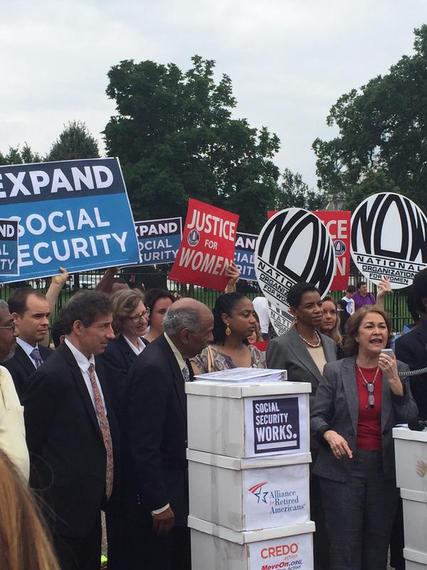 Yesterday I stood in front of the White House along with Reps. John Conyers (D-MI) and Donna Edwards (D-MD), leaders of the Economic Policy Institute, MoveOn, Democracy for America and other allies to deliver a petition signed by over 2 million Americans in support of expanding Social Security.

The petition drive was co-sponsored by more than two dozen organizations representing tens of millions of Americans, and was timed to coincide with the once-a-decade White House Conference on Aging. The National Organization for Women (NOW) is part of this coalition, and I was proud to be among the speakers at the petition delivery.

Expanding Social Security is an essential building block in strengthening the income of everyday people in this country. Indeed, it is the foundation of that effort.

Hillary Clinton gave a speech yesterday in which she called income inequality the defining economic issue of our time. I agree. Her commitment to raising wages and requiring the wealthiest to pay their fair share of taxes is key to reducing income and wealth inequality. And expanding our Social Security system is right in line with her principles.

Anyone who is paying attention right now knows that our nation is facing a retirement crisis. The number of people with pensions has shrunk dramatically in the past three decades, and many people have still not rebuilt their personal savings since the devastating Great Recession, when house prices and the value 401(k) plans plummeted while unemployment soared.

Across the board, flat middle-class wages are making it extremely difficult for families to regain their economic footing. But in communities of color, economic insecurity has been deepened by racist policing that produces mass incarceration -- which cripples the wage-earning capacities of young men and women ensnared in the justice system -- while single mothers of color continue to be targeted by lenders for abusive subprime mortgage loans.

All of which spells particularly serious trouble for women's retirement security. The gender and gender/race wage gaps mean that women work a lifetime at unequal pay. Often overlooked is that, in addition, women often have higher expenses than their male counterparts because they have to come out of pocket for their own and their children's medical costs, as well as childcare and other aspects of family care giving.

No wonder so few women can rely on just their personal savings in retirement. Social Security is their lifeline, accounting for 90 percent or more of the monthly income of one in three female beneficiaries.

Yet, with an average benefit of just $13,500 per year for women, proposals to expand Social Security are more important than ever. A key expansion proposal is the caregiver credit, which would lessen the penalty women experience in the form of lower retirement benefits for having dropped out of the paid workforce to care for children or other family members. Other essential expansion proposals include a one time across-the-board benefit increase, raising the minimum benefit, and lifting the cap on wages subject to the payroll tax so everyone pays the same rate.

Although Social Security expansion may not have been on the agenda at the Conference on Aging, I know it must have been on the delegates' minds--and not just because we stood outside the White House to tell them so.

According to a 2014 survey by Lake Research Partners,

And in an op-ed last week in Time Magazine, about what the White House Conference on Aging wasn't planning on addressing, Reuters' Mark Miller wrote,

The discussion of Social Security looks like it will be especially disappointing. The policy brief embraces generalities about "strengthening Social Security" without mentioning the boldest, smartest idea being advanced by the left flank of the President's own party: expansion of benefits focused on low- and middle-class households. Finding ways to protect traditional pensions? Preserving Medicare as a defined benefit, and defending it against voucherization? Those are nowhere to be found.

For years, Washington politicians and policymakers been talking about cutting Social Security benefits. The Beltway consensus, unduly shaped by deficit hawks and Wall Streeters, has been that the system is broken and must be pared back, and progressives who support Social Security have often had to play defense.

But in late March, Sen. Elizabeth Warren, the populist Democrat from Massachusetts, entered the fray--and challenged the prevailing view. In the wee hours of March 27, Warren introduced an amendment to the Senate budget resolution calling for protecting the program's solvency and expanding Social Security benefits. And every Democrat present but two voted for the amendment; every Republican opposed it...

In a HuffPost blog earlier this year, I quoted Senator Bernie Sanders speaking, as always, truth to power:

Sometimes we all tend to take things for granted and we forget that Social Security is the most successful government program in our nation's history. Let's be clear. For more than 75 years, Social Security has, in good times and bad, paid out every nickel owed to every eligible American. Social Security has succeeded in keeping millions of senior citizens, widows and orphans and the disabled out of extreme poverty. Before Social Security was developed, about half of our seniors lived in poverty. Today, fewer than 10 percent live in poverty and all of that is done with minimum administrative costs.

What a contrast to the smug remark by Senator Rand Paul (R-KY), who said, "over half of the people on disability are either anxious or their back hurts -- join the club."

We need a national policy that respects workers' contribution to the economy and provides the benefits they've earned and deserve. What we don't need are right-wing politicians (particularly those running for president) who see people receiving Social Security, Medicare and disability benefits as malingerers whose economic security can be put on the chopping block.