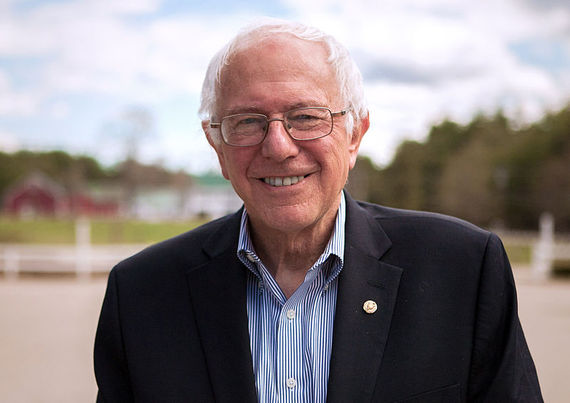 It's been two months and two days since Netroots Nation, where Black Lives Matter activists disrupted a town-hall meeting featuring Martin O'Malley and Bernie Sanders. Without rehashing the details, it was not Bernie's best moment.

Nevertheless, many argued that in the long run he would benefit from the confrontation, that it would make him a better candidate by pushing him to address racial injustice broadly and, more specifically, the disproportionate level of police abuse faced by African Americans. As for me, I said back then that Sen. Sanders as well as all the major Democratic candidates would ultimately thank Black Lives Matter for that push. So, how has Bernie done since Netroots Nation?

On the matter of substance--addressing the issues raised by Black Lives Matter--Bernie has gotten the message. It's not for me to say whether activists should proclaim themselves satisfied with him or any other candidate. The official Black Lives Matter organization has stated that it will not endorse any office seeker or any political party. Some have questioned that strategy, but, on the other hand, the activists may simply believe that their cause is better served by remaining neutral. Time will tell. Either way, there is no question that Sen. Sanders has responded.

After being asked at Netroots Nation to speak out on these issues and to "say her name," Bernie quickly did so. The very next day he said the name of Sandra Bland and condemned the "outrageous" treatment she suffered at the hands of the police. Going further, he tweeted that if Ms. Bland had been a middle-class white woman, she would not have been treated the same way, and in public remarks a few days later added, "If that was a white woman, nobody believes for a second that would have happened." One week after Netroots, Bernie offered a comprehensive discussion of race in an address to the Southern Christian Leadership Conference.

In addition to changing his campaign rhetoric, Sanders added to his website a comprehensive issue page devoted to "racial justice," a move that earned a positive response from leading Black Lives Matter activist DeRay Mckesson among others. Having also been called out for a lack of diversity among his top campaign staff, Bernie hired Symone Sanders (no relation), a "young, black, criminal justice advocate and supporter of the Black Lives Matter movement," as his national press secretary. Within two weeks of Netroots Nation, one headline (yes, it was BuzzFeed, but still) declared, "Bernie Sanders Discovers His Inner #BlackLivesMatter."

On September 14, Bernie spoke at Liberty University--a haven for evangelical conservatives--and delivered a strong message on racism in America, past and present:

"I would also say that as a nation, the truth is, that a nation which in many ways was created, and I'm sorry to have to say this, from way back on racist principles, that's a fact," Sanders said during a Q&A following his speech. "We have come a long way as a nation."

Sanders said the election of Barack Obama in 2008 was a great step forward for America, but the country's founding on "racist principles" and "institutional racism cries out for reform."

Just a few days ago, Bernie met with activists from Campaign Zero, the group that recently produced a set of policy proposals designed to create "a world where the police don't kill people by limiting police interventions, improving community interactions, and ensuring accountability." The reaction from the activists was largely positive, as they found much common ground and appreciated what participant Brittany Packnett called Sanders' "willingness to be pushed & consider new ideas." Mckesson, who also participated, added that the senator "had read the newly released Ferguson Commission Report & it was clear that it has informed his understanding of the issues."

On September 17, Sanders--in coordination with members of the Congressional Black Caucus and the Congressional Progressive Caucus--introduced a Senate bill that would ban private prisons, a practice he called "morally repugnant." He also called for us to reduce the number of Americans we incarcerate, saying, "It is a national tragedy that a disproportionate number of those who are in jail are black and Hispanic." Ours is the highest incarceration rate in the world as of 2012.

If the Black Lives Matter protests at Netroots Nation succeeded in getting Bernie Sanders to change, the next question is whether those changes have produced results for the candidate's electoral prospects. On that front, the answer is less clear, but signs are pointing in the right direction, nonetheless.

The first image above is where the race for the Democratic nomination stood during Netroots Nation, according to Pollster.com at Huffpost. Just below it are the most recent available numbers.

Below is the broader trend line, with Hillary Clinton's numbers represented by the dark blue line, and Bernie Sanders' by the light blue line. The chart makes clear that Bernie's surge--which began in the late spring--has kept right on going over the past two months.

By the way, this week he's on the cover of Time, with a largely positive article on the pages within. Finally, the simple fact of Bernie's strength vis-a-vis Hillary Clinton is what's getting Joe Biden to so seriously consider joining the race. Does anyone think that if the numbers from June still held, if Hillary was still sitting in the high 50s--almost 40 points ahead of Bernie--that the vice president would think he even has a chance to win? Hillary's email related problems aside, there's no Biden without Bernie.

Looking beyond the broader numbers, Sanders has thus far failed to make significant inroads with black and Hispanic voters. To put that into perspective, Gallup found that 22 percent of self-identified Democrats are black, and 13 percent are Hispanic. As Hillary Clinton herself learned in 2008, winning a majority of white voters--as well as a two to one majority of Hispanic voters for that matter--will not get you the Democratic nomination if African Americans almost unanimously go with another candidate.

One thing Bernie can point to is that, according to Gallup polling done last month, two-thirds of black voters still don't know who he is. Among those who do, 70 percent have a favorable opinion of him. We can say that what happened at Netroots Nation did not turn African Americans against Bernie.

Going forward, one would think that winning Iowa and New Hampshire (and Sanders is leading the polls in both states as of mid-September) would encourage black Democrats to get to know him a bit more. At that point, however, it would be far too late for him to suddenly begin talking about racial injustice and the need for systemic change to counter institutional racism. But Bernie won't have to make such a sudden shift next February, because he's already done it. And for that he can thank Black Lives Matter and what happened at Netroots Nation.

Bernie Sanders' message certainly has the potential to resonate with black voters because it more resembles the spirit--if not the exact policy proposals--of Martin Luther King's 1967 book Where Do We Go From Here: Chaos or Community, as well as the King-organized Poor People's Campaign of 1968 than that of any major presidential candidate since Jesse Jackson. It's worth noting that Sanders endorsed Jackson for president in 1984 and 1988, and helped deliver his very white state of Vermont for the Reverend in the latter year's Democratic primary.

Although it's not 1967 or 1988 anymore, the central argument behind the aforementioned campaigns was that a push for racial justice and civil rights without a focus on economic issues remained incomplete. Sanders has shown since Netroots Nation that he understands that reality by addressing both areas where race and class intersect, as well as those where racial injustice inflicts harm irrespective of class. Doing so gives him a chance to win over black voters, something he had little chance of doing with his pre-Netroots Nation message.

Would Bernie have taken the steps he has taken since then without that disruption? I'd like to think so. But either way, those of us who said that Bernie would ultimately thank the Black Lives Matter activists for what happened at Netroots got it right. More importantly, those activists advanced a vitally important cause by ensuring that every serious national Democratic candidate going forward must substantively address it.