When you think of Southern California, what comes to mind? Constant sunshine, miles of beaches and cheap "New Age" spiritualism.

One city runs into the next, squeezing out the spaces that once promised, if not ensured, some sort of demarcation and differentiation. Which is why, amidst all this, one does not expect to find nature-based retreat centers that provide a respite from the energetic buzz of the highly sought after life in this temperate land.

There are two centers in San Diego's north county that I return to each time I go back to Southern California. Both were established in the early part of the last century (before the new age movement of western spirituality was fully established), are grounded in religious traditions, but offer brief or long-term retreat for both the secular as well as non-secular. They are oases of tranquility, where one can find solitude, practice meditation and contemplation, walk trails or simply sit surrounded by the sights, smells and sounds of non-human existences. 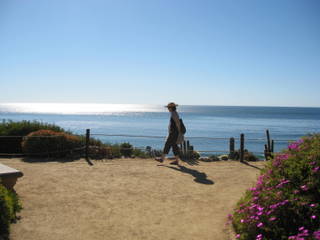 Located between the Pacific Ocean and the Coast Hwy 101 in Encinitas, the Self-Realization Fellowship (SRF) gardens are truly breath-taking and wholly unexpected amongst the trendiness of the beach strip. The four acre gardens are part of the larger 17 acre ashram center and retreat facility, founded in 1937 by Paramahansa Yogananda, a meditation teacher originally from India.

I admit that I have not stayed at the center, strikingly surrounded by three towers of lotus blossoms and poised on the edge of bluffs overlooking Swami's beach. I do, however, visit the gardens regularly and am always hushed by the sensation of stepping into a foreign land. Perhaps it was designed to be a replica of the tropical forests of Yogananda's native India. Walking the main path, one is shaded by a canopy of rubber trees. Lush ferns and swathes of green foliage, including Korean and Mondo grasses, carpet the ground. Impatients, Begonias, and Cyclamens are a few of the many flower varieties and the diversity of tree species includes Coral, Ming and Palms. Coming upon the Koi pond feels somehow magical and intimate, as contrasted to the vast expanse of the upper exposed gardens which frame the blue brilliance of the ocean horizon.

To me, the garden is a gem for anyone looking for a quick twenty minute splash of beauty and peacefulness or seeking benches perfectly situated for hour long meditations. It is open year round, Tuesday - Sunday, and is free to the public though donations are appreciated. For information on retreat activities, accommodations and directions to the gardens, click here. 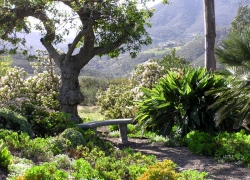 About 15 miles inland from Encinitas, Questhaven Retreat (QH) showcases distant views of the ocean from chaparral and oak covered hill tops. The grounds, encompassing 640 acres, are largely undeveloped with miles of trails that lead one to seasonal springs, groves of oak or olive trees, rock outcroppings, and ridge-line views. Founded in 1940 by Flower A. Newhouse, QH is a non-denominational Christian center that offers weekly services, four major retreats annually, accommodations for retreatants and daily public access to the grounds.

Up until about 15 years ago, the five or so miles to get to QH, once turning off the major road of Rancho Santa Fe in San Marcos, was abit like suddenly entering another time, stepping into the countryside, meandering on a narrow road that wound around the hill's natural curves while letting the senses feast on a landscape without buildings. This has now changed, with communities established nearly up to QH's boundary, making the suddenness of the open space all the more alluring. Driving through the large pink gates that announce ones arrival, the scent of the evergreen trees and the sense of stillness hit one almost immediately. The first building to be seen is the office, where trail maps, books by the founder, and retreat information is available. If walking the trails, it is important to be aware of the presence of both rattlesnakes and poison oak (especially in the summer). 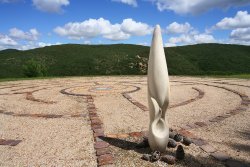 Even if one isn't a trail walker, wandering the developed grounds is no less peaceful. Buildings dot the landscape - from the shop that houses the old printing press, to the original chapel constructed with adobe bricks made from QH soil, to the Friendship House where the majority of social gatherings take place. The cottages accommodate single persons as well as larger groups. Depending upon the time of year, a variety of chaparral Southern CA bird species and a host of migratory varieties on the southern Pacific flyway can be heard and seen. If staying the night, be prepared for a stunning silence that is broken only by the occasional yipping of coyotes or the hoot of a local owl. You might want to arise early and watch the sun crest over the eastern horizon as you walk the meditation labyrinth, or climb the Inspiration Point trail to see the sun set into the distant horizon of the Pacific. Largely, QH is a myriad of tiny natural sanctuaries that make it a sort of refuge - a refuge from the fast-paced world that might suddenly feel miles and lifetimes away.