Sunday will see the biggest march against climate change in the planet's history. But as we parade through the streets of New York, it will look -- and sound -- different than the big mass gatherings of the past century, from the march on Washington to the huge nuclear freeze mobilization in Manhattan. Some things people are used to will be missing; others will be added. 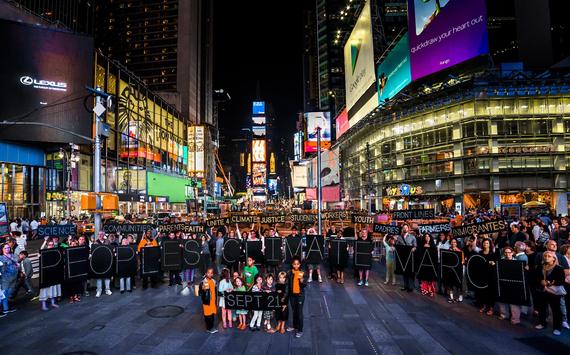 1) No speeches. There won't be a big rally at the finish of the march. Partly this is because of the New York police, who weren't willing to let us use Union Square or Herald Square or Washington Square, or any other such gathering place. Though I wasn't on the organizing committee, I know that those New York locals who led the effort -- folks like Eddie Bautista of the NYC-Environmental Justice Alliance, Elizabeth Yeampierre of UPROSE, Lenore Friedlaender of 32BJ SEIU, Tomás Garduño of ALIGN, and veteran protest organizer Leslie Cagan -- negotiated long and hard. Everyone could have decided, I suppose, to simply ignore the police and risk the consequences, but that would have meant an end to hopes for a family-friendly mass march. (Happily there will be civil disobedience Monday morning in lower Manhattan as activists dressed in blue "Flood Wall Street.") Instead, the lack of speechifying may actually be a real plus.

For one thing, most speeches aren't really all that good. Other than Dr. Martin Luther King's 1963 Dream speech, I'm hard-pressed to recall another true moment. As someone who might have been tapped to give a talk, let me say it would have amounted to: "Global warming is terrible, y'all are great, let's all get to work." I'll miss hearing Rev. Lennox Yearwood, whose gravel-voiced preacher's cadence has become the hallmark of this movement, but happily his Hip Hop Caucus has already produced a soundtrack for the march, a remarkable collection of environmental music that will be available for free beginning Thursday afternoon from iTunes.

And the lack of speeches -- though it will deprive us all of a big bonding moment -- underscores something crucial about this movement that we've been trying to get across for some time. It's close to a leaderless movement -- or, better, a leader-ful movement, one that turns a lack (we don't have a Dr. King) into an advantage. To take on the sprawling and protean fossil fuel industry, we need a sprawling and protean effort, one linked enough to act together on occasion, and one diverse enough that it can't be taken down with attacks on one or two great leaders. As Rebecca Solnit put it, "no shepherds, no sheep."

So don't worry too much that it's a day without booming rhetoric (there's plenty of talking going on the rest of the week for those who like to listen). The absence of speeches opens up more space for conversation -- for planning, on the buses headed home, for what comes next. That's the chatter that matters.

2) The second silence is more significant and more powerful. It will last two minutes, from 12:58 to 1:00 p.m., and it is in commemoration of those who are the first victims of the fossil fuel industry. Some of those will be on hand -- the march is being led by frontline communities and indigenous groups from around the continent and the world, people who've watched their lands and neighborhoods wrecked by tarsands mining or fracking wells or stinking refineries, or by superstorms and megadroughts. Far more of these frontline communities will be watching from afar, in the more than 2,000 solidarity demonstrations in 152 countries. For me, this will be the most powerful part of the day, a chance to reflect on all the people I've met in the 25 years since I started writing about this mess: the people dying of dengue in Bangladeshi clinics, or rallying in the Maldives to save their homes which sit a few feet above the seas; the people even this week dying in the flooded fields of Kashmir as record flooding wrecks their meager livelihood.

And not the people alone. Yes, this is the People's Climate March, but we rally as well for the rest of creation -- for the half of species on this planet that will blink out this century if we can't bring this scourge under control. It's not wrong to shed a quiet tear for the beauty of this sweet planet.

Nor for all those people we can barely imagine, who will have to live in a world we've degraded and impoverished. Climate change is one of the most destructive things human beings have ever done; this short silence is a moment to plumb the depths of sadness and despair that have brought us together. In the normal bustle of Manhattan this silence should haunt and echo.

3)And then it's going to end in a Great Big Noise -- we're all, at once, going to sound the great climate alarm. Look, for 25 years scientists have been explaining with careful precision the depth of our crisis. For 25 years economists and policy wonks have been explaining the various ways out of this crisis. And for 25 years they've been drowned out by the sound of money, a sound that has blocked the ears of our presidents and prime ministers and politburos.

It's time for us to make our own clamor. Not in the quiet tones used in the UN Security Council, but with everything we've got. Own a trumpet? Bring it. Own a vuvuzela? Definitely bring it. Whistles, drums, tin cans, vocal cords -- we're going to make a noise that will echo down over the eons. A noise so loud that no one anywhere can say they weren't warned. It's a smoke alarm for a world on fire, a burglar alarm for a world whose future is being stolen. It's the sound of frustration, anger -- and of resolve.

Because this day doesn't end anything. We can be strategically silent, but we will mostly be noisy. Having sounded the alarm, we're going to put out the fire; we're going to catch the burglar and lock him up.

This movement pivots on Sunday, and you're going to be a leader as we head forward. See you there!