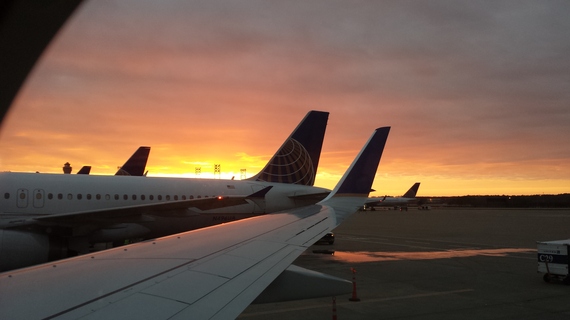 It was late afternoon in Portland, Oregon -- around 4 o'clock. For me, it was closer to 7 p.m., as I had been flying all day from the East Coast of the United States to the West Coast. I boarded the prop-driven commuter aircraft from the rear and took my seat by the window, hoping the flight would be peaceful and quick. I was tired. This was my third flight in a long day.

The aircraft was filling fast and it looked like it was going to be a cheek-by-jowl flight -- not an empty seat to be had. A large man plopped down in the seat next to me. He was unshaven and wearing a stained T-shirt that barely covered his big belly. He eagerly pawed his way through a shabby zippered case to remove a Tootsie Roll. Eating it with much smacking and noise, he tried to place the candy wrapper in the seat pocket in front of him. He missed. The wrapper dropped to the floor. He was too large and the seat was too small for him to do anything but let the paper stay where it had landed, hidden in the dark area somewhere near his feet.

I was not happy with my seat partner. I moved my body as close to the window as I could. I was judging this man and condemning him in my mind, finding all sorts of fault with him and feeling put upon that I had to sit next to him. When he asked for an "extender" for the seat belt to make it large enough to wrap around his girth, I practically shuddered with distaste.

The plane took off and we made eye contact. He looked at me through thick glasses with dark brown eyes and said, "Gee, you look familiar."

"I don't think we've met. I am coming in from Miami." I smiled at him as I spoke.

We continued with the usual benign pleasantries and fluff that seat-mates on airplanes share. Then he dropped the line, "I'm struggling to do life just one day at a time," and this caused me to pretty much know that he was in a 12-step program. There are words and phrases that can clue us recovery folks into one another. So I asked if he was in recovery. He said yes, and our conversation began.

There is a wonderful connection that occurs when we 12-step people recognize each other. We can drop into an intimacy of shared pain and joy, shared fear and love, that crosses all borders, all age groups and jumps between hearts very quickly.

As we began to talk, Bill confessed that at first he thought I didn't like him. He said he felt some energy coming from me of disapproval or something. But he now knew he had been wrong. I did not admit the truth to this wounded man, that he had been right. He did not need to know what I had been thinking. But I knew. His words stung me. His words chastened me. His words humbled me. How could I have judged this man so harshly? Where was my compassion, my love and my acceptance of another human being? My heart cried a "thank you" for the wake-up call. My soul said a silent, "I am sorry, my friend, forgive me."

During the 40-minute flight Bill and I got to know one another. He had been struggling with alcohol for many, many years. He was in long-term treatment and was not sure he was going to make it. As this man talked, I saw myself in early recovery. I heard the stubborn refusal to just do the work. I heard the anger with other people. I heard the harshness of self-hate and the sorrow-filled grief of someone who knows they have hurt all those they love. My heart opened and my mind gentled as I listened.

Then in a quiet voice and with all the kindness I had, I shared my own story. I talked about how it was with me years ago, when I finally stopped fighting and just did what I was told. I talked about this God that I have -- the laughing, dancing partner who holds my hand and cradles my heart. I also spoke of the joy that is guaranteed to come when we get honest and we get willing to go through the pain. We spoke about meetings and finding a good sponsor. We talked about listening with an open mind and letting go of trying to do it all alone.

Bill had big questions about God. He said he was sure that God had been with him many times in his life. He'd had "God Shots" before, but he was having a hard time finding God now. I looked at this man who was just like me, and I smiled into his eyes. "Bill," I said, "Take a moment and look into my eyes. This is where God is -- between you and me. God is my soul smiling into yours. And, wouldn't you say that the two of us sitting side-by-side on this plane is a pretty darned good 'God Shot' right here, right now?"