Jamie Catuara, 33, worked on the trading floor at the Chicago Board of Trade for 13 years. She worked her way up, took the membership examination to be a trader and found a job with a commodities trading firm. But instead of endless riches and upward mobility, she found a culture of carelessness and disregard. "They're self governed in there, so they get away with anything," she said. "There were things going on that shouldn't have been going on. People trading that shouldn't have been trading." When she voiced her concerns that laws were being violated, executives at her firm "strongly urged" her to ignore it, or else leave the trading industry behind.

One week and several meetings later, Jamie was one the 12% of Chicagoans looking for a job at the time. Her former bosses received fines from federal regulators totaling more than $300,000, or more than six times what the average American household earns in a year. "It's pocket change to them," Jamie says. "They can make that back in very little time."

As for Jamie, it's been nearly two years with few prospects. "I'm still unemployed, I can't find work. I'll never be able to find a job on the trading floor again," she said. Jamie is not alone. She finds herself in a position shared by 4.5 million other Americans who have been unemployed for more than a year, and are struggling to find a job. It's a position we haven't been in since the end of World War II.

When Jamie heard that there was an overnight sit-in inspired by ongoing protests at Wall Street in New York City, she made the drive from north suburban Barrington to the Federal Reserve in Chicago's financial district and decided to spend the night. For her, it was personal. Sitting on the street with a handful of people that first weekend, freezing and perpetually awake, she started to cry.

If you don't already know, they call themselves "Occupy Chicago," and today is their two-week anniversary. What started as a small group of frustrated people asleep in the rain has transformed in just 14 days to a small movement that sometimes attracts 100 people or more to the corners of LaSalle and Jackson. During the prime time (generally the afternoon rush hour) you'll find them in full force, playing music, cheering and chanting, and waving their signs at passing busses, cars and taxis. Frequently, the passing cars honk in support and wave, causing huge roars of cheering from the crowd.

A Voice and a Vote

The philosophy behind Occupy Chicago changes depending on who you speak to. The larger movement and other similar movements around the country have collectively been criticized for their lack of direction and absence of clearly defined goals. But there is some strength in formlessness. Occupy Chicago is not the kind of protest where you pick up a sheet of carefully crafted talking points (yet) that tell you what the 'issues' are and give you suggestions of how to be outraged.

Broadly speaking, the associated movements do agree on some things. The genesis of the Occupy movements came from Canada-based Adbusters magazine, who wrote in July 2011 that "beginning from one simple demand -- a presidential commission to separate money from politics -- we start setting the agenda for a new America." They set their sights on Wall Street to protest the acceleration of income inequality (which the group references by referring to themselves as "the 99%"), and the abuse of American democracy by moneyed interests in the corporate business and financial services sector.

They're pretty well on the right track. Incomes for the top 1% of earners in the United States have vastly outpaced the bottom 99% since the 1970s and a greater share of wealth has consolidated into corporate executives, some of whom are now earning more than their businesses pay in taxes. The day Occupy Chicago started, it was announced that Hewlett-Packard Co. had fired their new CEO Leo Apotheker after only 11 months of work, during which he drove their share price down 47%. For his 11 months of carnage, Apotheker was rewarded with $25 million in severance pay. That's in addition to a $1.2 million salary, a $4 million signing bonus, and $4.6 million in relocation assistance that he doesn't need anymore.

Stories like that can frustrate people of all ages who are trying to make ends meet in an insecure job market with unemployment threatening to return to the 2010 peak of 12%. That consistently high unemployment rate -- once a regular conversation topic in mainstream media -- has been made virtually meaningless as a measurement of economic stability as corporate profits hit all time highs starting in 2010 and continued to grow in 2011. Outside the board room the poverty population in the U.S. has grown to a 50-year high, and wage growth is still outpaced by growth in consumer goods. This dual effect of stagnant wages, negative job growth, and rising costs of goods virtually ensures that anyone who isn't already in the upper percentiles of income earners will see their money stretched more and more thinly.

Because Occupy Chicago doesn't have a formal agenda it is by definition inclusive. If it is not yet about anything then it is about everything. That can create uncomfortable situations that force people to face their differences and find common ground, instead of retreating to familiar ideological camps. But that friction generates energy into the group. You can hardly find them at any time of the day or night where people aren't gathered together, talking about the things that matter to them, and finding out what matters to other people. Without any reason not to come, fresh faces are continuously entering the protest just to see what it's all about. From there, they often find plenty of opportunity to participate.

Christy Lueshen, 23, came to Occupy Chicago for the first time in the eleventh day of protests, on October 2nd. The neuroscience graduate student said she heard from her roommate that the movement was "actually starting to grow and find direction," and came down "to do something I thought would be useful."

Two days later, she was marching with the group when someone handed her a microphone and encouraged her to lead the crowd. "I almost puked, I was screaming so much," she said. She now finds herself stopping by at frequent intervals, a pattern common to many of the protest group. "I come by in the morning before work and then again after work," she said. "But then after work I can't bring myself to leave. I had dinner plans tonight and I didn't go to them. Yesterday I skipped a date. It's addicting."

She said the crowd's energy stays high and people come and go throughout the day, with the peak of participation coming at the evening general assembly meetings at 7 PM at Congress and Michigan. After that, she says, most people go home. "Some very daring people stay the night. The brave ones," she says.

Some protestors express a feeling of helplessness at being locked out of the political process by enormously wealthy people and institutions that seem only to push policy in directions that suit them best. They come out to speak to someone new, and build their own system, because they've lost all faith that their elected officials can hear them anymore. Most importantly they come out to have a vote.

That desire to participate in some kind of political process is obvious in the way the group's membership swells during general assembly meetings, during which any volunteer can offer proposals to shape the movement. The proposal range from the formation of committees to suggestions for etiquette and behavior, to the occasional paranoid rant. During the October 4 meeting, a man who may or may not be homeless got up to speak. the crowd was at first unsure, but at Occupy Chicago everyone has a voice. he spoke clearly, and with purpose. he made many salient points. For two minutes that night, he had the attention of people who might have stepped over him to get to the train that morning.

There is an empowering sense to being handed the megaphone to speak to a crowd of 75 strangers who all repeat back what you say to them in short, rhythmic verses (called the human microphone).

Most importantly, anyone can propose anything to the group. The Chicago movement, as well as more than 100 others across the country, is leaderless, or at least it claims to be. There is a growing cadre of young people, mostly students, who have the time and energy to devote to organizing committee meetings and leading group discussions.

The group meets twice every day, and with each meeting it becomes more clearly defined and garners stronger support. At the October 5 meeting, one of the speakers said the group was close to publishing a list of "about a dozen" organizations and unions that would support Occupy Chicago and organize additional protests and marches to conclude in front of the Federal Reserve. One of the largest is this Saturday, when an estimated 1,000 people will march in protest of the continued expense and loss of life associated with the ongoing Afghanistan and Iraq military actions.

The movement was originally a stationary overnight protest, with a handful of people lined up against the wall of the Federal Reserve, wrapped in plastic sheets to stay dry through the initially rainy last week of September. Facing increased pressure from police on Monday, the group was forced to go mobile or risk arrest. So they packed up their donated supplies, stored some in a nearby church, and started marching. If police intended to stifle the movement by refusing to let them sleep, it didn't work. "We're here and we're loud," said Austin McClain, 24, adding that the day following the police crackdown "was one of the most energetic days I've been here, and I've been here for over a week."

They now have at least two marches a day, timed to reach the maximum number of people and attract new members to the group. "If they want us to stay mobile, we'll stay mobile, and we'll do it in such a way where our impact can be magnified as much as possible," said Mark Banks, one of the group's core volunteers.

The marches have added momentum and energy to the group, but containing it is not always easy. It was during one of the marches that someone broke a storefront window yesterday, although the group quickly distanced themselves, reminding members via Twitter that they are a "non-violent, peaceful movement." During another, 21-year-old Ricky Staffieri, a Columbia College Chicago Theater major ran into the street to the cheers of students and teachers high up inside Roosevelt University. He waved a sign that said "The Banks Robbed Us Blind," and cheered back. "I feel like it's getting better and better," he said. "It's beautiful what's happening here. I think everyone is finally coming together. It's getting better and better every day."

All photos by Ryan Williams. See more of his work here. 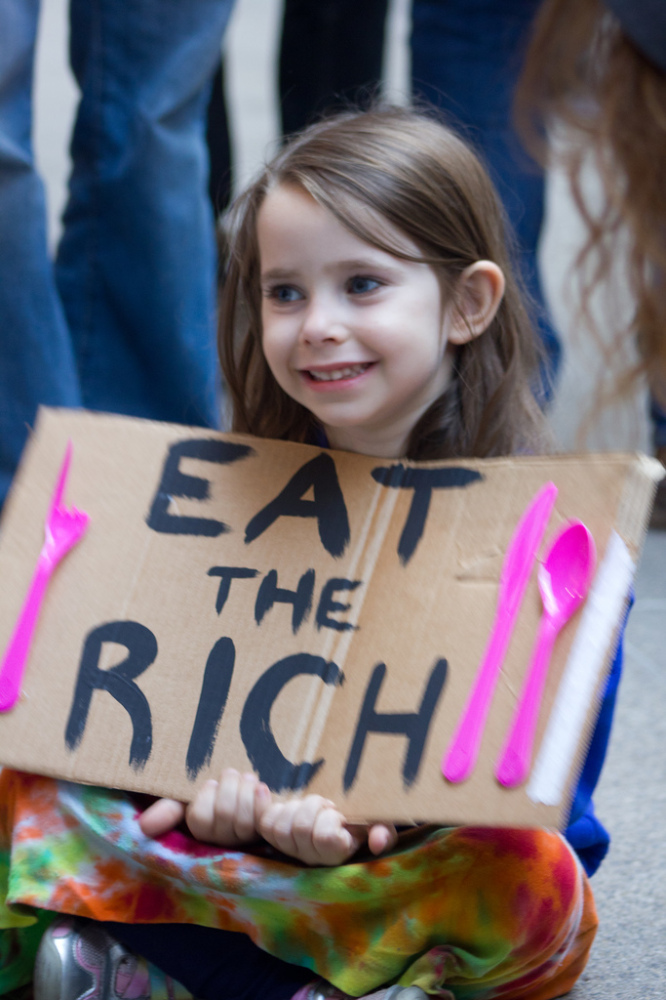