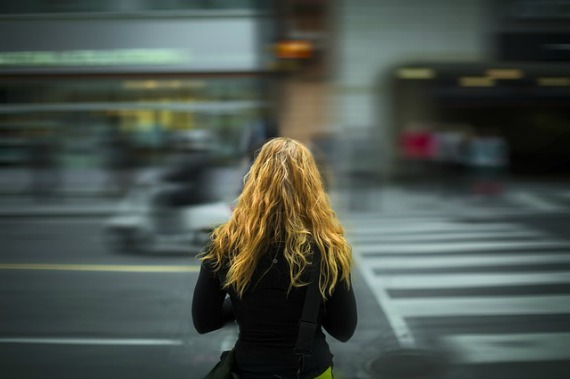 When people talk about why they aren't happy, they usually can quickly tick off a list of things. They talk about a job that is going nowhere, overwhelming financial debt, complicated relationships that are stressing them out, or being unhappy with where they are living. When asked to describe what they could change to be happier, they can sometimes be hard-pressed to find an answer.

Some might joke and say, "You don't by any chance have a winning lottery ticket you don't need, do you?" Others will feel bad for saying anything and cite starving children in third world countries as people with real problems. Many will start listing off their pile of regrets: choosing the wrong major in college, taking the wrong job, playing it too safe, never speaking up, or getting a divorce.

Regret does not have to be a permanent condition.

So many people see their wrong turns or mistakes as set in stone. They don't believe that their choices can be undone and see themselves as trapped. When challenged with the idea that things could be undone... that they might be able to get a new job, start a new career, live in a new place, or find a more fulfilling relationship, they often find themselves saying the two most damaging words to their happiness -- Yeah, but...

• Yeah, I know I can get a new job, but anything I take next would likely just be a lateral move or would require I take a pay cut.

• Yeah, I know people change their lives all the time, but I am still paying off a mountain of student debt from my last mistaken career move. Why would I want to sign up for more?

• Yeah, I know winter isn't really for me, but my family and friends are all here. I'm too old to start over.

• Yeah, I know I've talked about being unhappy in my marriage for years, but I've got three kids. It's not their fault I married the wrong person. Who am I to disrupt their lives?

When you say "Yeah, but..." you're quitting on yourself.

An obstacle isn't a reason to stop.

You might be miserable in your current job but feel trapped by the belief that anything you do instead would mean a pay cut, a lateral move, or sacrificing the benefits of longevity with one place. These are all legitimate concerns but they aren't reasons not to make a switch. Start by asking yourself how you would approach these things.

• How much of a pay cut are we talking? Have you really asked around, networked, and heard that you're too expensive for a new company or are you just imagining that might be the case?

• Are there companies that would benefit from your experience because they are struggling in the areas where you excel? If a pay cut is proven inevitable, are there ways you could supplement with lost income with freelance or consultation work?

• Have you connected with mentors or former supervisors about this and sought their consult? Is it possible that your current skill set and expertise might qualify you for a higher position in a new company?

Does your happiness have a price tag?

People spout the idea that you shouldn't leave a company unless you're moving up the ladder and/or getting a pay raise. People stay in bad marriages because they can't imagine taking on the financial and emotional costs of divorce.

How are you measuring the cost of your happiness? When you only consider the numbers and the bottom line, you're leaving out an important part of the equation: the cost of unhappiness. When you're living a less than life, you have less energy, less creativity, less inspiration, and less optimism.

If you're in a bad relationship or marriage and feel trapped because of kids, the number of years invested, finances, or a fear of being alone, you have no idea how much your dissatisfaction is impacting all of your other relationships, especially ones with your kids if you have them.

You just don't know how your other relationships might improve, how your life might change, or what kind of life you'd be inspired to create if you chose to do something about an unsatisfying relationship.

If you're stuck in a miserable job, you have no idea what you'd be able to create for yourself if you weren't feeling as though your soul was being sucked out of you every hour of your work day. Job dissatisfaction is deadening. Making a shift just might bring everything to life.

Heather Gray
Choose to Have It All.com