"We are now part of a fraternity that no one wants to be a part of," Cleopatra Cowley-Pendleton, mother of murdered 15-year-old Hadiya Pendleton, told a group of University of Chicago students at an Amnesty International event last December. She reminded them that no matter who they are, gun violence affects them. "Regardless of your background, origin -- whatever -- you should care," she said.

The national sense of urgency over the reckless violence that two years ago yesterday took the life of an honor roll student like Hadiya Pendleton -- who just a week earlier had performed at President Obama's inauguration -- has vanished. Two years ago First Lady Michelle Obama returned to her hometown to say "Hadiya was me" and Pendleton's parents were in attendance at the President's State of the Union address; there was no mention of Pendleton in this year's address. 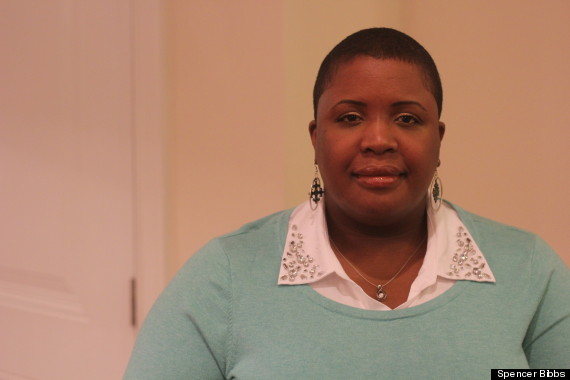 Yet there are signs of change here in Chicago, however gradual.

Also since then, Cowley-Pendleton has founded the non-profit Hadiya Pendleton Foundation to help combat gun violence in Chicago and nationwide. The suspects behind her daughter's murder are awaiting trial. And Alderman Pat Dowell, whose ward is where Hadiya Pendleton lived when she was murdered, has taken the first steps toward renaming a local park after her in her honor.

"We have lots of ideas and things that we want to do, but we also know we have to crawl before we walk," Angela Rudolph, executive director of Hadiya's Foundation, told me at the organization's headquarters earlier this month. She is the organization's only full-time staff member, joined by two part-time volunteers.

In Chicago's Bronzeville neighborhood, at the Martin Luther King Community Center -- a brutalist, brown brick building where President Barack Obama cast his ballot in the 2012 election to cheers from faraway supporters behind barricades -- Hadiya's Foundation operates out of a fluorescent-lit corner basement office no larger than an apartment living room. The lease to the space has been gifted by city for $1 through December 2016. 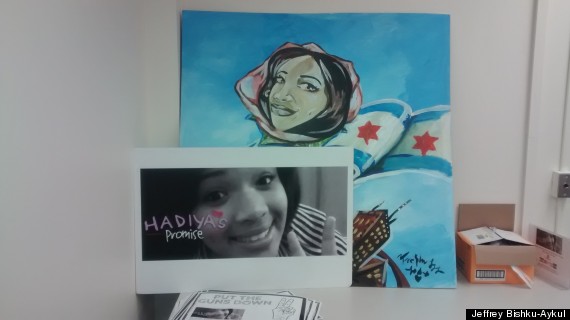 A painting and a poster at the Hadiya Pendleton Foundation office. (Jeffrey Bishku-Aykul)

On the day I visited, propped against a corner wall on a table was a painting of Hadiya Pendleton's face in a rose sprouting from Chicago's flag and a placard bearing the Hadiya's Promise logo, superimposed on the now-famous selfie of her giving the peace sign. Below sat a stack of xeroxed fliers promoting the organization. "Put the guns down," it read, "Because every child matters" -- with the hashtags "#BlackLivesMatter" and "#AllLivesMatter" to its right.

Rudolph sat at the office's main table -- four tables combined to make a bigger one -- where she was examining stacks of letters.

This year Amnesty International picked Hadiya Pendleton as one of 10 cases for its Write for Rights program, which encourages people from across the world to write letters on behalf of human rights causes throughout the world. Its profile of Pendleton is part of the group's larger effort to end gun violence in the U.S.

"We have one here from Korea," Rudolph told me. "We have other letters here from all over the country. We've gotten letters from Europe, South America, all over the place."

"India," Cleopatra chimed in over speakerphone.

Rudolph, an education and juvenile justice reform policy advocate of more than 17 years who watched Pendleton's story unfold on the news, described the emotions surrounding her tragedy as a "lightning in a bottle" moment.

She said that when she's out with Cowley-Pendleton and her husband, strangers "want to talk about how there was something about Hadiya that really speaks to them in a very personal way." She recalls in particular one volunteer, a Jewish woman from the other end of the city, telling her over the phone she was reminded of herself by Hadiya Pendleton and her family.

"We had to do something, because we didn't want this to be a lost opportunity," Rudolph said. "We wanted people to always be able to tap into that feeling, and to be motivated to do something."

"It's because of my daughter's death that I've become as involved as I am," Cowley-Pendleton said. She added, "I don't know that the work has actually been therapeutic for me, I just know that it is a necessary work."

Part of that work is a new initiative by the foundation launched last summer, Hadiya's Promise. Its goal is to advocate for policies, programs and law enforcement practices to help the victims of -- and youth at risk of committing -- of gun violence. Last November it hosted its first ever Hadiya Pendleton Intergenerational Summit, a discussion attended by Mayor Emanuel which drew more than 70 youth.

Its aim, according to Cowley-Pendleton, is to engage youth who are affected by gun violence but are shunned when it comes to finding ways to address it. "It's about the acknowledgment of what's happened out here and what's lacking, and how to repair it," she said. 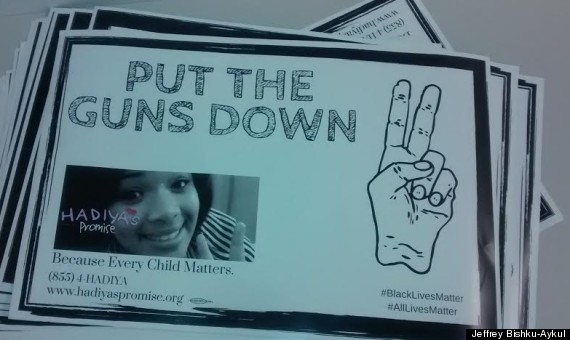 Summit attendees identified seven top priorities for Hadiya's Promise, including fostering trust through dialogue between police and youth and increasing access to vocational training for students who aren't college-bound.

Already, Cowley-Pendleton and Rudolph both say the biggest change since January 2013 has been an increased focus in Chicago on the root causes of gun violence.

"It's not sexy to talk about intervention," said Rudolph, who has been in talks with Mayor Rahm Emanuel and Chicago Police Department Superintendent Garry McCarthy. "It's a different kind of investment. And right now our systems are focused on a punishing perspective."

"To me, the biggest change has been a recognition that we are not going to arrest our way out of this problem," Rudolph added. "Previously, there was only talk from Superintendent McCarthy and from the Mayor around the notion that we need to swarm in, we need to have more police presence on the street, and there was scant conversation around this question of what are we doing with our highest-risk young people."

Rudolph cites Mayor Rahm Emanuel's Commission for a Safer Chicago -- which she sits on -- as an example of the city's broadening approach to gun violence.

"In my opinion, the importance that has been placed on trying to resolve the cause of the issue of gun violence, I think it became a bigger priority," Cowley-Pendleton said. "I think the lives of our young people are being valued even greater."

Challenges remain. At the same time that progress has been made, the city's famously harsh gun control laws have been relaxed: In January 2014, Illinois became the last state to legalize concealed carry; since then plastic stickers with a symbol of a gun crossed out have become as common as no smoking signs. The Hadiya Pendleton and Nyasia Pryear-Yard Stop Illegal Trafficking in Firearms Act of 2013, legislation sponsored by Congressman Bobby Rush (D-Ill.) and endorsed by Pendleton's parents that would increase penalties for straw purchases of guns, died in the House. And the city's South and West Sides still suffer disproportionately from gun violence.

Alderman Will Burns -- whose ward is where Pendleton was shot -- first put Rudolph in touch with Cowley-Pendleton. "The tragedy is the same today as it was two years ago," Burns told me in a recent interview. "Any man's death diminishes me. But, there's something about losing a young woman filled with promise and potential who was doing nothing wrong."

He added that he's "so beyond tired" of the city's social media feud-fueled murders. "And I hope the adults who enable that kind of behavior and those young men -- and young women increasingly -- do the right thing and turn them in. Because it's not just about maybe saving Hadiya's life or another Hadiya, it's about saving their life, too."

Although many in Chicago remember Pendleton, mentions of her name in the headlines have become less frequent. As Barack Obama approaches the end of his presidency, Chicago news outlets have instead turned their focus to controversial plans to site his presidential library in city parkland and whether the president will move to New York and take his library there with him.

As 2017 approaches, it is possible -- even likely, some say -- the Obamas will leave Chicago for New York. And along with them, gone may be the prospect of a presidential library, the tour buses that pass his house and the national spotlight on South Side murders.

But whether or not President Obama -- and most of the country - move on, it is also possible that Cleopatra will be here in Chicago for years to come, working with Rudolph in her daughter's memory.

South Side reporter and freelancer