Chicago Cubs outfielder Tyler Colvin has been hospitalized after suffering a terrifying injury against the Florida Marlins. Colvin was running home from third base when teammate Welington Castillo's bat split, sending a portion of the splintered object flying towards Colvin.

The bat fragment struck Colvin in the chest, and the 25-year-old was hospitalized. According to ChicagoBreakingSports, the wound "was only a few inches from his heart and could've been much more serious." Instead, there is "minimal external bleeding" and he is in stable condition, ESPN.com reports.

Keith Olbermann tweeted a picture of the bat heading in towards Colvin's chest. Scroll down to see it, as well as video of the scary moment.

Update from the AP:

MIAMI -- Cubs rookie Tyler Colvin was hospitalized Sunday after his chest was punctured by part of a shattered bat.

Colvin was standing on third base in the second inning of Chicago's 13-3 victory at Florida when he was struck by a sliver of Welington Castillo's maple bat. Castillo doubled on the play and Colvin scored, but was replaced in the field in the bottom half.

"I feel really bad about it," Castillo said. "It wasn't on purpose, but he's my teammate. I hope he's getting better."

A Cubs spokesman said Colvin was in stable condition at Jackson Memorial Hospital and is expected to remain there for the next few days for observation.

Colvin was watching Castillo's liner into the left-field corner and looked surprised when he was hit by the bat.

"These bats, I'm amazed it doesn't happen more," Cubs manager Mike Quade said. "We have seen guys get hit with pieces, but to actually get stabbed with one, I just don't ever remember (seeing it)."

A Cubs trainer said Colvin was hit in his upper right chest, allowing air into his chest well and potentially into his lungs. He had very little external bleeding.

Colvin was being treated with a chest tube to prevent a collapsed lung.

The right fielder is expected to miss the rest of the season. He hit .254 with 20 homers and 56 RBIs in his first year in the majors. 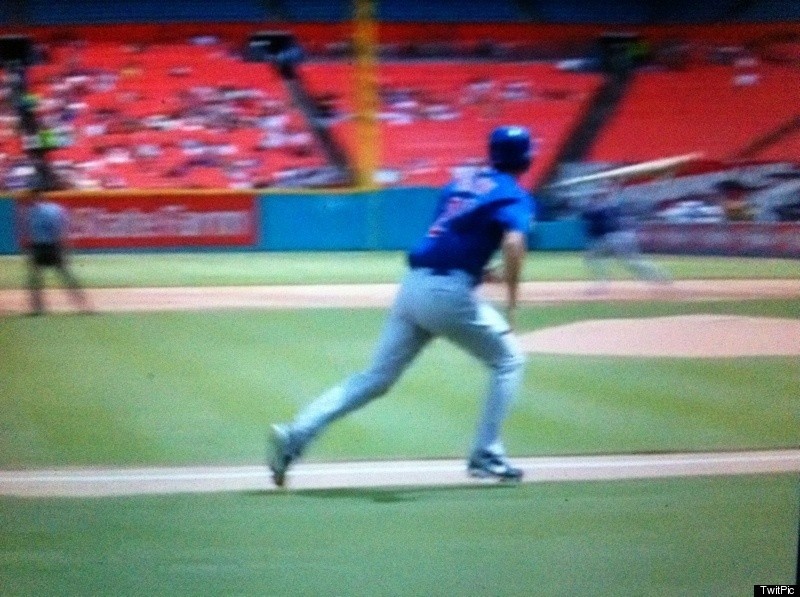