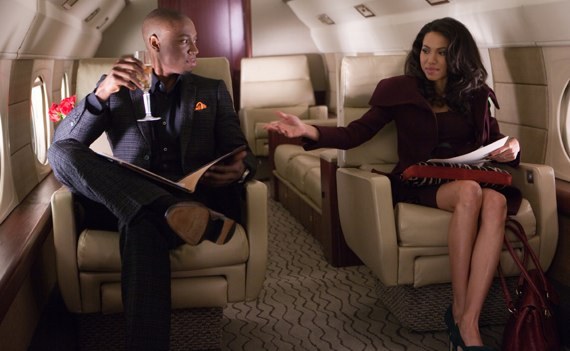 Today, a new movie directed by Tyler Perry (Star Trek) that conveniently has the director's name in the title, Tyler Perry's Temptation -- or, if you want to be a real stickler, Tyler Perry's Temptation: Confessions of a Marriage Counselor -- is playing at your local multiplex. Since it wasn't screened for press, I became one of 37 people on Thursday night to purchase a ticket for the 10:00 p.m. showing near Union Square in New York City. As a service, I went ahead and answered every question you could possibly have about Tyler Perry's Temptation.

A: Well, the out-of-nowhere ending certainly is bonkers. The first 90 percent of movie is just boring.

A: Honestly, I have not been this bored in a movie theater since I was 6 years old and saw Ordinary People.

Q: If you're going to be blurbed in this weekend's commercials for Tyler Perry's Temptation, what quote do you think will be used?

Q: Was anyone else at your showing bored?

A: I've never before seen a movie with a crowd that was less interested in what was happening on screen. People were openly talking to each other and checking their cell phones. One group in front of me was posing for "wacky" photos.

Q: That sounds annoying. Was it?

A: Usually, this type of behavior during a movie would bother me, but in this case I welcomed the distraction.

Q: Who is tempted during Tyler Perry's Temptation?

A: Well, I, for one, was sorely tempted to fall asleep.

Q: Is anyone in the movie tempted?

A: Judith (Jurnee Smollett-Bell) is married to a charming enough man named Brice (Lance Gross). Through her job, she meets a social-media titan -- the third biggest behind Mark Zuckerberg, to be exact -- named Harley (Robbie Jones).

Q: Does Harley tempt Judith with his charm and wealth?

A: No, Harley charms Judith with clunky lines like, "It's very sexy how slow you're breathing," and by constantly talking about how much he loves his ex-girlfriend.

Q: Does Harley have anything in common with Judith's husband, Brice?

A: Other than chests sculpted by the hands of Zeus himself, no.

A: Because her life is just so boring. Which she's reminded of every day by her exciting co-worker, Ava (Kim Kardashian).

Q: Is there any chance that Kim Kardashian is secretly a good actor?

Q: How bad is Kim Kardashian as an actor?

A: Seriously, what is the point of answering that?

Q: What line actually got applause from the audience?

A: When Kim Kardashian's character says, "Push me out of a window, why don't you?"

A: Judith's mom is very religious and views Harley as Satan. To the point that she refers to Harley as Satan to his face. Basically, Judith's journey in Tyler Perry's Temptation is her journey from Heaven to Hell -- which also makes this movie sound a lot smarter than it actually is.

Q: What is Brice doing while Harley is stealing his wife?

A: Sitting around being nice.

Q: Does Brice have a job?

A: Brice works at a pharmacy that just happens to have hired a new employee, Melinda (Brandy Norwood).

Q: What percentage of readers would be more likely to know whom you're talking about if you'd simply left off Brandy Norwood's last name?

Q: Does Melinda have a dark secret?

A: Melinda is running from an unnamed man who used to abuse her. Which has totally nothing to do with that mysterious ex-girlfriend that Harley keeps talking about.

Q: Is Harley the type of character who says things like, "I love too hard"?

A: Oh, you only wish that was the big twist.

A: Angry over losing his wife, Brice, after visibly stewing for a few moments, dramatically snaps a pencil in half. I imagine the genesis of the scene going something like this:

Lance Gross: "I want to convey how angry I am. I should break something."

Tyler Perry: "Well, we have a small budget. We really can't afford to break anything too expensive. Wait ... here's a pencil."

Q: Is there any reason I should see Tyler Perry's Temptation?

A: Never cheat on your spouse or God will strike you down.