It was a stormy evening, and the rain was pouring hard on the rooftops in Sunnyvale, Calif. Margaret has just finished preparing a delicious dinner for her husband John and left it simmering on the stove. John had a doctor's appointment and was due home any minute. Recently, he had been constantly tired and complained of increased thirst and a frequent need to urinate. While waiting for her husband, Margaret decided to relax a bit on her favorite couch and started to doze off as if hypnotized by the harmonic rhythm of the raindrops drumming softly on the rooftop of their house. She woke up abruptly as she heard John open the front door. Margaret's instincts told her right away that something was wrong. The usually-stout John seemed to slouch now, as if an invisible burden was pressing on his shoulders. She sprang to her feet and took a few hesitant steps toward her husband. "What's wrong, dear?" she asked softly. "Margaret," he replied in a quivering voice "please sit down, we need to talk."

Indeed, the life of a person diagnosed with diabetes (and that of his family) can change in a blink of an eye. Diabetes is associated with an increased risk of a variety of health problems such as stroke, heart attack, and eye, skin and foot complications.

Dr. Yadon Arad explains that diabetes is simply an abnormal elevation of blood sugar. It can be the result of insulin deficiency (Type 1 diabetes) or insensitivity to insulin action, aka insulin resistance (mostly seen in Type 2 diabetes). According to the American Diabetic Association (ADA) 1,900,000 people in the U.S. are having a conversation on diabetes for the first time with their loved ones every year. The total annual cost of diagnosed diabetes in the United States is estimated by the ADA to reach $174 billion and includes direct medical costs and loss of productivity.

Why Do I Care about Diabetes?

Beyond my empathy to the personal suffering of people with diabetes, I'm also an entrepreneur whose personal commitment is to use technology to help people develop healthy habits and fight chronic illnesses. One primary goal is to help our nation be healthier; another is to help reduce the financial burden of chronic illnesses on all of us. As such, I'm constantly searching for the most significant national health-related challenges to tackle, and diabetes definitely qualifies as a major challenge.

The Art of War against Diabetes

In The Art of War, Sun Tzu suggests that, "The supreme art of war is to subdue the enemy without fighting." The same could be applied to the war on the most prevalent type of diabetes: Type 2 diabetes. Peter Melamed, Ph.D. suggests that the best way to beat Type 2 diabetes is to avoid it in the first place. "Type 2 diabetes does not suddenly fall from the sky." The 79,000,000 people diagnosed as pre-diabetics are a good illustration of this point. These people have an elevated blood sugar level and are more likely to develop Type 2 diabetes.

The great news for people with pre-diabetes is that most of the experts agree that this condition is reversible with the right nutrition and sufficient levels of physical activity.

An orchestrated campaign by allied forces comprised of individual and institutional health care providers, corporations, consumers, restaurant chains, entrepreneurs, government, and food producers can really make a difference in the battle against diabetes. Furthermore, expanding the focus of the allied forces beyond the Type 2 diabetes frontline into the pre-diabetes territory, as well as helping the entire consumer population to develop healthy habits, should make a tremendous difference over time. 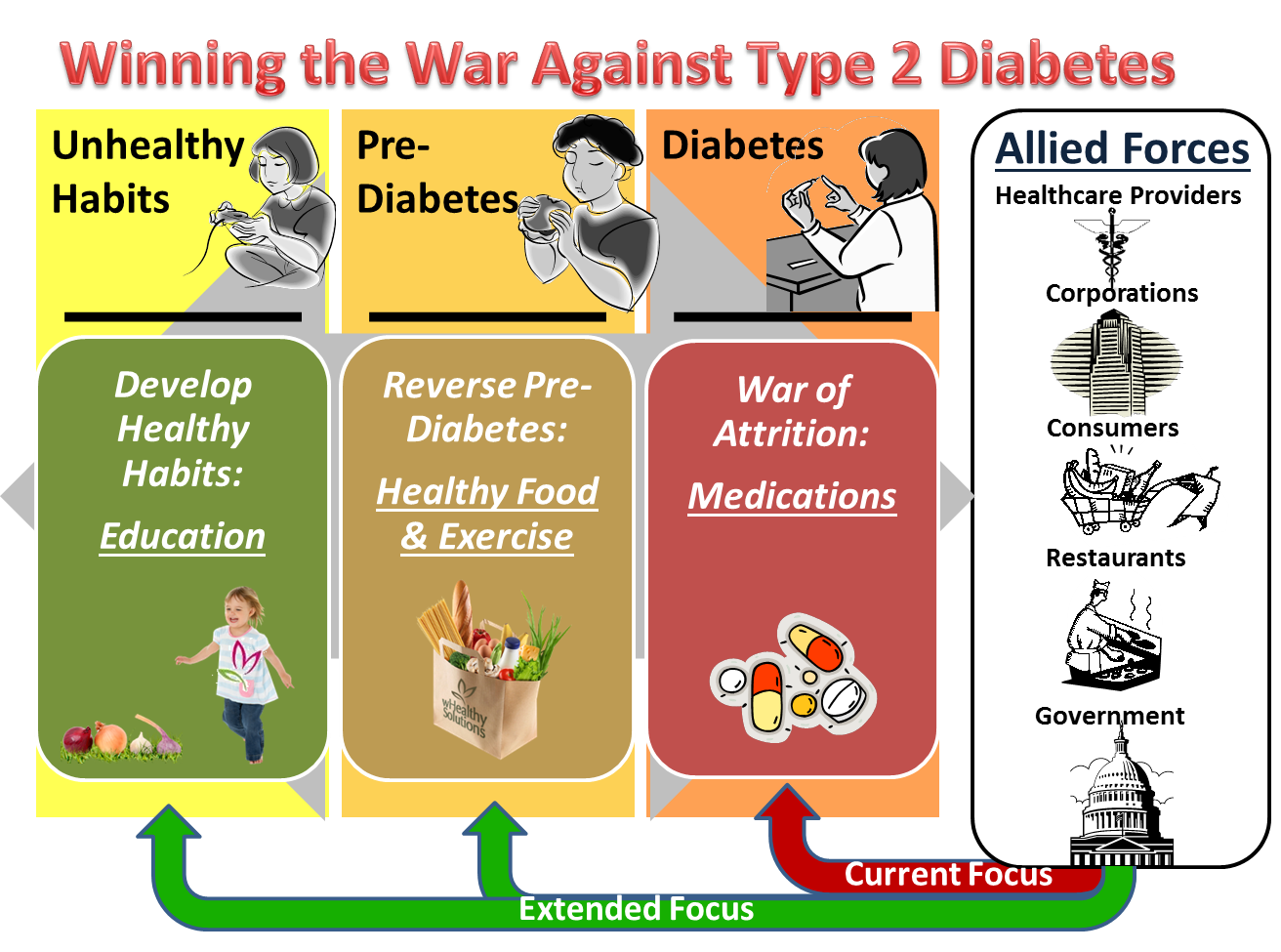 One key campaign initiative should be to educate patients on the importance of dealing with pre-diabetes early on. Using technology, including web and mobile apps, can help both educate and promote healthy living habits. Other potential initiatives include:

Diabetes is hurting people both at the personal and the national levels. Think back to John and Margaret, and then look at the statistics across the country. The best way to fight Type 2 diabetes is to avoid it in the first place. Developing healthy nutrition and physical activity habits are critical factors in avoiding diabetes. The key players in the fight against diabetes should expand their focus and help those who are at risk of developing diabetes at an early stage to avoid becoming diabetic, as well as help the entire population to develop healthier habits.