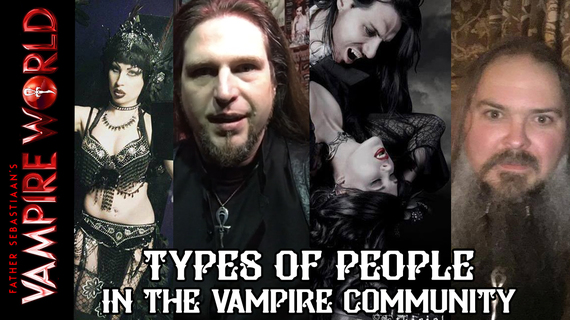 In the modern vampire community, there are many designations of people who relate to in whole or part with the archetype of the vampire. As a professional fangsmith and event coordinator for Endless Night Vampire Ball and a devotee in the fangdom of Anne Rice, I have had the opportunity to meet more people in person in the "modern vampire community" in person than anyone else alive today. I have been involved in the international vampire community since 1993 and the following are my personal classifications on the different types of vampires.

Vampire fangdom is a diverse group that loves variety or specialized fiction genres such as Buffy, Twilight, Anne Rice, and Charlene Harris. Many cosplay (costume play) their characters at fan gatherings.

Scholars are people who have studied both the modern vampire culture and mythology, such as J. Gordon Melton (author of The Vampire Book), Katherine Ramsland (Piercing the Darkness) and Rosemary Ellen Guiley (Vampires Among Us). They do not identify themselves as "vampires," but definitely are a part of the vampire community. Kind of akin to the Talamasca in Anne Rice's novels or Watchers in Buffy the Vampire Slayer.

Roleplayers are lovers of live action roleplay, or "LARP." They have their own game called Vampire the Masquerade, in which they take on the role of vampires pretending to be humans. They act out their characters in an interactive cosplay in nightclubs, rented hotel spaces or gaming conventions, hosted by a storyteller who directs the game.

Lifestylers--who typically spell Vampyre with a "Y"--are individuals who find empowerment in the archetype of the vampire mythology in real world. These individuals comprise most of my clients of Sabretooth fangs and Endless Night Vampire Ball events. Lifestylers may be part or full time, and their involvement ranges from dressing up as vampires, to having a "vampire philosophy," to having a life path as a vampire. Sometimes they identify with some of the other types of vampires. Lifestylers are different from roleplayers in that vampirism is a lifestyle choice, not just a game. Life-stylers make up the majority of the modern vampire culture.

Friends, lovers, supporters and those who understand the vampire culture yet do not identify fully as a vampire. They are often function as consenting donors for some types of vampires. The term was invented at Long Black Veil in 1997 for the lovers, friends and partners of Vampyres who were not vampires.

One step deeper than lifestylers are living vampires. The focus of living vampirism is the Quest for Immortality, be it through technology, creating a legacy of their name or works, or spiritual. Examples include the Order of the Vampyre (1984), Temple of the Vampire (1989) and Ordo Strigoi Vii (2001). Living vampires are spiritual and have a deep and defined philosophy about what it means to be a living vampire in the modern world. They are very private about their path and do not seek public recognition. They almost never identify as psychic or sang vampires, described below.

There are two types of psychic vampires: ethical and traditional.

Traditional psychic vampires usually are unawaked / unaware to what they are and are found outside the vampire community. This is the original concept of the psychic vampire, as defined in defined in Anton LaVey's book the Satanic Bible and Dion Fortune's book Psychic Self Defense. They are individuals who have the ability, sometimes unwitting, to drain others of their energy and emotions. They do so by being negative, angry, gloomy, demanding, or critical, or, in some cases, by nonstop chatter and questions. Their lives are almost always in turmoil. This seems to be entirely an emotional condition and psychological, not esoteric.

Ethical psychic vampires are individuals who believe they have an "energy deficiency" and their bodies do not create enough life-force (prana, chi, ki) to be able to sustain their physical, emotional, and spiritual health. They must feed from consenting donors to be able to replenish their energy, and have ethical procedures for doing so. Some unawakened ethical psychic vampires fall into the category of "traditional psychic vampires" need training and an "awakening" to identify and manage their condition. A great resource on this subject is The Ethical Psychic Vampire by Raven Kaldera.

Sanguinarians or "sanguines" for short are individuals identify with the need to drink human blood to balance or replenish their physical, spiritual and mental health. Some believe they must drink blood to obtain vital life-force energy. Their need to drink blood often associates themselves with a faction of the vampire community who call themselves "real vampires." Recently there is a fast growing partition by the sanguinarian community to disassociate from the vampire archetype.

For most sanguinarians, blood-drinking is far more that a sexual attraction to blood or a blood fetish, and has a much deeper meaning. They also do consider themselves different from sufferers of porphyria, a congenital bone marrow disease that makes sufferers crave blood, have a sensitivity to sunlight, and have deformities of cartilage, all characteristics associated with vampires.

Sanguinarians are often considered taboo even within parts of the vampire community due nature of the subject and the fact that drinking blood is highly risky and it is nearly impossible to safely avoid contracting blood-borne diseases such as HIV, hepatitis and syphilis. Also, drawing blood from a human body usually requires a licensed medical professional such as a phlebotomist, nurse, or doctor.

Numerous studies have been done on sanguinarians by psychologists and researchers, yet there is no solid psychological or scientific evidence to validate the need of the sanguinarians. Sanguines often attract attention from sensationalist media, especially around Halloween, because they are what most of the mundane world first thinks of when they think of a person living the vampire lifestyle.

Most practicing sanguinarians go to great lengths to find consensual donors and educate themselves on safety techniques, such as getting their blood tested and limiting blood exchange partners to a monogamous relationship. You can find dozens of sanguinarian resource websites and support groups online.

When I first entered the vampire community in 1993, sanguinarians were the only type of "real vampire" and everyone else was considered a lifestyler. However, with the rise of the internet, the community has expanded and changed.

Hybrids are those in the RVC who consider themselves to be both sanguine and psychic vampires.

The vampire community is a very diverse place with many different interpretations. The above are just a few.

What type of modern vampire do you most associate with?