With a month and a half still to go in 2013, the Philippines has already reached the end of the alphabet and literally has no letters left for naming disasters that may yet befall them. This month's Pacific typhoon -- the most powerful ever recorded -- was called "Yolanda" here. And that name was not chosen at random -- it follows the strict alphabetical order for christening every tropical storm that, year by year, strafes the Philippine archipelago. Less than one year ago, typhoon Pablo struck the country. Between then and now, there were enough storms to use up names starting with letters P through Y. Then, this week, Zoraida made landfall. That was the last straw.

Even journalists, normally not at a loss for words, are resorting to vague statements: "This is beyond description." That's because we have abused words like devastation, catastrophe, and tragedy so much, and we have such a fondness for images of biblical and cinematic proportion that, nowadays, it's all one great, sterile cliché. Were there a lot of casualties? 10,000? Is it like the tsunami or Fukushima?

Tacloban is the place from which my fellow reporters are mailing their postcards home these days -- a place that might as well be the end of the world. A mishmash of misfortunes. It assaults all five senses at once: instead of a nice breeze from Cancabato Bay, there's a stench. When the wind blows in this port city, you had better hold your nose. At a waterfront park across from City Hall, 200 bodies lie waiting in plastic bags. A little man wearing a mask and a measure of serenity sketches a map of the site: a line drawing, almost like a child would make, of a house with a tree next to it and small squares representing the bodies. His task is to identify them. But that's not the priority right now. Water and food are what matter most.

The Daniel Z. Romualdez Airport has had its glorious name shortened to Daniel Z., for the rest of the sign has collapsed. The terminal is dimly lit by only two spotlights. A tangle of steel adorns the roof: a crumpled passenger staircase. And the control tower gazes wistfully out over the bay, like those lonely lighthouses at the ends of the earth in Norway and Ushuaia. Crumbling and sickly, surrounded by overturned cars and uprooted trees. A thousand people envelop the tower, trying to enter the airport. It smells of urine and decay.

At night, air traffic controllers and soldiers, carrying flashlights and wearing headlamps, climb the stairs of what was once the eighth largest airport in the country. They grope their way up the stairs, lights zigzagging like miners' lamps. These are the men who will show the pilots where to land. This is all the infrastructure there is to greet those arriving: barely more than a flashlight on the horizon. The city is entirely without lighting -- only City Hall has any electricity. Otherwise, it is totally dark and blind.

The runway rumbles. A deafening, military roar, but it lifts the spirits -- the bustle of military aircraft and helicopters evacuating helpless families and bringing humanitarian aid.

The terminal is only 7 miles from the center of the city. But it takes 45 minutes or more to get there. Along the first stretch, there is rubble more than 6 feet deep piled on both sides of the highway -- one of the few roads that have been cleared. It is pointless to carry a map of Tacloban, as most of the streets no longer exist: they are underwater. People keep piling bodies on the shoulder of the road. The government does collect them, but more soon appear. They cover the bodies as best they can. If one could touch the topography of this place, it would feel like a piece of paper someone crumpled up in a fit of anger. This is the Tacloban skyline's new look. There is a new landmark near the entrance to City Hall -- a police boat the typhoon deposited in the middle of the road. And the mountain visible at the horizon is bare, as if devastated by fire. Huge coconut trees that have been topped and "groomed" against the grain are still standing fast.

That's Tacloban. Yes, it can be described, but it's overwhelming. There are two things you will read in newspaper reports that are true but do not even come close to conveying the reality: that there have been lootings and attacks, and that help is taking a long time to get there.

Typhoon Yolanda was a category five storm and the most powerful in recorded history: never before had a tropical storm made landfall at more than 185 mph. Hurricane Katrina, which devastated the southeast United States, was also a category five but was not of this magnitude. It took almost a week, even for the army of one of the world's most advanced nations, to organize help and respond to the crisis. Meanwhile, the Philippines -- a developing nation -- has been doing the best it can on a handful of islands. Archipelagos that have been torn to shreds and are very difficult to reach. Remote. Journalists who have come here know this. In fact, there has been very little news from other impacted areas. Some small islands have literally dropped off the map, as up to 90% of their surface is underwater. How can you deal with a situation like this?

Well, help is here and more is on the way. Even though there is nothing at all in this place.

This devastated population of over 9.5 million needs absolutely everything. The WFP (World Food Program of the UN) has secured a hangar to stockpile hundreds of tons of food, water, and other items. Yesterday, as she walked among the sacks of rice, Department of Social Welfare and Development Secretary Corazón Soliman, a short, stocky woman, was mistaken for one of the volunteers. Military vehicles are currently being used to distribute rice within a 19-mile radius. But there is little water. And rice is no good to eat without water. Action Against Hunger has already sent more than 100 tons of aid -- and not just food. We are hoping to top 150 tons. Soon those supplies will be getting distributed from that hangar.

Dozens of Tacloban residents work as volunteers at the hangar in exchange for food. From here, food is distributed to the towns in a peaceful and orderly process. A neighborhood project of mammoth proportions that employs the victims themselves.

Those who have no experience with this type of event will not understand that you cannot drop thousands of tons of food in some random location or park a truck in the middle of a plaza and distribute the food haphazardly. A few days ago, the government tried something like that, and eight people were trampled. The government does make some absurd decisions. The curfew, for instance: how are people going to stay off the street when there is no place else to be? Hardly any houses remain standing.

Regarding violence, no question that it has occurred. But it was shops, supermarkets, and warehouses that were looted. Everyone here says it: looting is a must -- and it's not robbery. And yesterday, set against all the talk of robberies and assaults, there was a stunning scene: hundreds of people waiting in line, patiently, after nearly a week without eating. A very long, orderly line of people outside the stadium and convention center that is now an evacuation center. In terms of character, these people are altogether a different breed. They call this place "the Cuba of the Pacific." Perhaps they have some of that Caribbean patience and, unlike us, are not prone to hysterics. It is a marvel to behold.

Yesterday, the sun was shining. And although there was still the pervasive stench, some signs of normality were starting to appear: the first regularly scheduled transit bus was running, some people were roasting a suckling pig in the street and offering the meat to others. Even so, it will take years to clean up the area.

Perhaps it is only this running out of letters -- these A to Z typhoons -- that, to some extent, accounts for the attitude of Tacloban's citizens: always self-controlled, smiling, friendly, and polite, they keep on doing whatever they can to improve their situation. Many have lost every last thing they had, and many still have no idea what happened to their families. Numerous children are on their own, with no living relatives.

Action Against Hunger, which has had a long presence in the Philippines, has mobilized hundreds of tons of humanitarian aid that, along with other teams of aid workers, will make this situation more tolerable. But so much more is needed. In the entire course of history, no one has ever seen anything comparable to this. But the problem with letters, words, and images is that they get used up fast. They're good for a little while, but soon new ones are needed. And in January, the alphabet roulette will start all over. 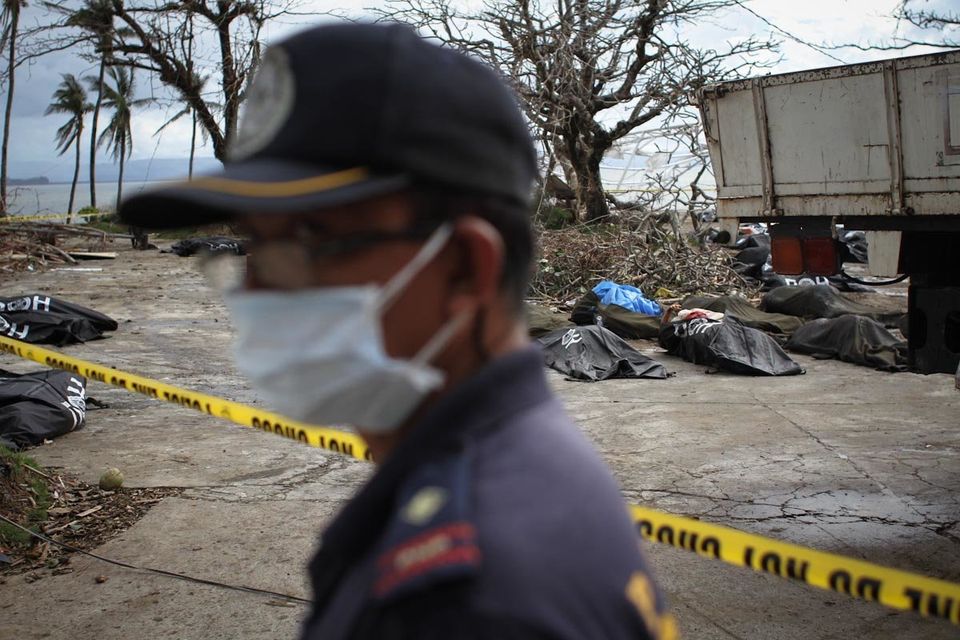 1 / 16
A policeman, near the City of Tacloban. His task is to help recover and identify bodies of Typhoon Yolanda victims. November 14, 2013.
Daniel Burgui Iguzkiza / ACF