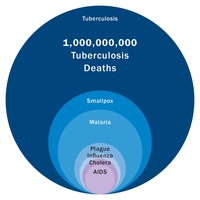 Two weeks ago, Typhoon Haiyan, one of the most powerful storms to ever make landfall, devastated the Philippines, killing more than 5,000 and displacing four million people. As emergency food, water and medical supplies are finally beginning to make their way to the typhoon's victims, the country is facing deadly infectious disease outbreaks that would be challenging for any country to control in lei of these circumstances.

Infectious diseases often create a second wave of disaster. Lack of shelter and continued bad weather are leading to widespread acute respiratory infections, which the Philippines Department of Health officials say are becoming the biggest public health threat since the typhoon. Medical authorities also worry about leptospirosis, a water-borne parasitic disease endemic to the Philippines, diseases that thrive in tropical, unsanitary environments like cholera, typhoid fever, dysentery, other infections spread through crowded evacuation centers and shelters.

While the Philippines work to save lives and rebuild communities, diseases like tuberculosis (TB) often become "opportunistic" in these situations -- taking advantage of interruptions in treatment, malnutrition, stress and weakened immune systems. According to the World Health Organization, there are more than 260,000 new cases of TB in the Philippines each year, causing more than 28,000 deaths -- averaging 75 Filipinos each day. That is more than five times as many people that have died so far in Typhoon Haiyan.

Ensuring continuity of TB treatment after natural disasters has proven difficult even in more developed countries. Interruptions in treatment for just one patient spread TB throughout a shelter in Japan after the earthquake in 2011. And, in countries with high existing TB burdens where disasters have displaced large numbers of people, TB outcomes have been much more severe. The 2010 earthquake in Haiti, the country with the highest TB burden in the western hemisphere, destroyed existing TB health infrastructure and left more than a million people living in tents, providing the perfect environment for the disease to spread. By 2012, public health experts were calling TB the biggest residual health problem in post-earthquake Haiti, predicting spikes in incidence for years to come.

In the Philippines, several TB control projects and treatment centers were located in Tacloban, the hardest-hit city in the Philippines, and while it's too soon for reports on the full extent of any damages, the destruction was so vast that the treatment regimens of most TB patients in the area were surely interrupted. The Philippines are in danger of following Haiti down the path of increased TB incidence post-disaster.

Ensuring TB treatment continuity, and keeping people out of shelters after hospitals and homes have been destroyed, is nearly impossible. Intensified efforts to diagnosis new cases of TB and ensure access to treatment is imperative to halt the immediate spread of TB. New TB vaccines that could protect those who are exposed to an infected individual and help ensure the containment of this deadly infectious disease would be transformative in the aftermath of natural disasters. Aeras and its partners around the world are urgently working to develop new TB vaccines to protect global citizens from what remains the world's deadliest infectious disease over the past 200 years (image above).