I read all my emails and texts and tweets at least twice before sending them. When I discover that I've let a typo slip through, I'm horrified. Finding one in my online dating profile would cause double the dread, as these portraits are meant to be one's best face. An embedded error suggests lack of competence, consideration, or both. And I read others' profiles in the same light. The more typos pile up, the more points I deduct.

But I'm a writer and editor--and at that I'm one who cares about things like the order of the question mark and exclamation point when combined. (Question mark first.) So maybe I'm in the minority with my typo-turnoffs. Recently I talked with my friend Spencer Greenberg, an applied mathematician and self-optimizer, about how much typos matter, and exactly how they matter. We wondered if sloppy writing might signal lower social class, and we ran a couple of quick experiments to find out.

For the first, we composed two versions of an online dating profile. One had zero typos and one had five:

I've lived in three diferent cities over the last six years. I love traveling, exercise, and reading a great book. On a Friday night, I'm equally likely to be found at home watching movies as I am to be at a bar with friends. I love listening to the Beatles, especially Abbey Road, and my current TV obsession is Game of Thrones. I like great food, and meeting new people. But my friends and family come first. I'm looking for someone with great sense of humor, who is honest, and doesnt play games. It's all about the chemistry. Let's meet an see how it goes.

Three hundred people on Amazon's Mechanical Turk read one of the two profiles and judged it as if they were single and the profile had been written by someone of the gender they found most attractive. They answered several questions on a 1-7 scale: How educated is the person? How intelligent? How high-status? How wealthy? How respected? How hard-working? How kind? How likable? How trustworthy? How friendly? How good-looking? How easy would it be for this person to get a job? How interested would you be in dating this person? Finally, they said--yes or no--whether they would go on a date with this person. (We worried that the profile was so riddled with clichés as to be unbearably insipid, but 75% of people disagreed with that assessment. I should have known. ) All measures were also combined into a "positive perception" score.

We found that typos did not have a statistically significant effect on any of the measures, even with 5 typos in about 100 words. The closest we came to significance was on the perception of education: Typos lowered it from about 3.5 to about 3.3.

This outcome surprised us. Maybe people just aren't noticing the typos, we thought. So we ran another experiment. This time, the profile was longer, about 200 words, and we included 13 typos on the flubby version:

I've lived in three diferent cities over the last six years. I lov traveling, exercise, and reading a great book. On a Friday night, I'm am equally likely to be found at home watching movies as I am to be at a bar with friends. I love listening to the Beatles, especially Abbey Road, and my current TV obssesion is Game of Thrones. My last big trip was to Mexico, where I spent all my time on the beach or eating tacos. Someday I want to check out France and finally see the eiffel Tower up close. I like great food and meeting new people. But my friends and family come first Currently I work in sales. It's alright, I guess, but I want to try something new. Something were I'm not sitting at at desk all day! I'm looking for someone with great sense of humor, who is honest, and doesnt play games. You should like animals because I've got an amazing dog named Ralph. You should also want to do something with your life, but still know where you came form. I could make a big list of what a perfect date would be like, but really Its all about the chemistry. Let's meet an see how it goes.

We also asked a few more questions, about the target and about the participants. Is the profile-writer white, black, or other? How would you rate your own socioeconomic status relative to other Americans? How negatively do you react to people making a lot of typos and spelling and grammatical mistakes? And how many mistakes do you recall seeing in the profile you read?

The people who saw 13 typos estimated that they'd seen, on average, 4.6. Based on this study, people tend not to notice most typos in dating profiles. (Unless they read actual profiles much closer than they read this one, but usually they're not told they will have to answer questions about the profile.) Still, seeing typos had a few statistically significant effects: The sloppy writer was rated as slightly less intelligent (3.0 < 3.5), educated (2.8 < 3.3), able to get a job (3.1 < 3.5), appealing as a date (2.7 < 3.3), respected (3.0 < 3.3), trustworthy, (3.2 < 3.4), likable (3.6 < 3.9), and hardworking (3.1 < 3.3). Summing all they scores, the writer was rated slightly less positively overall (40.4 < 44.0). See below for a chart of percentage reduction in ratings. (Red bars are strongly significant, orange bars are somewhat significant, and grey bars are non-significant.) People's ratings of their own social class (based on income, education, and job status) did not have much effect on their ratings of the profile writer. 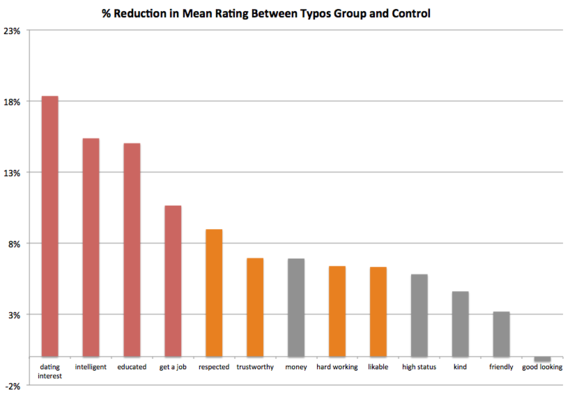 The ratio of people who said they would date the person dropped from 71% to 53%. Based on a linear regression model, it drops about 3.5% for each typo noticed. But remember that only a third of the typos were noticed. So we finally got people to react to typos, but only by adding 13 to a single paragraph, many more than I've ever seen in a real profile.

We think mistakes worse than mere typos--genuine misspellings, grammatical errors, profusions of LOL--would have effects stronger than those we found. And effects might be stronger in a resume or cover letter. But it appears that making typos in your personal profile does not significantly harm the impression you make, unless you type your profile wearing ski gloves. One possible exception is if you hope to date a writer or editor, or someone as uptight about language use as I am, but who would want to do that?

[A methodological note: To conduct this study, we used GuidedTrack, a new platform designed by Spencer that makes it easy to create your own online experiments, surveys, and training programs. The raw data are available upon request, and we welcome questions or suggestion about possible next steps.]