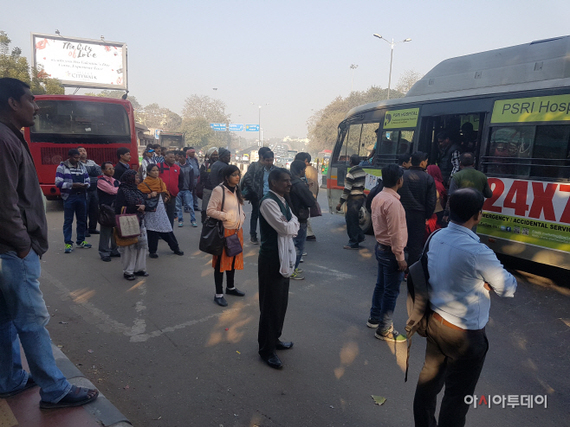 [The strike by Ola, Uber drivers entered its fifth day on Tuesday, causing discomfort to the public./ Photographed by Jeong In-seo]

The Hindustan Times and other local media outlets reported Tuesday that the protests which started in the capital New Delhi may spread to Hyderabad, Bengaluru, and Chennai.

On the previous day, a bus stop in New Delhi was crowded with people. The bus that was coming to the bus station did not stop and moved along with its door open. The passengers jumped on the running bus.

Santosh, who was about to get on the bus, said, "I think there are more people at the bus stop than usual. I can't get on the bus. It's hard to catch an auto-rickshaw."

Other passengers were in similar situations. As people were not able to call cabs through their smartphones, buses and auto-rickshaws saw increased ridership. As the passengers flocked, auto-rickshaws charged double, triple more than usual. But passengers have no choice but to use them. 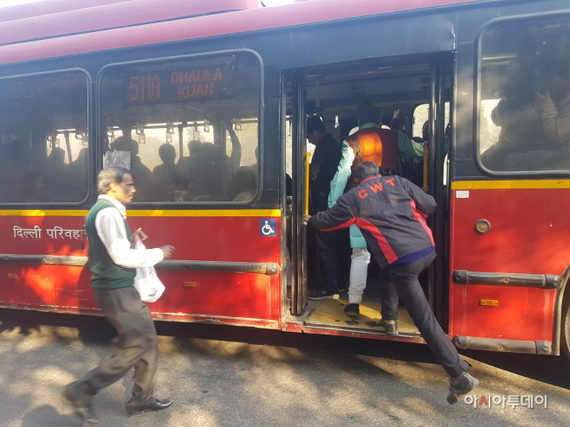 [Due to Ola-Uber strike, commuters are taking either a bus or auto-rickshaw. As there were too many people waiting at the bus stop, the bus passed with its door open. The image shows the passengers getting on the running bus./ Photographed by Jeong In-seo]

"Many taxi drivers are suffering huge losses. We are losing money, not making money," said Uber and Ola taxi officials in an interview with the Hindustan Times. They said, "We are protesting because we need support from the government in response to the increased commission rates, declining number of rides, long working hours and decreased earnings. We are working hard. But we started the strike because if we continue to lose money, there won't be hope to live in the future. We will continue until our will is delivered."

As the drivers went on strike, there are growing complaints among existing users. Reetika, 31, who routinely uses Uber to commute from Delhi to nearby Noida, has not been able to use Uber for four days. "I always used Uber to commute. But I can't get a cab now, so I take an auto-rickshaw." She added, "I don't want to go against Uber drivers who are making their voices heard. But they are causing trouble to their users because of their interests."

Korean residents are facing troubles as well. A Korean, who works in New Delhi, said, "I usually go to work using either Uber or Ola. But I took an auto-rickshaw today and yesterday." He complained, "I paid 160 rupees for a distance of 80 rupees. I've seen drivers who charge more than three times than usual." 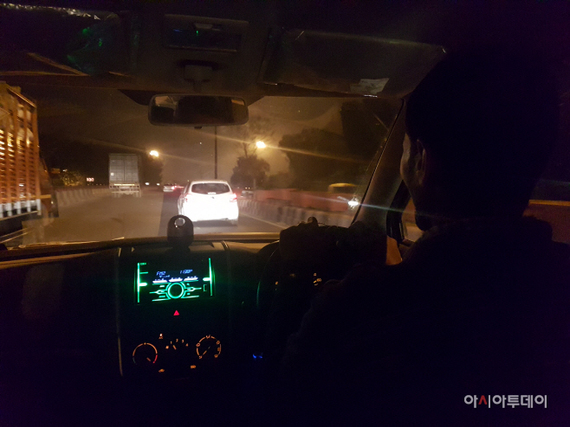 [Not all of Uber and Ola drivers went on strike. However, they were driving behind their colleagues./ Photographed by Jeong In-seo]

However, not all of Uber and Ola drivers went on strike. I was able to meet an Ola taxi driver on Monday. Asking for anonymity, he said he could be beaten if he gets caught by his colleagues because he was not going on strike. "When I work, it's hard to earn 200 rupees a day. And my boss take it from me. At first, Uber and Ola told us we could earn more than 10,000 rupees per month. But actually, it's hard to earn 2,000 rupees a month," he said. "We don't want much. We really hope to earn enough money to make living." Uber is available in 29 cities across India, while Ola is available in more than 100 Indian cities. However, as the strike may spread to other cities, public inconvenience is expected to deepen further.