As part of its worldwide domination plan, the car-hailing service Uber launched its smartphone app in Shanghai nearly two years ago. Now it’s operating in 9 Chinese cities, including, as of a year ago, Beijing.

Last week, when I went there to meet the world’s most famous artist, I was looking forward to using Uber and plugging addresses into my smartphone rather than trying to communicate them to a driver who only speaks Mandarin. When I fired up the app while there, I discovered it was different from the U.S. version I was used to. It was communist-themed: 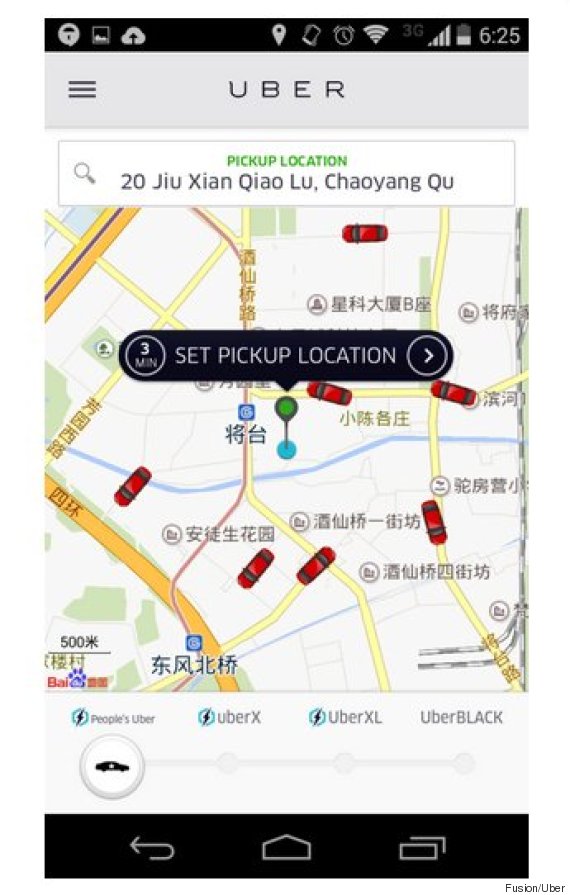 People’s Uber has a red army of cars

In addition to the usual options, there was “People’s Uber.” When the cars for each service were geolocated on a map within the app, Uber X cars were white, UberBlack cars were black, and the People’s Uber car icons were all red, in a seeming nod to the official color of communism. Riders who hail a People’s Uber have reportedly wound up in fancy cars driven by China’s nouveau riche, while paying the equivalent of an inexpensive local taxi. It’s the cheapest version of Uber with no base fare and a rate of just .20 RMB per minute (3 cents) or 1.50 RMB per kilometer (25 cents), meant to cover the driver’s cost. Minimum fare is the equivalent of $1.30.

We don’t usually associate the hyper-capitalized Uber with communism -- but People’s Uber gets pretty close. Uber spokesperson Nairi Hourdajian, who says that China “has been a strong market for Uber,” explained that it’s intended to help localize the app to the Beijing market.

“People’s Uber is non-profit ride sharing that connects private car owners with riders thru our existing platform and technology,” said Hourdajian by email. The company works with local licensed car rental companies to provide UberBLACK, UberX and UberXL, from which it does seek to turn a profit. (In my experience, there were always far more red cars available for hailing than black or white ones.)

Like McDonalds, Uber tries to cater to local tastes in some of its international locations. As Buzzfeed’s Johana Bhuiyan noted, Uber has “UberAuto” in India for calling a rickshaw and “UberAngel” in Colombia to call a driver to whom you can hand your car keys over (because drunk driving carries such stiff penalties there). Shanghai has “UberEnglish” for all those expats who want English-speaking drivers. And in the northern part of the People’s Republic of China -- in Beijing and also in nearby Tianjin -- the hyper-capitalized start-up valued at $41 billion has “People’s Uber.”

“We localize our offerings in every city around the world,” says Uber spokesperson Nairi Hourdajian. “The local team members who run that city tailor the local offerings to that city.”

I never got to try Uber’s great societal equalizer in Beijing. The one I hailed drove for 15 minutes in the wrong direction before I canceled it, but a local rider told me he loves the “People’s” option. In his last ride, he had been picked up by a guy driving a high-end Mercedes who just wanted the opportunity to chat with Westerners, the people most likely to be using the app. A Financial Times writer, who wound up in a Maserati when he called a People’s Uber, reports that Uber incentivizes People’s drivers by giving them “a bonus equivalent to as much as three times the fare.”

Despite the nod to local culture, Uber still faces headwinds in the country, with Chinese authorities’ threatening to crack down on “illegal taxis” and the merger of Uber’s two, larger, home-grown ride-sharing competitors. In December, Chongqing police reportedly raided an Uber driver training session in southwest China. Uber has attempted to navigate existing regulations by working with local, licensed car companies and making People’s Uber a non-profit operation.

“We’re in regular conversation with policymakers in China,” said Hourdajian. “We see the government progressively encouraging innovation, recognizing the value of car-hailing apps.”

Maybe they’ll recognize the value even more after hailing a Maserati on the cheap.