Something has gone wrong here.

The University of California-Davis is a "taco school" led by King Arthur, according to Google search results for "UC Davis" last week: 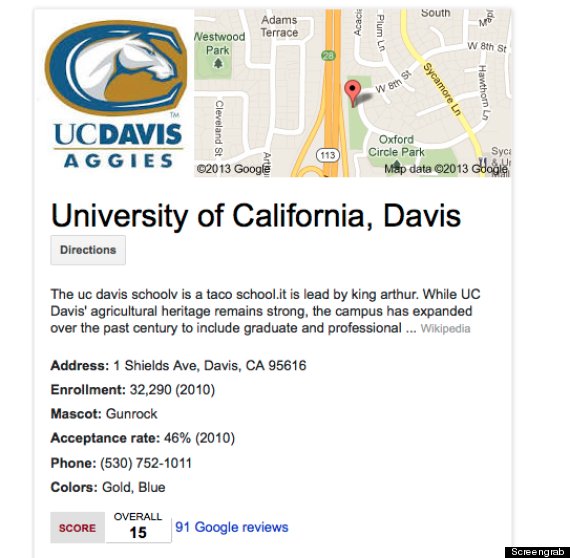 For at least all of last week, whenever someone searched "UC Davis" on Google, the Knowledge Graph, which automatically pulls information from Wikipedia, started with an obviously inaccurate line. However, a search of recent edit history for the UC Davis Wikipedia page didn't show anyone adding the "taco school" line to the page.

A spokesman for UC Davis confirmed they are not led by King Arthur and "are proud" to still have Linda P.B. Katehi serving as their chancellor.

Tom Hinds, director of marketing at UC Davis, said in an email, "Perhaps the reference to King Arthur was to celebrate our Medieval and Early Modern Studies Program?"

Hinds said he wasn't sure what to make of the reference to UC Davis as a "taco school."

"We do have great tacos on campus in multiple locations," Hinds said. "Selections on the main campus include the Vietnamese fusion tacos available from a food truck near The Silo, tacos at the Mediterranean food truck near the Robert and Margrit Mondavi Center for the Performing Arts, and more traditional-style tacos made by UC Davis Students at the Tex Mex Grill in the Memorial Union."

UC Davis requested that Google re-index the page as soon as possible. At some point over the weekend, Google fixed the search results, so things are now back to normal.