The University of California-San Diego's student humor publication, the Koala, has come under fire for its latest issue, which tries to lampoon recent racially charged events on campus.

The newest issue satirizes the demands issued by the BSU [Black Students Union] in the recent weeks, by introducing a mock program-the Coalition of Outreach and Opportunity for Negro Students, or C.O.O.N.S for short. The "program" proposes such things as "Special All Black Housing" and "Special Classes Just 4 U!" including "SOC20N: Blame it on Whitey" and "Swimming 101: It's not actually that deep!

This latest incident is the the Koala's second collision with controversy in a month. In late February, UCSD's student television channel had its funding frozen after a Koala-produced spot mocking Black History Month aired.

An excerpt from the issue, which is availabe in PDF here. 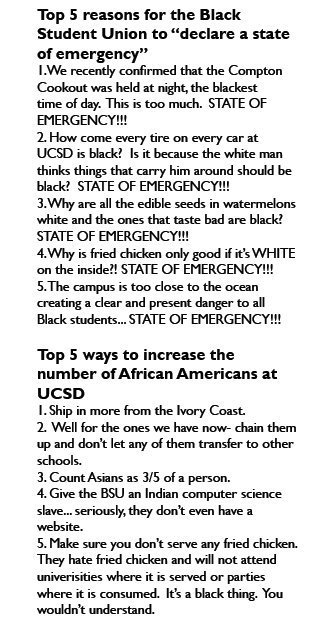 Download
Calling all HuffPost superfans!
Sign up for membership to become a founding member and help shape HuffPost's next chapter
Join HuffPost
Voting Made Easy
Register to vote and apply for an absentee ballot today
Register now
Leah Finnegan
Contributor
Suggest a correction