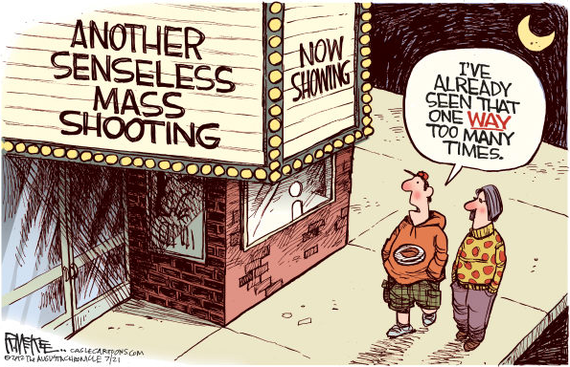 ...Intellectualization, quantification, abstractification, bureaucratization, and reification--the very characteristics of modern industrial society, when applied to people rather than to things, are not the principles of life but those of mechanics. People living in such a system become indifferent to life and even attracted to death.
--Erich Fromm

No man is an island,
Entire of itself,
Every man is a piece of the continent,
A part of the main.
--John Donne

After yet another mass shooting, this time in the college community of Isla Vista, California, the experts reached for facts and figures, those fragments that would somehow assemble a picture: how long shooter Elliot Rodger, age 22, had been in therapy; what medications he had taken, at what dosages, and when; what mental disorders had been diagnosed; when he had been interviewed by the police; what YouTube rantings he had left behind. How many rounds through how many legally purchased guns in how many minutes of domestic terror.

The failure of all this assembled data to prevent mass violence, let alone to clarify its roots, obligates us to ask whether the premises that underlie all the counting and charting are foundationally flawed. Six years of counseling violent criminals convinced me long ago that monocausal explanations for violence (was it the parents? Genetics? Bad wiring? Medication or its lack?) blind us to the depths of cultural, structural violence boxing us in on all sides.

Solutions, interventions, and fixes that take symptom for cause often push the deeper problems into the background, where, like untreated wounds, they fester until they erupt again. Like any harmful behavior, violence is symptomatic of an underlying anguish that cannot be magically diagnosed and medicated away. In fact, when applied unreflectively, such interventions serve to hide oppressive social structures long in need of replacement, and by doing so silence calls for lasting changes in actual lived conditions. Monsters and psychopaths are a great convenience to those who wish to keep things as they are.

This habit of shallow fixes and solutions represents a calamity in the name of therapy and healing. We can see its operation in the disturbing deja vu of repeated tragedies untouched by shallow explanations and endless evidence.

The latest lesson in ignored context erupts from Isla Vista ("Island View"), a gridded set of neighborhoods boxed in by straight roads aligned due west of the University of California at Santa Barbara. The famous Blacksheep Squadron of fighter pilots trained here. Before that, the native Chumash were pushed out of the largest ceremonial gathering site in Alta California to labor and wither in the nearby mission. The Marine Corps bulldozed what was left of their cemetery to build a sewage plant where Mescalitan Island had stood.

Why does this matter today? It matters because the mindset of violent conquest behind these and many other displacements and disruptions has not vanished with the passage of time. No: if anything it has gathered force. The United States, the world's largest arms dealer and staffer of military bases all around the world, has seldom known even one generation of peace. War in the U.S. is not just a Clausewitzian tool of statecraft; it is our way of life. We are as addicted to warfare as we are to the fossil fuelishness that accompanies our invasions. In flagrant violation of international law, our president, a Constitutional attorney who accepted a Nobel Peace Prize, uses un-Constitutional powers of aerial remote control to assassinate his enemies of the week without arrest or trial. Increasingly, and ironically, drones fill the skies as their winged namesakes disappear from depleted beehives.

No wonder the National Rifle Association that has bullied politicians into letting the severely mentally ill buy guns spends 46% of its annual revenue on political contributions. It works. 41% of Republicans and 23% of Democrats report owning handguns. Overall, the total comes to roughly a hundred million U.S. residents. Some buy a gun, tuck it away, and never look at it again. Some hunt. And some seem obsessed with guns and the sense of lethal power they announce. Perhaps we should call this condition gunsanity. Sobering to reflect that the word "gun" derives from Gunhilda, the Norse battle goddess charged with transporting corpses to the Underworld.

Fear and hatred of others demonstrates what psychologists call projection: not just a movie industry operation but a psychological one too in which we place our own darkness onto convenient targets. A mark of maturity appears in our capacity for seeing and owning our projections. In the impulsive fists of alienated loners, the projectors bear gunsights and the projections harden into bullets. "War" is our curt name for when projections escalate into institutionalized violence.

Gunpowdery with projection, violence and patriarchy work together. Before guns, missiles, and cannon were invented, men carried spears, knives, and other phallic weapons of penetrative domination. The most warlike cultures are also the most oppressive to women. Rape has been used for centuries as a weapon of war and conquest. ("Rape" comes from "devour" and "plunder" and shares roots with "rapid." The etymology of a word often reveals its psychological origins.)

We should not be even slightly surprised, then, by Rodgers's "war on women," as he called it, or by his virulent online trolling through "men's rights" chat groups. Not in a country in which so many American politicians still blame rape on how women dress. An entire vocal bloc of the Republican Party--call it the Elephant in the Room Constituency--normalizes such misogyny with ceaseless attacks on women's health access, women's studies programs, and women's right to equal pay, the attacks interspersed with verbal bursts of flagrant sexism and racism.

This entire misogyny-industrial complex of fear and ignorance gives implicit cultural, financial, and political permission for men to mistreat and degrade women. "I'm not so different from a lot of the guys outside the room," as more than one batterer told me in group. "My dad [brother, uncle, neighbor, boss, coworker, superior officer, drinking buddy, etc.] are also violent." "Yes," I would reply, "but you got arrested, and the fact that so many men are violent doesn't make violence right, not even when the government does it. Now let's see if you can be an influence of awakening on men who are not here in group but should be."

We did good work in those days, but it was all uphill culturally. To expect peaceful behavior from a chronically violent culture infected over and over with well-subsidized gunsanity is like expecting to grow natural potatoes in a field surrounded by GMO crops. We planted seeds anyway.

Gunsanity is locally as well as nationally felt. A large chunk of the Californian economy has depended on war industry output since WW II. Every other Hollywood movie poster shows a young male pointing a gun. Santa Barbara got its name from the patron of artillery. College freshman David Attias perpetrated the first Isla Vista mass attack when he got into his car in 2001 and ran over four students on Sabado Tarde Road. This self-proclaimed "Angel of Death" was, like Rodgers, the son of a Hollywood director. In April of this year a riot resulted in crowds of young people pelting police with bottles and other objects. Fortunately, nobody brought guns.

According to the Santa Barbara County Sheriff's Office, sexual assaults are "not uncommon" here, where three brutal gang rapes prompted UCSB to send out a text warning women about walking around alone at night.

It is perhaps a stretch to refer to Isla Vista as a community, although it has tried to be. It used to be a sanctuary for rock bands getting on their creative feet, but in 2012, their practice hangouts on Seville Road were bulldozed to make room for luxury student housing complexes. Boxy suburban neighborhoods packed with restless young people offer them little besides fast food, a big-box mall and pricey boutiques. One eatery there is named Dejavu.

Taken together, all of this--political cowardice and shallowness, continual warfare and glorified militarization, saturation by TV and movie images of supposedly heroic violence, easy availability of guns, widespread objectification of women, commodification of every sector of life, or rather of existence--sets the psychological stage for the unstable minds who lose it and open fire. For every one of them, a hundred hopeless and entitled loners fantasize about pointing a pistol out the window of a BMW and pulling the trigger.

--And so the experts go on collecting shell casings and pharmacy prescriptions and wonder what went wrong inside the shooters if not inside their deeply troubled country.

Where, we might finally ask, are the cultural therapists who see beyond monocausal explanations and stripmall-signage diagnostics to the fire gathering heat from below? Where are the strong, wise, and peaceful male role models who can show young men how to hold their fire? How many more tearful, shattered victims' families must confront our apathy? And who will remind us that women can never feel truly safe in a nation in which entitled, hate-peddling bullies can hurl sexist insults without suffering a tangible consequence?

A reckless, armed, and affluent loner: that is how our country looks to those we invade and exploit. In the mirror of honest collective self-reflection we recognize at last a self-destructive gunman who believes he is an island. That recognition could be the start of healing, reconnecting, and maturing him before he kills again.