When the Calbuco volcano erupted Wednesday after being dormant for 40 years, it threw a lot of ash and smoke into the air.

It also may have attracted a UFO.

Photos and videos of the blast show a mysterious glowing craft hovering in mid-air near the eruption before disappearing.

Ana Luisa Cid uploaded a video of the alleged UFO to YouTube, describing it as "Luminous object near the plume, captured on 22 April 2015." She added, "Some believe it may be a drone or a police helicopter. What is striking, in my opinion, is that the object remained static, then vanished. Optical illusion?"

The flying object remains unidentified, but UFO researcher Marc Dantonio, believes it most likely is a drone.

Dantonio, of FX Models, previously created a "UFO" drone for a National Geographic special and is the chief photo and video analyst for the Mutual UFO Network. 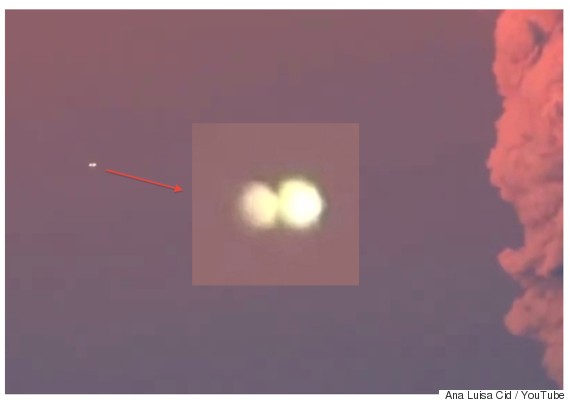 When Dantonio first looked at Cid's video, he considered that the two-sphere object in question might have been a simple CGI effect, added to the volcano video.

But, after looking at other videos of the same eruption event, he's changed his opinion.

"In at least one video of this eruption, you can see what I have identified as a definite drone," Dantonio told The Huffington Post in an email. "It appears to be a Phantom 2 drone, based on the lighting pattern. This drone was captured by several witnesses in a video compilation of five different videos of 'the UFO.'

"In the compilation of those five videos, there is one that shows the two-sphere object from a different perspective and this new perspective indicates that the object/drone was far closer to the observers than to the volcano. I believe it was launched in the town and brought up to altitude where it held station to observe the ash plume."

Dantonio's assessment: "We are looking at a drone that is relatively high and nearby, and the drone pilot is capturing video of the ash plume."

Although Dantonio's explanation is plausible, UFO sightings are fairly common in Chile.

Last August, the country's Committee for the Studies of Anomalous Aerial Phenomena (CEFAA) held a meeting about whether unidentified aerial phenomena (UAP) pose any danger to civilian and military air operations.

The official verdict was the UFOs don't represent a danger, according to UFO researcher and HuffPost blogger Leslie Kean.

It's not unusual to see UFO volcanoes, either.

In January, a webcam captured an object resembling a flying horse hovering near the erupting Colima volcano in Mexico, the Tech Times reported.

In May, 2013, a person videotaped a UFO seeming to enter Mexico's Popocatepetl volcano, though at least one expert believed it was a commercial aircraft.