Many do not realize that for several decades the United States took UFO reports very seriously. In fact, it was the Air Force that coined the term UFO in the first place. Furthermore, there are several governments around the world who still take UFO reports very seriously and continue to investigate them in an official capacity. All of these government-sponsored UFO investigations have been documented like never before in the new book UFOs and Government: A Historical Inquiry.

The cover of the book says it is a history of government UFO investigations "from the perspectives of the governments themselves." That is because the authors have undergone years of painstaking research, unearthing hundreds of official government documents from government and university archives chronicling the manner in which government agencies went about tackling the UFO phenomenon and why they even bothered. 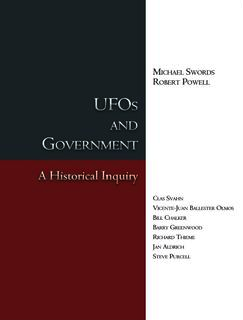 The book begins during World War II when many Allied pilots in the European campaign reported witnessing balls of light following their aircraft and eventually flying off at great speeds. They were dubbed "Foo Fighters." After the war the military inquired of the Germans and Russians as to what these Foo Fighters were. Their response was that they had also witnessed the mysterious balls of light, and had assumed them to be secret weapons of the United States. Thus began over two decades of investigation as to what these unidentified flying objects were and whether or not they posed a threat.

Reports of UFOs of varying shapes and sizes increased steadily into the 50s. After sightings over Washington, D.C., President Truman tasked the CIA to look into the matter. They convened the Robertson Panel, which determined that the phenomenon did not pose a direct threat; however, they did worry that it could pose a psychological threat that could be exploited by the Russians.

Over half of the humongous 600 page, 8 1/2 by 11" book reviews hundreds of files demonstrating the serious nature in which every branch of the United States military, the CIA and the FBI took into investigating the flood of UFO reports coming in from the public, the military and even law enforcement personnel.

Eventually, due to the conclusions of an independent panel of investigators in 1969 with the University of Colorado, commissioned by the Air Force, official UFO investigations in the United States ended. The panel concluded that there was no scientific benefit to the study of UFOs. However, the authors dedicate a chapter to UFO investigation that took place post-1969, demonstrating that there have been a number of important sightings that the Air Force could not ignore.

One of these incredible events took place over two days at Loring Air Force base in Maine in October 1975. The first day's event was in the evening when security police saw a craft with red blinking lights fly in and then began circling the base. It came within 300 yards of a nuclear storage area and was tracked on radar before disappearing. It was thought at the time that it could have been a wayward helicopter. However, it apparently returned the next night. This time the crew of a B-52 bomber reported seeing a large football shaped object the length of four cars.

Although the United States ended its official investigations, other countries have continued to research the issue. News of the British Ministry of Defence's official UFO Desk closing has made headlines recently. However, the best example of a strong scientific effort has been France's GEIPAN, an organization that works with the National Center of Space Sciences (CNES), the French version of NASA. They post their findings on their website. A couple of their landmark cases include alleged UFO landings in which they felt the evidence supported witness testimony. In one of these cases laboratories found strange effects to the chlorophyll in plants removed from a circular depression where the alleged UFO had reportedly landed. They theorized the effect was a result of an electromagnetic field.

I asked co-author Robert Powell why he felt this book is important. He told me:

Several of the authors, I would say, have spent 30 to 40 years of their life thoroughly investigating this phenomenon. These aren't people who are jumping to conclusions. We don't talk about aliens; we don't talk about necessarily what's the cause. We talk about how the government reacted to the phenomenon, and it's a real reaction. It's a serious reaction, and this reaction probably still goes on today, but not in an open forum as it used to do.

This book is a hallmark piece of work that people curious about the UFO phenomenon, whether they be skeptics or convinced that UFOs pose a real mystery, need to read. It documents the government's involvement in UFO research in a way that has never been done before.