There was a time when UFO conventions or seminars only drew the lunatic fringe audience -- those who believe benevolent extraterrestrial beings are watching over us, to make sure Mankind doesn't destroy itself through warfare and bad decisions affecting planetary climate.

At the recent 21st annual 2012 International UFO Congress near Scottsdale, Ariz., there was certainly some of that purchase-an-ET-trinket mentality.

But during my visit, I observed something else more telling: not everyone present was a UFO fanatic.

Under the well tuned guiding arm of Open Minds Production, the IUFOC was truly an international event as nearly 2000 folks from around the world attended the six-day festivities.

I've been to other UFO conventions that catered to the out-of-this-world element, but was impressed with several aspects of this event.

Skepticism was welcome here. There was arch skeptic Robert Sheaffer's daily critical observations as he wandered in and out of the main speakers and vendors rooms.

In my own presentation, I urged the audience not to believe every UFO item they hear about on the news, in magazines and, especially, online. 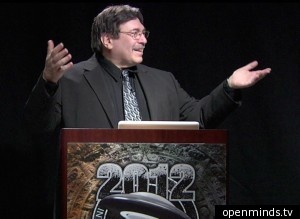 What surprised me the most throughout the event were the many folks who came up to me to say how skeptical they are about most flying saucer stories and sought my advice on where to get better, more critical information about it -- and these were people who were already believers to some extent and who wanted to share their own personal encounters.

While many of the topics addressed at the IUFOC -- UFOs, cattle mutilations, alien abductions, alien implants, government conspiracies, 2012 predictions and crop circles -- border on what mainstream media refers to as fringe, there were numerous moments where skepticism filled the air.

Ben Hansen's presentation of how the media interacts with technology to add to the confusion of what's real and what's hoaxed was a key moment. Hansen is one of the stars of the SyFy Channel's "Fact or Faked: Paranormal Files," and he comes at this whole UFO subject showing how technology can often get in the way of the truth.

It was refreshing to see Bryce Zabel -- former chairman of the Academy of Television Arts and Sciences and CNN correspondent -- give his take on what may happen after the powers-that-be finally acknowledge that some UFOs may turn out to be ET visitors. I was very happy to share the stage with Hansen and Zabel on a panel discussing UFOs and mass media.

Whitley Strieber, author of the 1987 New York Times No. 1 non-fiction bestseller "Communion," and his wife Anne spoke about his efforts to try and understand his close encounter with "intelligent non-humans" and their catalogue of thousands of witness accounts. To this day, Strieber approaches his story with a skeptical mind set. 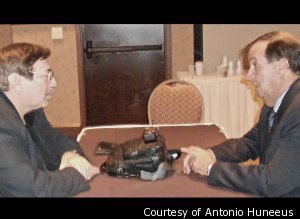 If total credibility was on the plate at the IUFOC -- and shouldn't it have been? -- I opted for the appearance of Chilean Air Force General (Ret.) Ricardo Bermudez, director of the Committee of Studies of Anomalous Aerial Phenomena (or CEFAA), Chile's official UFO research organization. (At right, Bermudez and I chat about his desire to bring the UFO subject to the United Nations.)

A former fighter pilot, Bermudez now leads a group of scientists and aviation experts who are trying to get to the bottom of numerous UFO reports in Chile. Some of the recordings he played of actual sightings by pilots and air traffic controllers were riveting.

Credibility is of utmost importance when dealing with a subject like UFOs.

When I repeatedly ask people, "Who do you believe?" I'm not just referring to the news media for its often fact-less reporting. I also target those who proclaim that the space brothers and sisters are here, walking among us.

Many of these true believers, who hope to buy a one-way ticket onto some Pleiades-bound spaceship, feel the need to sell books and ET jewelry, supposedly in the hope of unifying Earthlings to welcome their space brethren. 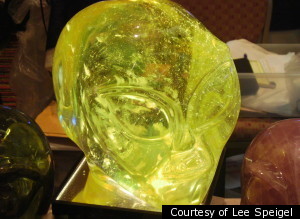 I also notice that many UFO convention visitors don't want to be in the same room with skeptics.

Isn't it time for the UFO community to begin to modify its view on this? Skepticism should be embraced rather than shunned or hated. Those who think that some UFOs are visitors from other worlds or dimensions need to work a little harder to get the non-believers to bend.

Unless, of course, some convention vendors of alien gifts are only in it for the money.

If more skeptics were welcomed at UFO conferences, it might elevate these events to higher newsworthy positions on television news programs.

What I would ask of the skeptics is to think twice before debunking or ridiculing UFO eyewitnesses to the point of where lives may be ruined because people dare to speak out and report UFO encounters.

At the IUFOC, I was completely overwhelmed and more than humbled when honored with the Researcher of the Year award. (I'm with Open Minds producer Jason McClellan below.)

Of course, it wouldn't have been possible without the support of the Huffington Post Media Group, who trust me to bring some needed credibility to the whole UFO issue. 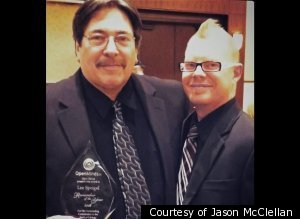 A Lifetime Achievement award was given to Colin Andrews, the man who coined the term "crop circle" in the mid-1980s.

The IUFOC also included a film festival awards ceremony and the first Spanish UFO panel, which drew about 300 people.

Local network news affiliates covered the IUFOC, and it would be great if future conventions could attract more media outlets. Because there's often newsworthy information that can come out of such an event, it would be a shame to miss it because of any fringe elements that might discourage such coverage.

Some personal standouts at the convention included Clifford Clift, the departing director of the Mutual UFO Network; filmmaker Christopher Garetano, whose well-crafted "Montauk Chronicles" was a finalist at the film festival; Antonio Huneeus, who spoke on the best UFO cases from ancient times to 2012; and catching up with Paola Harris, who's prepping for her upcoming Women's UFO Symposium in Texas.

The excellent master of ceremonies for the event, Alejandro Rojas, used the right amount of authority and wit to keep the presentations moving along. And the entire Open Minds organization is to be commended for an amazing job behind the scenes.

I would be remiss if I didn't thank John, Angela, Maureen, Tom, Jason, Heather, Michael, Dakota, and of course, Lorraine.