• In 1986, a Japan Airlines pilot saw what he described as an unidentified flying object over Alaska closely tailing his 747. He made an evasive move. His career was thrown into turmoil, but he never recanted what he claimed he saw.

• In 1987, a Federal Aviation Administration executive says the CIA warned him not to talk about UFOs because the public would panic.

• In 1997, former Arizona Gov. Fife Symington mocked thousands of people who said they saw mysterious lights over Phoenix, calling out a staffer dressed in a cheesy ET costume at a press conference. Ten years later, he apologized for lying to the media and the public.

What these events have in common is that they are unveiled on a new two-hour History Channel special, "Secret Access: UFOs On The Record," that features in-depth accounts from people who have been willing to risk their jobs and reputations to speak out about their remarkable experiences with UFOs.

"The theme of the program is that UFOs exist, but there's a small percentage of sightings that are significant and haven't been explained," said Leslie Kean, author of The New York Times bestseller UFOs: Generals, Pilots and Government Officials Go On The Record, which forms the basis of the History Channel special.

Here's a collection of images that Leslie Kean put together for The Huffington Post on Aug. 23, 2010, to promote the publication of her book:

"There is a phenomenon here and there are many high level officials, including pilots and government people, who have been involved with it and who stand behind the existence of UFOs.

"We make the point that we don't know what they are and that there are a significant number of cases that need to be studied further," Kean told The Huffington Post.

One compelling case presented in "Secret Access," which has become known as the Rendlesham Forest incident, involved more than 50 military eyewitnesses stationed at the joint U.S. Air Force/NATO bases, Bentwaters and Woodbridge, in Suffolk in 1980.

As the incident unfolded, numerous UFOs of various shapes and sizes appeared near the bases, according to a voice recording of deputy base commander, Lt. Col. Charles Halt during the event.

"This was something of intelligent control beyond any technology we know," Halt told this reporter several months ago. "It's my firm belief that it was extraterrestrial or from a different dimension."

Then there's the remarkable case involving former Arizona Gov. Fife Symington, which began on the night of March 13, 1997, when crowds of citizens reported gigantic, silent craft moving around in the skies around Phoenix and which took off silently at blazing speeds. Witnesses included police officers, pilots, military personnel and -- as was finally revealed 10 years later -- Symington himself.

The two-term governor was at home, watching television when news came on announcing UFO reports in the nearby area. Symington's security detail had gone for the day, and he decided to get into his car alone and check it out.

"I was expecting to see something in the distance, but was awestruck when this thing went overhead. It was moving steadily and quietly," he told The Huffington Post.

Symington's description of the huge boomerang-shaped craft matched many others who also reported it that night.

After three months of local media coverage, the Arizona sightings finally hit the national airwaves and were dubbed the "Phoenix Lights." With growing public demand for an explanation, Symington -- still tight-lipped about his own sighting -- held a national press conference that would haunt him for years.

Claiming to have the culprit responsible for the Phoenix Lights, the governor introduced his chief of staff dressed as an alien and wearing handcuffs. As his staffer was unmasked, Symington told the press,"This just goes to show that you guys are entirely too serious."

Ten years after his phony alien stunt, Symington finally fessed up about his own dramatic 1997 Phoenix sighting.

"Well, I was confronted by good citizens who were really upset with me, and I didn't realize the depth of their anger. It just really bothered my conscience, so I felt I really needed to square with the truth and that's what I did."

"I think if you hold a high public office, that the minute you start talking about UFOs or extraterrestrials or anything of that nature, the media immediately tees off and ridicules it. I often refer to the media culture in our country as the culture of ridicule.

"Secret Access" isn't the first UFO program presented by the History Channel, according to Julian Hobbs, vice president of development and production.

"History doesn't necessarily believe or disbelieve in UFOs. In this case, what really caught our eye about Leslie's book was this idea that 95 percent of all UFO sightings can be pretty easily dismissed -- it's the 5 percent in which you have literally governors, military officials, pilots -- people normally considered to be level-headed, sane and credible," Hobbs told The Huffington Post.

"There wouldn't be the film without the book. When I read Leslie's book, on which the film is based, it changed my opinion about the fact that I think it's worth further investigation into these phenomena," Hobbs added.

Kean, herself, is optimistic about potential contact with extraterrestrials.

"I would hope that they are benign visitors from other planets -- that they would be something that could in some way benefit our own struggle on this planet," Kean said. "Even if we knew that we were not alone in the universe, somehow that knowledge alone could affect how we perceive ourselves and maybe affect the future of our civilization."

And Symington is much more outspoken on the subject now than he was while governor of Arizona.

"I know what I saw. To me, there's no question that we've experienced extraterrestrial visits and civilizations that are far more advanced than we are," he suggested.

"I don't approach it from a fearful standpoint. I actually like to think that we're not alone in the universe, and I'm not bashful on the subject. I think we're dealing with some fascinating unknowns and someday, the truth will out."

History Channel Puts The Strongest UFO Evidence Under The Microscope
UFOs: Generals, Pilots, And Government Officials Go On The Record 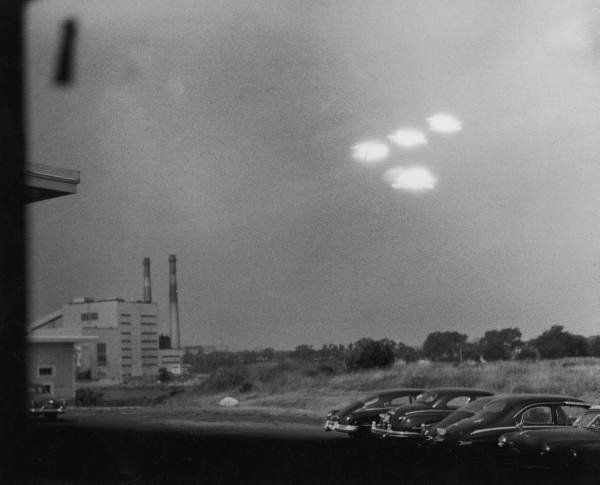