A BBC film crew was detained after it breached the back gate of the top secret military facility known as Area 51 while filming a new documentary about UFO conspiracy theories.

During the incident in the Nevada desert, a camouflage-dressed guard carrying an M-16 told a member of the British team, "We could make you disappear and your body will never be found," according to a crew member.

What exactly happened after guards thwarted the documentarians at the Nevada Air Force base is under debate. The film crew members alleged they were forced to lie on the ground at gunpoint for hours while law enforcement decided what to do. The local sheriff, who dispatched several officers to the scene, denies this account, saying the trespassers were dealt with swiftly. 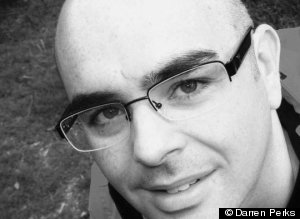 The chain of events at what's officially called Nellis Air Force Base unfolded May 14 but details are only now surfacing, likely to promote the hour-long special, "Conspiracy Road Trip: UFOs," premiering on the BBC Monday night.

Darren Perks, pictured at right, a respected UFO investigator in the United Kingdom and a regular blogger for The Huffington Post United Kingdom, and 11 others were driving a bus to different locations between Hollywood and the Nevada desert, stopping along the way to talk to people about possible UFO conspiracies. 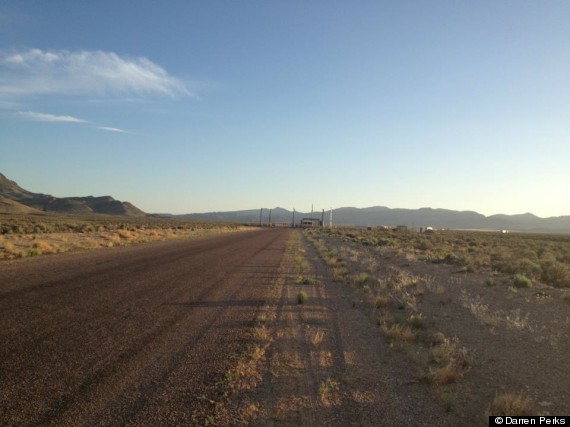 They arrived at the Area 51 rear gate, pictured above, in the late afternoon. The filmmakers saw a small building that housed the security guards, but couldn't see anyone. "We could have drove the bus through those gates and there was nobody around," Perks exclusively told The Huffington Post.

"That's not exactly what happened, but it's close," said Lincoln County Sheriff Kerry Lee. "The guards were aware that they were there -- they were watching them and had already made phone calls."

"It's not the kind of place where, if a guard sees you standing by the fence, that he runs out with an M-16. They don't normally approach people, because people drive there often to see what the gate to this facility looks like, They see the well-marked boundary and sometimes decide to go a little farther and test the waters a little too far," Lee said.

Lee confirmed that Perks and the rest of the film group didn't actually sneak onto the base. The guards didn't want to take action until the group reached an area that the guards considered unsafe, he said. 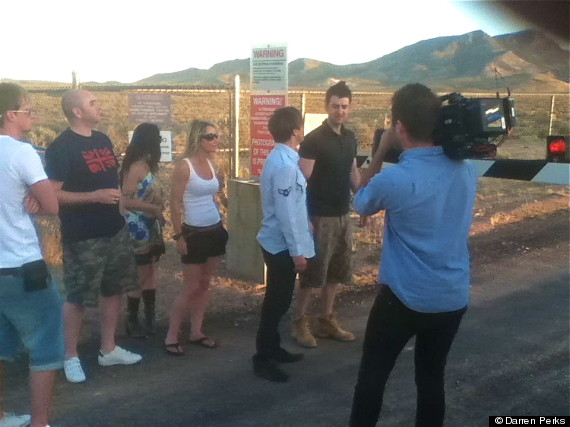 "We walked onto the base in plain view, and in so doing, we breached the security gate," Perks said. "We went past the boundaries by at least 200 yards, and after another 30 minutes of filming, one of the cameramen went over and knocked on the door [where the security guards were].

"Eight guards wearing combat fatigues immediately came out with their assault rifles and they grabbed us, forced us to the ground and we were all made to lie facedown in a row on the tarmac with a gun at our back."

The drama continued as their film equipment, microphones, wallets and phones were seized, and Perks adamantly states that they were all lying there next to each other "on the ground for a solid three hours, and they stood there with the guns at our backs the whole time until the sheriff came."

The Lincoln County sheriff agreed with most of the scenario described by Perks.

"Will I dispute that they were probably laid on the ground? Absolutely not! Was that deserving? Absolutely!" Lee said. "When you have 12 people come as a group, we don't know what to expect. What are these guys' intentions? Do they have weapons? Who knows? They were laid on the ground -- that doesn't surprise me a bit, and if we would've been there, we'd have done the same thing."

But the sheriff denies that the group was forced to lie facedown for three hours.

Lee also said that the documentary crew had to be aware that its actions might have resulted in multiple arrests.

"Come on, it says right on the signs: 'Trespassing Illegal.' Listen, they broke the law, plain and simple. It's a misdemeanor and we have to deal with it just as if they trespassed onto your personal property and you had trespassing signs." 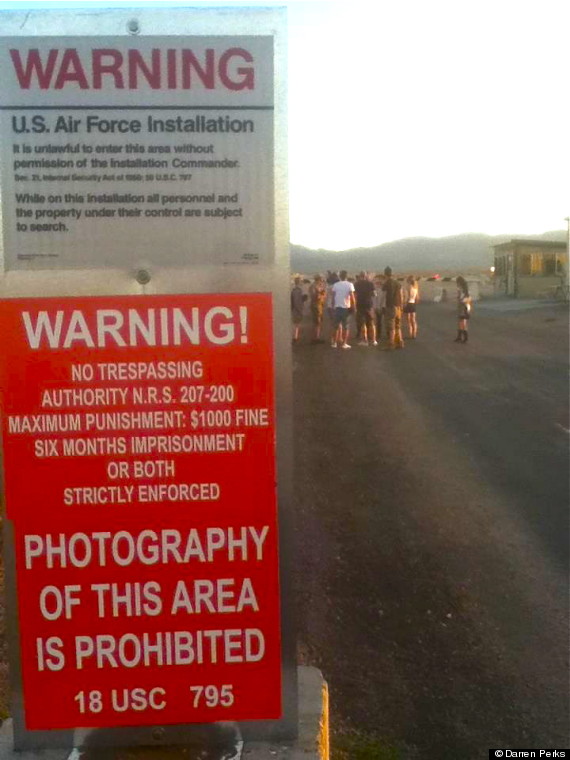 The sheriff told HuffPost that his men removed the film crew from the trespassed area, "brought them back out onto the public road, interviewed all of them, and in lieu of arresting 12 people and transporting them to jail -- which is probably close to 100 miles away -- we issued citations to those individuals."

When the situation began to wind down after several hours, Perks said he felt comfortable enough to engage a security guard in conversation. "I asked one of the guards if he'd ever seen any UFOs around here, and he said, 'You know I can't answer that question.' So I said to him, 'But we're at Area 51 and I've seen how you guys operate,' and he said to me, 'Son, we could make you disappear and your body will never be found.'"

According to Perks, another guard said, "If any of you had kept going, we would have shot you."

In the end, the film crew members were fined about $600 for "Trespass of Military Installation."

"There was no real arrest," said Lee. "They were detained. Were they free to go? Absolutely not. They were not free to go because we were conducting an investigation. Were they temporarily arrested? Yes, but they were released in lieu of a citation, which they took care of through the justice court after appearing before a judge."

A couple of months after the May incident, the production company's tapes were returned by the Lincoln County Sheriff's office. But Perks said that the portions of the tapes filmed at the Area 51 gate were wiped clean, leaving the rest of the footage intact.

For decades, UFO conspiracy activists have promoted the idea that the U.S. military was using a secret facility in Nevada -- rumored to be called Area 51 -- to study captured alien spacecraft. These rumors caught fire after many eyewitnesses reported unexplained aircraft around a top secret base, north of Las Vegas.

It's now widely known that secret military spy planes have been developed and tested in and around this region, generally referred to as Area 51. To keep unauthorized visitors out of the region, many large, threatening signs are posted at the gates leading to the heart of the base.

"We went to the Area 51 boundary, specifically to film at that location. We also made a collective decision to walk onto the restricted area and continue filming," said Perks.

Perks said he is sorry about the incident, the result of an overzealous attempt to capture something unusual on film at the legendary Area 51.

"It was a wrong thing that we did, and there will be a lot of people in the States that don't like it. The thing is, it happened, it wasn't staged or set up. We went there to film and overstepped the mark -- we went a bit too far."