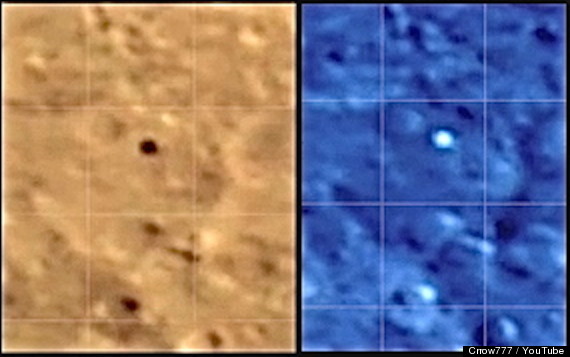 (In the middle of the 600 percent zoomed-in composite image above, a dark, circular object moves across the moon. On the left is a normal view and at right, an invert color enhancement. Credit: Crrow777 / YouTube)

In early October, Crow Tripplehorn -- a frequent moon observer who shoots high definition videos through an 8-inch telescope -- captured intriguing footage of a seemingly unusual object flying above the lunar surface, according to Examiner.com.

On Tripplehorn's YouTube page, he pledges to "never run deceptive or misleading clips on this channel. I strive to shoot the highest quality UFO and anomaly footage possible with the equipment at my disposal."

Watch this video shot by Tripplehorn of the UFO.

The International Business Times reports that Tripplehorn posted two video segments, and he speculates that the unusual object doesn't move in a straight line -- a normal characteristic of a satellite orbiting Earth.

Many videos have been posted to YouTube claiming to show a UFO or groups of UFOs flying across the moon. But what are we looking at?

To be sure, any object in the sky that cannot be identified could be considered a UFO. But something that looks like a spaceship might actually be a weather anomaly -- or merely a hoax. The possibilities are endless.

"I see nothing to indicate that the object was computer generated. Having said that, the video also lacks anything that would have me believe the object is something other than a conventional satellite," said former FBI Special Agent Ben Hansen.

"The sun's reflection off the moon backlights the object, and we would expect it to look silhouetted, which it does," Hansen told HuffPost in an email. "Regarding the 'halo' light the videographer mentions, a video artifact called 'pixel bleed'or 'color bleed' is quite common, especially when the video is compressed in editing. The result is more noticeable with magnification and appears as if the edges of objects are blurry or extend beyond the boundaries of each pixel."

Marc Dantonio, of FX Models, agrees with Hansen's description of 'pixel bleed.' "I call it compression artifacting, but it amounts to the same thing: You get a halo around the object."

"I approached this from a different point of view," said Dantonio, photo and video analyst for the Mutual UFO Network. "I measured a set distance that the object traveled across the face of the moon and calculated how long it would take it to traverse the full moon. From that timing and distance, the orbital period is exactly half of the orbital period for geostationary satellites, which stay over the same location on Earth because they orbit Earth at the exact rate of the planet's rotation.

"The satellite caught in this video clearly is at the halfway point to geostationary, so it is out around 11,100 miles above the equator, and it is dark because of the silhouette effect of the bright moon while the satellite is in Earth's shadow."

But, in this next video segment, Tripplehorn attempts to show how another alleged UFO doesn't move in an entirely straight line.

Hansen and Dantonio are still unconvinced this is something truly unexplained.

"I'm not sure yet that [Tripplehorn] has made the case that it's changing direction," Hansen said. "When Earth is moving away from orbiting objects, it can look like they're on an elliptical path, but they're not. There's definitely some atmospheric distortion at play. Show me a 20 or 30-degree turn and we may have something."

"We see a similar case of what is likely another satellite," added Dantonio. "That wavering [Tripplehorn] is calling out could be due to several things. One is that this is a slowly tumbling object, like an old rocket booster, for instance. If so, it may make the path appear to waver, but it would still travel in a straight line. Either way, I am leaning toward this being another ordinary satellite."

UPDATE: After this article was first published, videographer Crow Tripplehorn sent a new video to The Huffington Post, offering his response to our story. His response is posted here.