The quiet of a rural strip mall in Connecticut is suddenly interrupted by the appearance in the sky of a glowing blue-green disk. Shoppers stop in their tracks, staring at the unexplained craft moving up and down, back and forth.

But it's all a hoax, a very clever ruse concocted by Marc Dantonio, the chief photo and video analyst for the Mutual UFO Network.

And he did it for a very specific reason for a National Geographic Channel special, called "The Truth Behind: UFOs," airing this month.

"They wanted me to do some image analysis, and when they said they were looking for some dramatic videos to kick it up a notch, I suggested to them that I could create a functional UFO that we can actually fly," Dantonio told The Huffington Post.

Dantonio knows a thing or two about building sophisticated working models. His Connecticut-based company, FX Models, creates special effects for the History Channel and the Learning Channel, and has contracts with the U.S. Navy, Congress and the Joint Chiefs of Staff in Washington, D.C.

So Dantonio set up his UFO hoax at a mall in Winsted, Conn. To do it just right for the National Geographic cameras, he launched three separate nine-minute flights.

"They used several main cameras -- one to gauge crowd reaction -- but they wanted to film it in ways that didn't look obtrusive," he said.

"Our point was to illustrate that technology can cause confusion, and we succeeded. And after we flew it, we totally exposed the technology so people could see exactly what we did," said Dantonio. 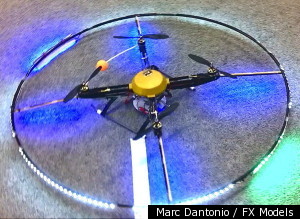 What he and his company created was a "quadcopter" with a 4-foot circumference and an X-shaped configuration that had motorized propellers at each end of the X (pictured at right). Several inches beyond the propellers was a big circle of lights.

"My mission was to try and build a vehicle that would be big enough to be seen from a great distance, but small enough such that I wouldn't need exorbitant power requirements to get it up into the air," Dantonio explained.

"We flew it out from a big field behind the mall and then shot it vertically up and maneuvered it around, [and then] dropped it down to a lower altitude and shut off the lights on it. Then we rocketed the thing up in the air about 800 feet and turned the lights back on."

Numerous people said it looked like it vanished from one spot and reappeared in another -- a typical UFO eyewitness account.

"We wanted to hit that UFO myth and show how it can be accomplished with technology," Dantonio added.

The overall point of this little UFO charade was to help people report UFOs in a way that better separates the truly unknown aerial objects from those that are easily explained.

"With the number of people who have recorded UFOs with their cellphones, there's a much higher likelihood they're going to capture objects in the sky. But not all of these things are true unidentified flying objects," said Dantonio.

"My main tenet of doing this production was to show how there's existing technology that can fool you into thinking you're seeing a real UFO," he said. "The more people are educated, that's the way we're going to find a real UFO someday."