A family in Scotland was amazed to see a glowing unidentified flying object hovering in the sky in the middle of the night above their rural home -- and it stayed there for hours.

Morag Ritchie first noticed the odd, flickering and rotating lights when she woke up around 2 a.m. early Saturday.

"I saw what I thought was a bright star," Ritchie told BBC Scotland. "However, it was a sequence of flashing lights. There was also a darting light coming from the side. There was no sound, either."

Watch the video of the UFO that hovered over the family's house for several hours:

Ritchie woke her family up and they all watched as a continuous moving stream of lights blinked in and out and around the strange object that reportedly remained in this location for several hours near their Fraserburgh, Aberdeenshire home.

"I just woke up all of a sudden and looked out of the window to see all these twinkling lights -- they looked like they were moving," Ritchie said, according to Yahoo News U.K.

As the unusual object just hung there silently, sometimes revealing as many as five individual lights turning on and off around its perimeter, the family captured its movements on video. 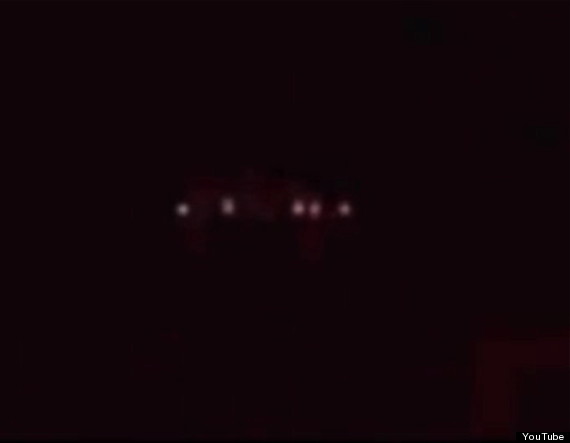 "My husband is a fisherman and he's spent many hours looking up at the night sky, so he was quite skeptical when I told him, but even he admitted it was strange," said Ritchie.

The video reveals, and Ritchie reported that, "occasionally, something shot off to the side. I kept going back to my bed but I was so unsettled that I continued waking up," according to STV Local.

The sighting lasted several hours, and by daylight, the mystery object was gone.

STV Local also reported that a Civil Aviation Authority spokesman, Richard Taylor, said, "We have no way of knowing what aircrafts were around that area at that time.

"There was a lot of activity with the northern lights -- the natural phenomenon -- wouldn't that be a more feasible explanation than an aircraft or UFO? If it was an aircraft, it would have been military," said Taylor.

Check out more UFO videos from around the world: