Ongoing pro-democracy protests in Hong Kong have drawn tens of thousands of citizens, taking to the streets, demonstrating their opposition to news that China will choose the candidates for the upcoming 2017 election.

During one of those protests, the crowd got a little something extra as a brightly lit object appeared in the sky above the throng, moving slowly at first and then, as the BBC caught it on camera, the UFO suddenly shot up in the air out of sight.

A television viewer in Scotland watched the demonstration news coverage and recorded the broadcast. When he saw the object in the sky, he later sent the video to a local news outlet, the Hamilton Advertiser, according to OpenMinds.TV.

Watch this video of the alleged UFO in the sky above Hong Kong:

The aerial object first appears on the left side of the screen, descends in front of a building, and moves to the right toward another tall building where it stops and hovers. Then, with an almost visible burst of energy, it suddenly launches straight up in the air.

Was this object truly extraordinary or does it have a more prosaic explanation?

"I don't think it's too far fetched to believe it is a drone. Maybe one that's closer to the camera than we think," said Ben Hansen, former lead investigator of the Syfy Channel's "Fact or Faked: Paranormal Files" TV series.

"The lighting set-up is a bit strange, but it could look like one solid light because of the distance," Hansen told HuffPost in an email. "When these things want to go straight up, they can cruise really fast. The way it sort of wobbled or floated as it settled by the building makes me think it could be a drone."

When the object first appeared on the left side of the video, it didn't seem to emerge from behind a building. Instead, as seen in the composite image below, it's in front of the building. 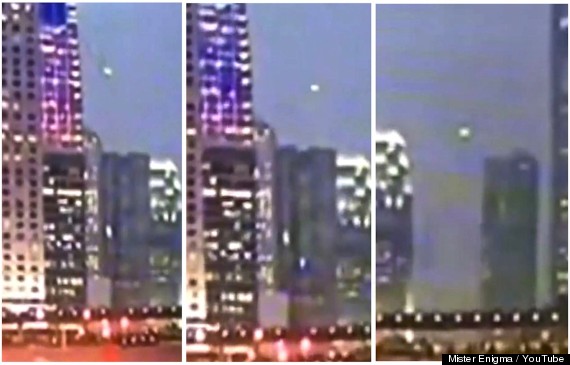 Hansen's not the only visual analysis expert who thinks this object came from good old Earth.

"I agree with Ben. This video appears to me to be a drone, as well," said Marc Dantonio of FX Models. "The vertical acceleration illustrated is not at all unreasonable. Some of these can really punch out of sight fast. The green lights are actually a bit of a standard. Green usually means that the batteries are at full charge and have GPS satellite linkup."

When the object moves across the picture from left to right toward another skyscraper, it appears to be in front of that building (composite image below), before momentarily hovering and then rapidly shooting straight up in the air. 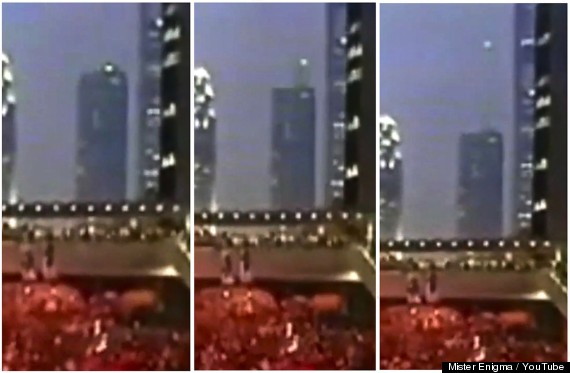 Hansen and Dantonio could be on the mark with their drone explanation.

The BBC posted video taken by a drone on Saturday, showing the large number of protesters in Hong Kong's business district.

It may not be the same drone -- or even from the same day. And this isn't the first time that a drone has been mistaken for a UFO. To drive that point home even further -- adding the icing on the cake -- check out the following video shared with us by Alejandro Rojas of Open Minds Production. The aerial maneuvers that can be achieved by quadcopter drones are astonishing: