An airline pilot claims his aircraft experienced a near-miss with a rugby ball-shaped UFO near London's Heathrow Airport.

While the incident took place last July, the details are only now coming to light through a report issued by the UK Airprox Board, which investigates any aircraft near-misses in British airspace. The Airprox Board reports to the UK's Civil Aviation Authority and generally takes about six months prior to releasing information to the public.

Here's the official report on the incident:

The name of the airline involved and its captain have not been disclosed.

The Captain ... perceived an object travelling towards them, at what appeared to be the same level, slightly above the flight deck windscreen. Having very little time to focus, he was under the apprehension that they were on a collision course with no time to react. His immediate reaction was to duck to the right and reach over to alert the First Officer [FO]; there was no time to talk to alert him. The FO turned and looked at him, thinking something was wrong with the aircraft.

The Captain was fully expecting to experience some kind of impact with a conflicting aircraft. His first words to the FO were, "Did you see that?", who replied, "See what?" The Captain perceived an object pass within a few feet above the aircraft. It could best be described as cigar/rugby ball-like in shape, bright silver and metallic-like in construction. 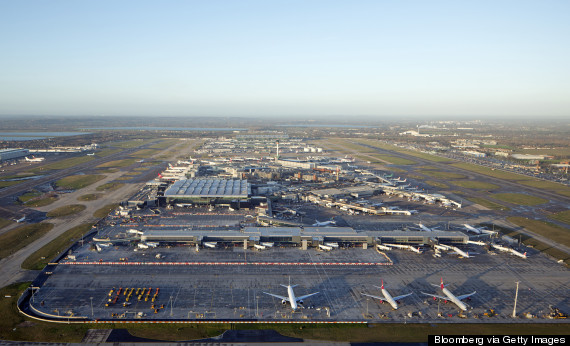 After calming himself down, the captain contacted air traffic control who informed him they had no trace of the unusual object, and "there were no known aircraft in the area at the time and no primary or secondary returns [on their airborne collision avoidance system]."

The captain and first officer subsequently filed an Airprox report.

Heathrow Airport is shown in the above image, looking west, in the direction where the A320 Airbus encountered the unexplained object.

The A320 pilot was subject to a powerful impression of immediate danger, caused by his perception of an object closing rapidly on his aircraft. Although only supposition, members opined that this may have been due to a combination of a possible reflection from the low sun off one of the aircraft to the West, and of the pilot's head movement as he looked forward. After some discussion it was decided that, although the reflection theory held some merit, the overall dearth of information relating to the event rendered a meaningful finding impossible. It was not possible to trace the object or determine the likely cause of the sighting.

When the Ministry of Defence (MoD) stopped officially investigating UFOs in 1969, the Civil Aviation Authority decided to continue looking at UFO reports from airline crews and air traffic controllers to determine any flight safety ramifications.

"Anecdotal evidence suggests aircrew are reluctant to file air-miss reports, but in this case, the pilot did because he believed the risk of a collision was high," wrote David Clarke, a Sheffield Hallam academic and National Archives UFO consultant.

"In the absence of any MoD interest in UFO reports," Clarke wrote, "the Airprox Board is the only remaining official body in the UK with a remit to conduct detailed investigations of puzzling incidents like this one, albeit purely with a safety remit."