A UFO was spotted March 12 during a live morning newscast in Oklahoma City. Shortly after the brightly lit, fast moving object was noticed on screen, KOCO 5 News posted the video on YouTube and asked viewers to offer their opinions of the strange phenomenon.

The KOCO news camera that caught the unexplained light was situated on the roof of the Grand Casino in Shawnee, east of Oklahoma City. The 6 a.m. live broadcast was focusing on morning traffic when the bright object streaked through the sky, moving from left to right.

Watch this KOCO News report on the incident:

In the following composite image of the short UFO flight, it was seen as a streaking illuminated "body." As it moved downward through the frame, it clearly wasn't very high in the sky because it was visible more in the foreground vs. the background, passing in front of objects on the ground until it just vanished and the video ended. 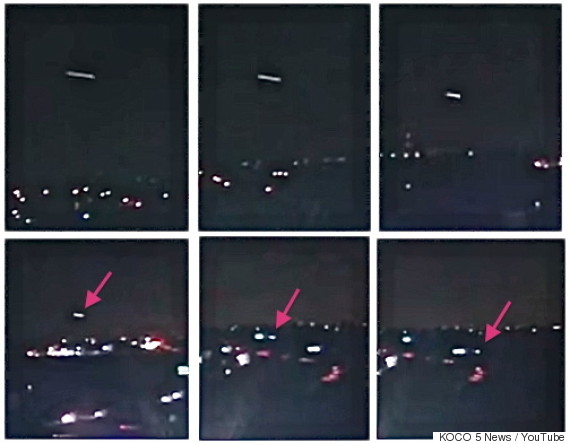 KOCO posted the video to YouTube with this headline: "UFO caught on Live TV flying over Oklahoma City."

The news station solicited comments from viewers: "We caught a flying object on KOCO 5 News in the Morning at 6 a.m. What's your guess on the object shooting across the sky?"

Reports of an unidentified flying object tend to conjure up images of extraterrestrial visitations in the public's mind. Of course, in nearly every case, the phenomena can eventually be explained away. Other sightings, however, remain unexplained.

Here's how some commenters responded:

Ivano Spigariol: "Where's the rest of the video? When it touches the ground, what happens? There is an explosion or not? We want to see original video complete. Bring out the video!"

Bill Griffin: "Did you send a crew out to look in the area where it appeared to touch down or hit?"

Dave Grindley: "Looks like a bird or a bat, illuminated by the floodlights in the foreground."

Shady Brady: "It appears as if the object is traveling around 150 yards a second. It travels from one end of the highway to the other in less than 2. Those cars are easily traveling at around 40 mph. It that's a bird or a bat, it's got booster packs."

R Leveille: "It seems too fast for a plane, drone, Chinese lantern, balloon, swamp gas, and appears to go directly to the ground without any explosion. Whatever it is, it has mad landing/braking skills!"

Stanislav Marec: "That was only light on glass of camera."

Jude Stringfellow: "It makes sense to believe that aliens and demons would feel welcome in OKC."

The following map shows the area where this took place, between the Grand Casino and Shawnee: 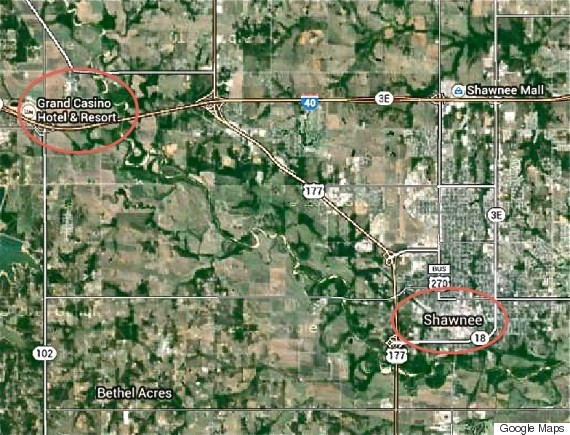 While theories to explain the UFO flowed in from around the Oklahoma City region, KOCO 5 reporter Wendell Edwards said the news station looked for some trace of the object on the ground near Shawnee.

"We didn't find anything," Edwards reported on the air. "But I did call the Oklahoma City Astronomy Club [and its president told me] it is a meteorite, even though it was moving quite fast and was coming in very low."

This is the second time this month that a UFO video was presented online that involved a news organization.

At the beginning of March, a video was posted on YouTube claiming to show a disc-shaped UFO flying in the sky above Buenos Aires during a live news broadcast on the Argentina cable news channel Todo Noticias. That turned out to be a hoax when the news organization revealed the so-called UFO was never actually seen during the live report -- it had somehow been digitally added later by an unknown hoaxer.