Thousands of people at a protest in Sao Paulo, Brazil, Tuesday spotted a mysterious bright light dart and zig-zag across the sky.

A video (above) posted on YouTube the next day shows the small glowing ball moving quickly through the clouds. Onlookers pointed and shouted, excited that what they were looking at was a UFO.

But it wasn't unidentified for long. Another video, also posted on YouTube (below) shows video footage from the flying object's perspective.

That mysterious thing in the sky was a drone with a camera attached, piloted remotely by Sao Paulo news station Folha TV.

Experts in the UFO field -- skeptics and extraterrestrial seekers alike -- agree that sightings are going to skyrocket as drone technology becomes cheaper and more accessible. That isn't necessarily a problem, but many people see any unexplained object in the sky as extraterrestrial, which can lead to fear and general hysteria.

"The whole business of UFOs is sold under the faulty logic of ignorance. We don't know what it was, therefore we know what it was," Joe Nickell, an investigator with Skeptical Inquirer, told The Huffington Post. "If you put anything up in the sky it will end up a UFO to many people."

"We don't call in planes or weather balloons as UFOs anymore, but drones are small, peculiar aircraft," Nickell said. "They're unfamiliar."

Nobody knows that better than Marc D'Antonio. He's a builder of custom models. Along with National Geographic, he constructed a working flying saucer to show just how easy it is to convince a town that there are ETs looming overhead. He flew the drone -- complete with green and blue lights -- over a small town in Connecticut in the winter, drawing reactions of fear, confusion and awe. 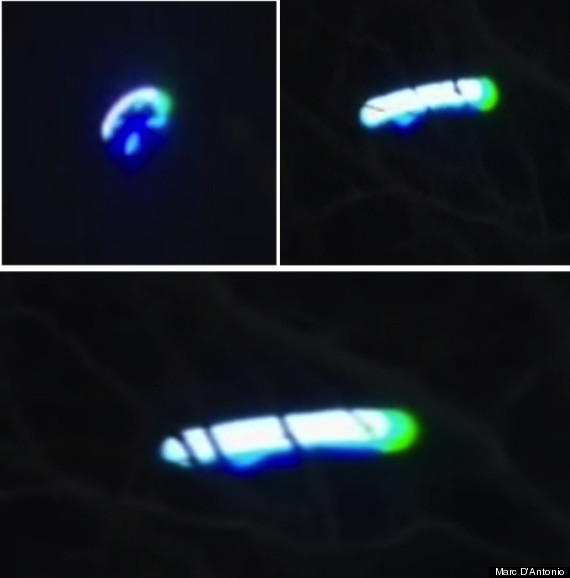 D'Antonio, who also works as the lead video analyst for the Mutual UFO Network, says that tests like these often spark an influx of UFO sightings. His experiment was educational and he revealed himself afterward, but he says some people will fly drones disguised as spacecraft just for laughs.

"[My project] showed I could walk into any hobby shop and in just 24 to 48 hours produce a craft," he said. "As drones become more prevelent, we're gonna see a massive surge of UFO sightings. Already, five percent are probably drone-related. Drones themselves are going to be taking center stage for a great deal of time."

Indeed, in 2011, a crowd of 25,000 protesters in Moscow watched a quad-rotor UFO hover overhead throughout the day. The sight caused mass confusion, OpenMinds TV reported at the time, but it was later revealed to be a local TV station's drone.

There are already FAA regulations in place restricting the altitude at which homemade drones can fly. Commercial and military drones, however, have few restrictions, D'Antonio said. To the untrained eye, any of these aircraft could be easily mistaken as a UFO.

"Many can fly out of sight -- but if they don't, they look weird," he said. "It's easy see drones as otherworldly."