Margaret Pfeiffer was outside her house on Aug. 21, videotaping the aftermath of what she claimed were lightning strikes on her property, when she suddenly noticed a vey bright object in the sky heading quickly downward at an angle, according to OpenMinds.tv.

In one of her YouTube postings, Pfeiffer mentions that she lives in "west central Georgia," with no other details given.

"I captured this after the fire from across the street here," Pfeiffer described on YouTube. "Say what you will, but this has no wings as a plane would have. Watch in full screen and keep pausing. There isn't even a shadow for the wing area. I believe this is a drone or UFO!!"

Several online reports say that the UFO "caused a severe lightning storm out of a clear blue sky." Really? Can anyone actually verify that this unusual brightly lit object had anything to do with possible lightning strikes in the area?

For the sake of credibility, these are the kinds of questions that need answering. But it doesn't detract from the interesting look of the object, seen below in close-up, as it plummets to the ground, disappearing behind trees. 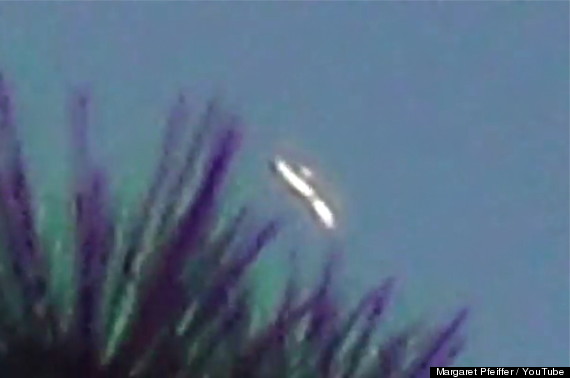 So far, nobody has come forward claiming ownership or knowledge of whatever it was that fell out of the Georgia sky. Nor has any news emerged about wreckage of said object.

In the following video, another YouTube poster, wowforreeel, took Pfeiffer's original video (seen above) and slowed down the action for a better look.

The identity of the Georgia UFO is still up for grabs.