On Tuesday night, Jeff Holko noticed something in the sky above Grand Blanc Township, Mich., that he couldn't explain, so he aimed his cellular phone at it and recorded two-and-a-half minutes of video.

"I'm not saying it's aliens from another planet," Holko said, according to MichiganLive.com. "There was no definitive shape. It was almost the shape of a wedge or a disk. It almost had no structure to it. You could almost see through the light."

At the beginning of the video, two clear, bright lights are seen moving very slowly in the sky, and by the time the clip ends, a third, quick-flashing light can be seen with the other two.

"The object took two minutes to make its way across the field in the video," Holko wrote in his YouTube posting. "We watched airplanes with similar flight paths much higher and faster cross the field in 20 seconds with the roar of the engines. This was completely silent."

So far, Holko and his girlfriend seem to be the only ones to have reported the unusual lights. But was this actually something that falls into the category of truly unexplained?

HuffPost showed the video to photo and video analyst Marc Dantonio, who has examined many alleged UFO images.

"At the conclusion of the video, I was able to affirm my suspicion and call this an aircraft on landing approach," Dantonio told HuffPost in an email. 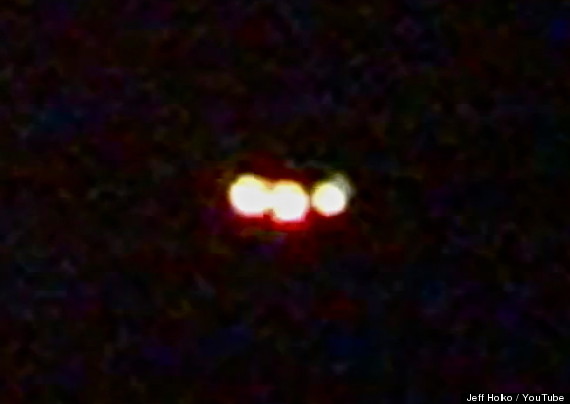 "Aircraft on approach will turn on their landing lights sometimes 70 to 90 miles away from the airport, depending on a number of conditions," Dantonio explained. "When they approach with lights on from such a distance, they will very often appear to be 'hovering' as the witness described when, in fact, they are approaching at a reduced speed -- well over 250 mph, but less than cruise -- and take minutes to get closer." 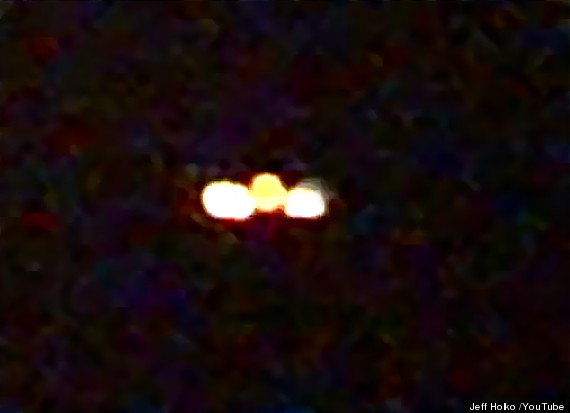 "In this video, the plane appears to be approaching toward the camera more or less, and then near the end, it turns to the right and begins to cross the field of view more quickly. This is very common in these situations," said Dantonio.

"During those last few moments, the belly strobe and one other light are both visible, flashing at frequencies that are quite consistent with aircraft strobe frequencies as mandated by the FAA."

But Holko maintains on his YouTube posting that was no airplane he videotaped.

"This sighting was totally unexplainable [and] it defied basic flight principles. It was way too low and slow to be landing at the airport in addition to going the totally wrong direction," Holko said.

And getting the last word in here on a typical back-and-forth UFO argument, Dantonio said, "My assessment, with near 100 percent certainty in this case, is that this was another commercial aircraft landing light case."

Here are other UFO cases that weren't necessarily unexplained