Talk about an uninvited guest at the Olympics.

The disc-shaped object is first seen entering the upper left portion of the video as the fireworks erupt over the stadium. The UFO -- which appears to have a dome or bulge rising from its center -- moves slowly across the sky as if deliberately observing the light-show spectacle below it.

While NBC Olympics -- a division of NBC Sports -- has chosen Goodyear blimps for all of its 2012 Olympics aerial coverage, the strange-looking object that appeared over the opening ceremonies doesn't appear to be a blimp.

So what was it?

On an evening that included an apparent Queen Elizabeth and 007 agent James Bond parachuting out of a helicopter into the Olympics stadium, most people probably wouldn't have been surprised if a staged UFO was also on the entertainment menu, just two weeks after the U.K. released its most recent batch of UFO documents. 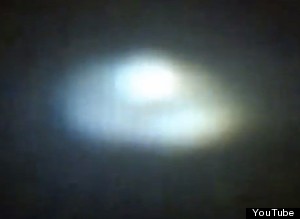 Last month, former Ministry of Defense UFO desk officer Nick Pope suggested that a huge event like the London Olympic Games, could present itself as a prime target for otherworldly craft to show themselves to a gigantic viewing audience.

"With the summer of mass events, we are all on high alert for terrorism. But we must also cast our eyes further afield and be prepared for even the most seemingly unfathomable," Pope said, according to PressTV.

Pope wrote earlier this year of a conspiracy theory rumor that suggested a fake alien attack would be staged at the London Olympics.

"A combination of special effects and holographic technology will be used to create the illusion of an alien invasion, the rumor claims," Pope wrote on TruTV.com.

"If aliens have studied our psychology, they may choose to appear in our skies on a significant date -- the closing ceremony of the Olympic Games is one date being widely circulated by conspiracy groups," PressTV quoted Pope.

Watch this enhanced video of the Olympics UFO.