A very odd and confusing UFO report has emerged from India. An online video appears to show an unidentified flying object very close to the white marbled Taj Mahal monument in Agra, Uttar Pradesh, India. And that's where the confusion begins.

First of all, the MSN News headline about this incident is misleading when it states: "Rumor: UFO Over Taj Mahal Seen By Indian Army."

According to The Inquisitr, Indian army troops reported UFOs, but the objects in question weren't at the Taj Mahal -- they were part of a continuing wave of UFO sightings by Indian troops and the Indo-Tibetan Border Police Force near the border of India and China.

In fact, there doesn't seem to be any connection between the India-China border UFO reports and the Taj Mahal video, seen below:

After looking at the Taj Mahal video, MSN News suggested, "The video in question looks mysteriously like a bug on the camera screen."

Really? Another look at the video clearly shows, as pointed out by Open Minds' Jason McClellan, "The object in the video remains fixed in the sky, rather than moving with the camera as it pans, as it would if the object were simply a bug on the lens."

There doesn't seem to be an individual's name connected to it. It appears to have been posted to YouTube on July 31, 2013, by UFOPrimeTube, which also has a collection of other alleged UFO videos on display.

Under the best of circumstances, when someone posts a UFO video on YouTube, it's accompanied by a description of the background story of the video. In this case, instead of any such helpful narrative, there's a very lengthy list of "tag line" phrases -- a list that goes on and on, for no apparent reason, other than to distract the reader's eyes.

Pictured below is an extreme close-up of the supposed "bug" UFO at the heart of the matter. 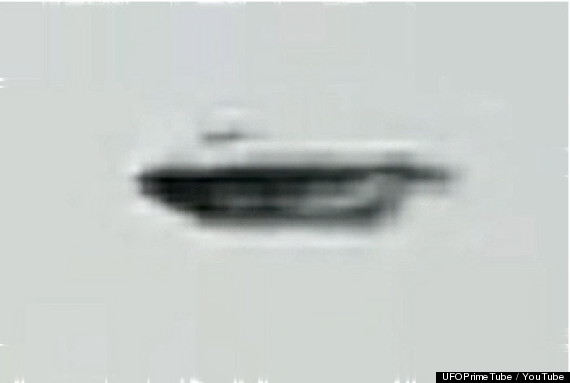 Let's give the last word to some of the comments of this UFO:

"I also would pan away from a ufo if I was video recording it. Idiots"

"This is so fake that you can taste it!"

"As much as i believe in UFOs, and ETs, this i don't think is real. that thing looks like a REALLY bad composition job of a VFX student"

"And not one person down below acted differently...More than 1000+ people would have seen it and acted with surprise, but nobody did. If people did act and the UFO didn't look out of place, then this would be one of the greatest UFO sightings to date!"

"This is an example of extremely poor use of CGI. The author didn't take the video's fps into account. The rotating portion at the top of the supposed craft skips frames as you can see in the slow-motion replay, while the rest of the features in the video move fluidly. And don't get me started on the beginning of the video where the craft teleports, or how its subsequent movements are extremely jittery/jumpy because the author (read: hoaxer) didn't use any motion-tracking software."

Just another day in the world of UFO videos.