It was said to be one of the best photos of a UFO, and a poster-size image of it hung on a wall of Britain's Ministry of Defence. But then, at some point between 1991 to 1994, it vanished, gone, never to be seen again.

On the day in 1991 that Nick Pope interviewed for the position of chief of the Ministry of Defence's UFO office, he could not help but notice the UFO image on the wall. "I went in for an informal interview, and anyone sitting in that office found their eyes drawn to that image," Pope told The Huffington Post.

Other original pictures, negatives and the wall poster somehow vanished in the 1990s. Only a Ministry of Defence line drawing remains.

The photo was one of six taken by a pair of hikers who spotted a strange diamond-shaped object in the sky over Pitlochry, Scotland, on Aug. 4, 1990. It appeared to hover in the air near an Royal Air Force Harrier jet. Eyewitnesses reported seeing the unusual object above the ground for nearly 10 minutes before it zoomed away at high speed.

The 1990 incident was described in a batch of previously classified UFO files released by the Ministry of Defence in 2009.

Pope told The Huffington Post that it was the ministry's official policy to obtain as much information as possible in the case of a UFO sighting, such as photo negatives. The pair with the photos contacted the staff of a newspaper that planned an article; the newspaper, in turn, reached out to the Ministry of Defence for additional information, Pope said. That's when the ministry requested and obtained the original photographs and negatives from the newspaper, he said. "From everything I know about the defense intelligence staff, they would have done that."

The incident took place just before Pope took over the ministry's UFO division in 1991 to 1994. When he started his job, Pope couldn't help staring at the enlarged image of the UFO on his office wall.

"It looked like a diamond on its side; it was three-dimensional, meaning it had some depth to it," Pope recalled. "It was a dull, metallic gray color. But the most disconcerting thing about this was [that] despite its large size -- over 80 feet in diameter -- there was an apparent lack of any real aircraft-like structure to it.

Watch this National Geographic report about the disappearance of the UFO photos in Scotland:

"Moreover, there was no apparent propulsion system and no markings," Pope added. "This made us think that whatever it was, it clearly was a technology significantly ahead of anything we had in our inventory or even on the drawing board."

Pope described another reason for interest in the object: "There was no apparent sound from the craft, especially with it being within a couple hundred feet of the eyewitnesses."

"Naturally, we wanted the propulsion system," he added. "And if we couldn't get it, we wanted to at least try and understand the principles on which it might work because that might play into research and development."

"This wasn't the archetypal distant, blurred UFO photo," Pope added. "This was up close and personal, reach-out and you-can-touch-it stuff. 'I don't know what it is, but it's not one of ours' was the stock answer to the inevitable question. Word got around and people would swing by to take a look, even when they had no obvious business in our section."

According to Pope, his superior officer was convinced that the object in the UFO photo was a secret, prototype aircraft from America. But after assurances from U.S. authorities that they weren't testing anything like that over the United Kingdom, Pope's boss took the poster down and locked it away somewhere. 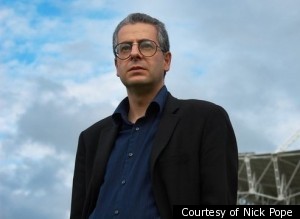 "The original photos were sent to the defense intelligence staff, who then sent them on to imagery analysts at the Joint Air Reconnaissance Intelligence Center," said Pope, at right. "At the time, [the Ministry of Defence] hadn't even publicly acknowledged that there was any intelligence interest in UFOs. Though we'd never say so publicly, the bottom line was that we wanted the technology. It was better than anything we had and we wanted it for our own military aircraft and drones."

"I would not put myself in the [UFO] believer camp," Pope said. "But if I was going to end up there, this case, in terms of evidence, would give me a big push in that direction."

Why does this UFO story continue to surface every few years? Because like the legendary tales of the Roswell, N.M., UFO crash of 1947 or the infamous top-secret world of Area 51 in the Nevada desert, some mysteries are not easily put to rest.

With eyewitness accounts, high-level government interest and the sudden disappearance of the visual forms of evidence (the photos and negatives), the 1990 incident has all the ingredients that UFO legends are made of.

Most UFOs can be easily explained. Check out these scenarios:

CORRECTION: In a previous version of this story, we had the word "infantry" instead of the correct "inventory," which now appears.