In just a few weeks, some kind of UFO-related secrets will be revealed at a Smithsonian Institution affiliated museum.

That's the implied promise in the title of a special lecture coming up at the National Atomic Testing Museum in Las Vegas on Sept. 22.

The secrets haven't yet been revealed, but the players involved certainly present the potential for something intriguing to emerge from this one-night event that's part of the museum's ongoing Area 51 lecture series.

Watch this promo for the upcoming UFO lecture at the National Atomic Testing Museum.

"We looked at bringing in some people to talk about extraterrestrials and UFOs," said museum CEO and executive director Allan Palmer, a highly decorated former Air Force and Navy combat jet fighter.

"We wanted to concentrate on people who had personal stories and exposure to what they thought were real UFOs from the military side, because they might have just a little more credibility than your average Joe," Palmer told The Huffington Post.

Four of the participants had previous American military security clearances:

Ret. Air Force Col. Charles Halt: Former base commander of the RAF Bentwaters military base in England and vital eyewitness to the amazing UFO-related events at Rendlesham Forest in December 1980, where he believed the observed UFOs were extraterrestrial in origin. 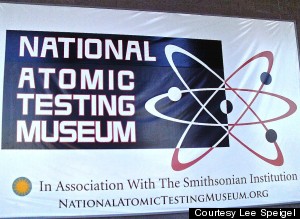 What's going to be different about this one-time lecture compared to previous gatherings where military personnel have stepped forward to reveal details about personal UFO experiences?

"One of the things that is different is that you have high credibility vetted sources," Alexander told HuffPost. "What you're getting from this panel are people who have worked with the military, all of whom certainly agree that UFOs are real, and I think most of them would say it ought to be researched.

"Here, you're getting a small number [of participants], but high credibility people."

At the Sept. 22 lecture, Pope will speak of the similarities between how the U.K. and U.S. governments had similar UFO study groups and why both countries officially got out of the UFO business.

"In both instances, the bottom line was that we wanted Joe Sixpack off our backs. Strip out all the mistaken sightings of weather balloons and dump all the crazies, and we might just have something worth looking at," Pope told HuffPost in an e-mail.

"But you can't do that in a public UFO project, because it's a kook magnet," he said. "The trick is to highlight all the crazy stuff in the media, so the subject becomes a joke, pull the plug, then run the whole thing covertly. Now I'm not saying this is exactly what happened, but if an Air Force pilot sees something unusual and it's tracked on military radar, does anyone seriously think we wouldn't be interested?"

While none of the participants of the upcoming lecture have offered a preview of any UFO revelation, Pope promises to disclose "some hitherto unrevealed secrets of the British government's UFO project."

This isn't the first time the Las Vegas museum has offered a provocative UFO presentation. 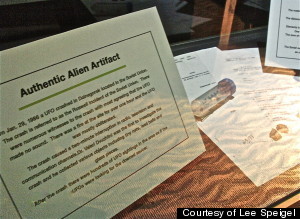 Back in March of this year, the Smithsonian venue opened its doors to an ongoing exhibit called "Area 51: Myth or Reality," providing a comprehensive look at the historic records of the most secret military installation in the country.

Among the many items displayed are materials presented as "Authentic Alien Artifact" -- samples of small objects originating from an alleged UFO crash in Russia.