LAS VEGAS -- Former Air Force Col. Charles Halt accused the federal government of a UFO cover-up that involves a secret agency to deal with what might be extraterrestrial visitations.

"I'm firmly convinced there's an agency, and there is an effort to suppress," Halt told an audience of 200 people Saturday night at the Smithsonian-affiliated National Atomic Testing Museum.

Two former Air Force officers who were part of the infamous Project Blue Book -- the military's official UFO investigation in the 1950s and '60s -- and a former investigator with Britain's Ministry of Defense were among the panel of speakers for a program entitled "Military UFOs: Secrets Revealed."

Halt, pictured below, was the deputy base commander of the RAF Bentwaters military base in England and one of numerous eyewitnesses to several UFO-related events at Rendlesham Forest in December 1980. He believes the observed UFOs were either extraterrestrial or extradimensional in origin. 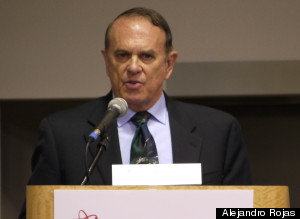 "I've heard many people say that it's time for the government to appoint an agency to investigate," Halt said.

"Folks, there is an agency, a very close-held, compartmentalized agency that's been investigating this for years, and there's a very active role played by many of our intelligence agencies that probably don't even know the details of what happens once they collect the data and forward it. It's kind of scary, isn't it?

"In the last couple of years, the British have released a ton of information, but has anybody ever seen what their conclusions were or heard anything about Bentwaters officially? When the documents were released, the timeframe when I was involved in the incident is missing -- it's gone missing. Nothing else is missing," he said.

Halt added that he's never been harassed over the reports he made about the Bentwaters UFO incidents.

"Probably for a couple of good reasons. Number one, my rank and some of the jobs I've held, but also very early on, I sat down and made a very detailed tape and made several copies of everything I know about it and they're secluded away. Maybe I'm paranoid. I don't know, but I think it was time well spent when I made the tapes."

While the lecture panel members didn't always see eye-to-eye on the details of specific UFO cases, one common thread ran through them. 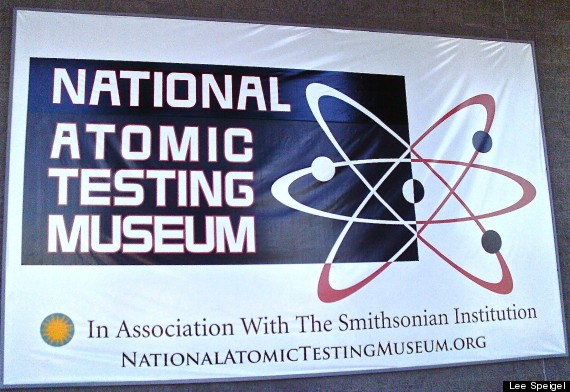 "We share a couple of very important things: We've all been dedicated to serving our country and been very serious about it," said museum CEO and executive director Allan Palmer, who had a distinguished career as a decorated jet fighter pilot for both the Air Force and Navy.

"These are not flaky people, who've all held very responsible positions with high-level security clearances. They're not the kind of people who tend to imagine things or go off on a wild tangent on something. They're very professional, very business-like," Palmer told The Huffington Post.

The controversial study ended in 1969, concluding that there was nothing about UFOs which represented "technological developments or principles beyond the range of present-day scientific knowledge." 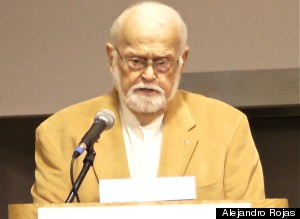 Coleman, at left, recounted his own riveting encounter with a UFO while he piloted a B-25 bomber in 1955. The unknown circular object descended from an estimated height of 20,000 feet, heading to the ground, when Coleman attempted to pursue it.

"We were moving at maximum continuous power for the B-25, about 300 miles an hour, and we got right down to the treetops and I closed in on it very rapidly. I said I was going to overtake it -- 'Hang on and put your seat belts on' -- and I made a hard 90-degree bank to try and pull up alongside of [the UFO] and it wasn't there.

"I zoomed up about 1,500 feet, and then I could see the object right on the deck over a freshly plowed field moving at a pretty good speed, and it [was trailing] two vortexes." When Coleman dove behind the trees to try and "head him off at the pass," the UFO was gone. He said it was a typically reported flying saucer.

Coleman concluded his part of the lecture by offering a possible reason why ETs may be hesitant to visit Earth:

During the time that Coleman was the Project Blue Book spokesman, the director of the Air Force study was Col. Bob Friend. He disagreed with the Air Force's negative conclusions about UFOs in 1969.

"My primary explanation for these things is that, yes, they're real, and I think it would be much better if the government or some other agency was to take on these things and to pursue the scientific aspects of it," Friend said. 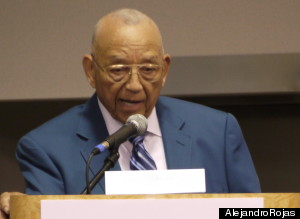 At Saturday's lecture, Friend, at right, offered an olive branch to the many people who claim to have seen UFOs but have been reluctant to report them out of fear of not being taken seriously.

"UFO sightings are real, and you will not be ridiculed by any honest organization that investigates it. Just come forward, quote your case and allow people to investigate what they can to make some determination about what it is that you've seen. In the future, just remember that we're on your side."

Nick Pope, the civilian member of the UFO panel, acknowledged that many in the audience came to the lecture anticipating the revelation of mind-blowing UFO evidence.

"While I apologize to those people who might be expecting or hoping for a 'spaceship in a hangar' smoking gun, what you are getting is the real deal: an insight from people who have looked at this mysterious and infuriating subject for the government," said Pope, a former UFO investigator for the UK Ministry of Defense.

"The UFO subject is a field which does have its fair share of crackpots and charlatans and cultists. What you have this evening in a field like that is a panel of people who indisputably and genuinely have done this for the government and the military."

Pope recounted how the UK's former official committee, known as the Flying Saucer Working Party, concluded in 1951 that UFOs were just misidentifications, hoaxes and delusions, and that no further time or effort should be wasted on the subject.

"Unfortunately for them, in 1952, there was a wave of sightings throughout the UK, where most of the witnesses were Royal Air Force pilots, some of whom chased these things, and many radar operatives tracked them," Pope said.

As the Ministry of Defense continued investigating UFOs, Pope noted, they kept a close watch on the UFO "community." "We anonymously subscribed to their magazines: Subscription, please send to John Smith, P.O. Box 007, London -- that was us. And I even covertly slipped into the back of UFO conferences."

Pope concluded by saying that the Ministry of Defense always had one thing on its mind about UFOs: "Whatever the nonsense you see about this subject sometimes in the field, we never lost sight of the fact that, in all of these hundreds of thousands of sightings, the believers only had to be right once, and everything changes."

Another UFO lecture panelist, retired Army Col. John Alexander, was a former military insider who convened a special group in the 1980s called the Advanced Theoretical Physics Group, whose members were culled from the military services and the aerospace and intelligence communities. They concluded that while there had been numerous cases of credible UFO encounters, the group couldn't find any evidence of any actual government cover-up.

Alexander cited a variety of intriguing UFO cases involving pilots and told the audience that UFOs are "real and is a global phenomenon -- not something that just happens in the U.S.

"We need to make it permissible for scientists to discuss and research these topics. ... There are no simple answers, and not only do we not have the answers, we're not at the point of asking the right questions yet, and that's what we need to do."

The lecture included a spirited question-and-answer session in which the audience engaged the panel on a variety of UFO-related topics, trying to draw out more detailed revelations.

While no ET body or piece of alien spaceship was brought forward and presented to the audience, those who attended the presentation seemed to appreciate the participants' candor.

Still, the audience probably left with more questions than answers.

Check out these UFO items.