Despite the fact the UK's Ministry of Defense officially ended its UFO investigations in 2009, it appears that the British Civil Aviation Authority decided -- unbeknownst to the public -- to continue collecting reports that involved UFOs with possible flight safety issues.

"They were only interested in sightings that definitely had a bearing on aircraft or flight safety, and were no longer interested in reports from the public, who'd seen things in the sky and reported them to the Civil Aviation Authority," said David Clarke, the official UK National Archives consultant and a journalism lecturer at Sheffield Hallam University. 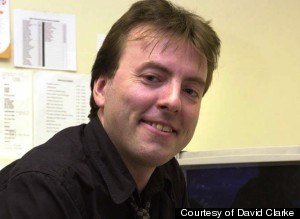 Clarke, seen at right, told the Huffington Post that the Civil Aviation Authority -- a different government department from the MoD -- kept separate records of UFO cases, "not only by the aircrew, themselves, but also anything unusual that was seen by air traffic controllers on the ground at airports."

Through the filing of Freedom of Information requests, Clarke found that the Royal Air Force specifically requested any UFO reports submitted to the Department of Transport would no longer be forwarded to the MoD.

The RAF specifically states that "members of the public who make such reports are not encouraged to believe an investigation will take place."

It's now known that British air traffic controllers have been receiving UFO reports on almost a regular basis.

Speaking on the BBC Radio's "Today" programme, on Aug. 17, Richard Deakin, the head of the UK's National Air Traffic Control Services, was asked if he or his staff had ever been unable to identify a flying object.

"Well, occasionally, there are objects that are identified that don't conform to normal traffic patterns -- not just from the UK point of view, but from around the world," Deakin responded. "I have to say it's not something that occupies a huge amount of my time."

Deakin added that these sightings occur "typically around one a month."

If that's true, then Clarke's calculations of how many actual UFO sightings were written up as Mandatory Occurrence Reports, or MORS, was substantially higher.

"As far as MOR reports that I got from using the Freedom of Information, from December 2004 to October 2010, their actual database listed 10 instances of UFOs or unidentified aircraft," said Clarke.

"Now [Deakin] is saying they get a report every month," he added. "If that was the case, I'd expect it to be 80 in that six-year period, not 10. So, my question is: Where did all the others go?"

This comes on the heels of the Ministry of Defense's ruling that all UFO investigations in the UK have come to an end. According to the MoD's website:

The MoD has no opinion on the existence or otherwise of extra-terrestrial life. However, In over fifty years, no UFO report has revealed any evidence of a potential threat to the United Kingdom. The MoD has no specific capability for identifying the nature of such sightings. There is no defence benefit in such investigation. Furthermore, responding to reported UFO sightings diverts MoD resources from tasks that are relevant to defence.

UK pilots have reported a number of chilling near-misses with UFOs.

One incident involved David Hastings, a British pilot pictured below, who, along with his co-pilot, David Paterson, was flying a Cessna Skymaster plane over the Mojave Desert in America on Sept. 9, 1985. 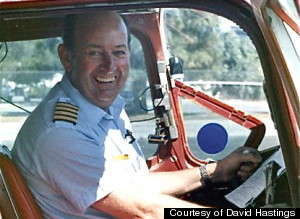 "We were sitting there enjoying the sunshine when we both suddenly saw this speck out on the horizon at our 12 o'clock position," Hastings told HuffPost.

"This speck suddenly grew extremely quickly until we saw this huge shadow go over the top of us," he recounted. "But the most amazing thing about it was there was no noise and absolutely no movement or turbulence at all. We looked at each other, saying, 'What the hell was that?'"

At that point, both pilots felt that something was in the air off the port (left) side of their plane, but they couldn't see anything there. They agreed that they were able to sense something moving outside.

Hastings walked to the back of the plane, grabbed his camera and returned to the cockpit where he snapped two pictures out the window. All he was able to see in the camera viewfinder was the left wing of the plane and the ground below. 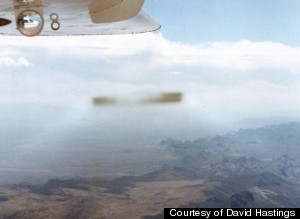 It was only after they returned to San Francisco and got the pictures developed that they knew they'd encountered something extraordinary.

"One picture showed what we expected to see -- the aircraft wing and the ground," said Hastings. "But in the second one, there was this [cigar-shaped] thing. We were both convinced that it was not a manmade object.

"Several pilots have seen UFOs in England, so it didn't surprise me, but I was surprised that we actually got a picture of it."

Hastings recalls that, although he wasn't frightened by the object, he was mostly concerned about the initial encounter with it and the possibility of a mid-air collision. No hoax was ever determined in this case, which remains unexplained to this day.

Why do aviation officials avoid talking about UFOs? In the UK, Clarke suggests it's something that could result in bad publicity.

"Don't forget, this is a commercial operation and the aircrew are very reluctant to file a report because the airline companies don't want them answering questions about things that aren't part of the corporate image."

Watch this 2007 UK television interview with a pilot who saw an enormous UFO over Guernsey.

Check out these UFO encounters.